The power of time zones 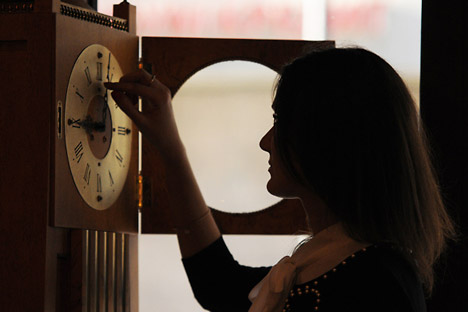 Jennifer Eremeeva talks about the consequences of Russian President Dmitry Medvedev's decision to cancel the winter time and reduce the number of time zones.

The plane from Budapest landed at Sheremetyevo with a thud. Heedless of pleas in three languages to wait until the plane reached the gate, everyone, including the flight attendants, pulled out phones and switched them on.

“What time is it?” I asked HRH, my “Handsome Russian Husband.”

“It’s 6,” said HRH, who never changes his watch from Moscow time, no matter where he is in the world.

In my iPhone’s “Date and Time Settings,” I slid the knob on “Set Automatically” to the right. The screen flickered, then showed 5 p.m. Defeated, I scrolled down to “Set Date & Time” and adjusted the time manually to 6 p.m.

“There’s a potent symbol of the Medvedev legacy,” I said to HRH, “He’s such an Apple junkie and yet every one of their devices, even the iPad, refuses to acknowledge current Moscow time.”

HRH shrugged and motioned me into his passport line, which always moves faster.

“Poor old Medevev,” I said to HRH in the car on the way home, “he’s going to end up one of those incredibly short chapters in Russian history like Feodor II or...who was that guy who came after Stalin?”

“Malenkov,” said HRH as he cut off a Honda in mid-lurch, thereby gaining four more inches of wiggle room.

“All anyone is going to remember about Medvedev is that the number of Russia’s time zones was reduced from 11 to 9.”

What Rasputin-style adviser, I wondered, convinced Medvedev to reduce the number of time zones, once a proud Soviet 16, down to a pathetic 9? Who told him that he’d get a surge in his approval ratings?

“Listen,” said HRH, “reducing the number of time zones might make good business sense, but canceling daylight savings time has to have been part of the next guy’s election strategy. There is no upside for millions of children going to school in the pitch-black dark.”

In 2011, as part of the time shuffle, Russia “sprang forward” in March but did not “fall back” in October. Medvedev tweeted that the change would reduce Russians’ “stress and illness,” as well as bring them closer to Asia. But many find the convenience of a conference call to Shanghai does not make up for the extra hour it now seems to take on the return from a weekend shopping trip to Europe.

On the news that night, The Frontrunner in the presidential election (Prime Minister Vladimir Putin) fielded complaints about the time change from a group of entrepreneurs. “I’m not opposed to a review,” he said.

Jennifer Eremeeva is a a freelance writer and longtime resident of Moscow. She is the curator of the culinary blog, www.moscovore.com, and the humor blog www.russialite.com.