US wants to come back to Asia 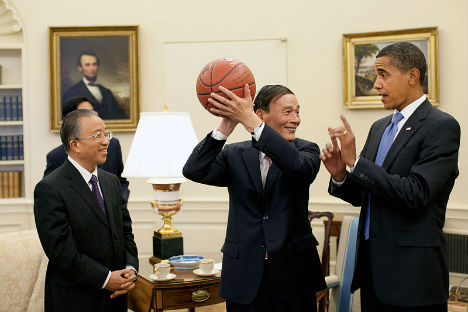 Chinese Vice Premier Wang Qishan, center, holds the autographed basketball given to him by President Barack Obama following their Oval Office meeting Tuesday, July 28, 2009, to discuss the outcomes of the first US–China Strategic and Economic Dialogu

Russians and the Chinese have a common platform, maybe anti-US at this point of time making Washington concerned, but the new Chinese leadership to take over in 2012-2013 renews the US hope for positive relationship with the Asian power, Indian analyst Dr. Rajeswari Pillai Rajagopalan says.


In 2008 when President Obama took over as the President of the United States there was a lot of optimism to build on and sustain the US – China relations, particularly in the economic realm. We should also remember that before the time when the global financial crisis was beginning to hit the United States and other parts of the globe the economic focus in the bilateral relations between the US and China was very, very important, and particularly the component of Chinese buying large amount treasury bonds from the United States, it was a significant factor guiding the US – China relations.

This was one major imperative for the continuing of good relations between United States and China in the first year. But in the second year of the Obama Administration there was a drastic change of moving away from that optimistic note of US – China relations and moving towards very strained tense relationship.

Dr. Rajagopalan believes this was driven by a couple of factors. One was the fact that the US had their sanctions because of the US - Taiwan defense package being to about $6.5 billion. And the second is also the growing assertiveness of the Chinese in the neighbouring area. There were a number of incidents on the sea against the US large ships or even the Japanese ships. And also the meeting of Dalai Lama in Washington in 2009 was an incident that hurt the Chinese leadership. All of these incidents in fact set back the US – China relations in 2009.

Now with the new Chinese leadership that is about to take over in 2012-2013 there is a renewed hope in Washington that it will be able to pursue positive relationship with China. There are compelling reasons why Washington would like to pursue positive relations with the Chinese. Firstly, China is one of the permanent five veto power countries in the UN Security Council. And there are several issues that are pending within the United Nations Security Council – be it the action on Syria, the Iran issue. They all come up to the United Nations Security Council, and so far in line with Russia, China has held the veto power and did not go along with the United States in pushing for certain punitive measures with regard to Syria and Iran issue.

Dr. Rajagopalan reckons that the rise of China has always been a factor that worried Moscow at some level but at the same time given the policy adopted by the West whether it is the US policy on the missile defense or the NATO’s expansion into Russia's backyard – these are issues that continue to worry Moscow that - actually you guys are not trustworthy chaps. But at the same time, given this kind of sentiments Russians and the Chinese are actually beginning to feel that they have something to work for, there is a common platform which is maybe anti-US at this point of time but they do feel that they can work on some of these issues.

At some level Washington is concerned about this development of Russia and China coming closer ever than before. So, they also want to make the effort of reaching across to the new Chinese leadership that maybe more than once turn its approach towards Russia and the United States in a way that it doesn’t hurt the United States.

It has largely been acknowledged that Asia is the center in the 21st century. But there are several issues that still restrain the US – Asia relationship. For instance, the demand of defense cuts that the United States is forced to make in the Pentagon at this point of time is going to have a dent on the kind of defense portioning, military portioning that the United States will be able to do in Asia-Pacific. Having said that I think the US wants to come back to Asia in a big way and also all the countries in the region are welcoming the United States in a big way.

According to Dr. Rajagopalan, this has happened for two reasons. In the last decade, the countries in South East Asia were adopting a “wait and watch approach” towards the rise of China. There was this thought that China could rise as a more benign power, more of a stethoscope power than otherwise.

All the major countries in the region have got excellent relationship with China on the economic front. In fact if you look at India – China trade – it is almost like 70 billion going out from about 4-6 billion a decade back. But looking at the political and strategic relationship, there is increasing suspicion as to what kind of China would it make as it grows even stronger in the future. There is also the rise of China in the military terms and the lack of transparency.

Asia unfortunately is characterized and ensured with a lot of problems like most of the Middle Asian powers – that is China – India, China – Japan, China – Taiwan – all of these countries have huge baggage of history where there are unresolved border and territorial problems and also the cultural issues – the issue that the East China sees as a secondary sort of issues and at the front is getting border and territorial dispute.

Obviously on the one hand everybody would prefer that the status quo is maintained so that the United States is not to some kind of a very touchy situation because they have some kind of commitment towards the Taiwanese, to safeguard their interests but at the same time they don’t want also to be economically dependant on the Chinese for a variety of reasons. So, there are different forces that come into play. It’s not a very simple, straightforward regional game.

But at the same time Dr. Rajagopalan thinks that as the new leadership takes over in China they look forward to a good start and would want to cultivate better ties and also would manage the rise of China in such a way that it does not become a threat to the region or regional security issue and emerges as a regional security architect also.

Based on the interview with Dr. Rajeswari Pillai Rajagopalan, Senior Research Fellow at Observer Research Foundation in India.