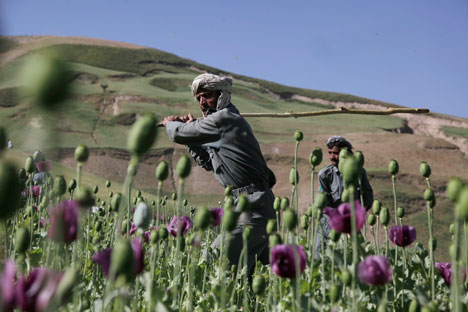 This month Washington whose commitment to fighting drug production in the US occupied Afghanistan is widely called into question rolled out a new plan of coordinating the activities of Central Asian republic's anti-narcotic agencies. The initiative was, however, promptly blocked as potentially counterproductive by Russia, the country hit hardest by the Afghan drug output.

In essence, the US plan codenamed The Central Asia Counternarcotics Initiative (CACI) amounts to forming, with the funding from Washington and under its oversight, special drug enforcement units with extensive powers including access to the operational materials and databases of the police and security agencies of the host republics. All of the five Central Asian republics were invited to join the program which also had to be endorsed by the US, Russia and Afghanistan. Support for CACI was supposed to be expressed in Vienna on 16 February at the Third Ministerial Conference of the Paris Pact Partners on Combating Illicit Traffic in Opiates Originating in Afghanistan in the form of a collective resolution, but passing it proved impossible due to the resistance mounted by Russia.

Serious suspicions arise in connection with Washington's bid to tap, in the framework of the program, into the bulk of classified data maintained by the law-enforcement agencies of the host republics, as the information can easily be invoked to exert pressure on Central Asian administrations. Moscow cited the argument to convince its Collective Security Treaty Organization partners – Kazakhstan, Uzbekistan, Tajikistan, and Kyrgyzstan – to refrain from signing the statement drafted by the US.

The US agenda behind the initiative is to gain stronger political and military positions in Central Asia, while Washington actually lacks the resolve to take practical steps towards suppressing Afghan drug production and trafficking. The US tendency to cultivate relations with Central Asian republics on a bilateral basis and to route around Russia and the Collective Security Treaty Organization is seen in Moscow as evidence of the above, and the explanations like the one offered by US Assistant Secretary of State for the Bureau of International Narcotics and Law Enforcement Affairs William R. Brownfield – that the US is neither a member of the group nor even an observer in it – indeed sound unconvincing as it remains unclear why the circumstance should hinder multilateral cooperation in countering the drug threat.

Drug production in Afghanistan has reached ominous proportions and is known to be swelling. According to the UN Office on Drugs and Crime, the country's narcotics output rose by 61% in 2011 compared to 2010 – from 3,600 to 5,800 tons. Notably, over the time the area used for drug cropping expanded only by 7% and most of the output increase is attributable to bumper harvest across the drug plantations. A circumstance not to be overlooked in the context is that the opium prices are rising continuously and added 133% in 2011, meaning that demand for drugs is currently outpacing supply. In 2010, opium price growth was driven by supply contraction as a fairly mysterious fungal decease wiped out a large part of opium poppy crops. Drug production did start to climb in 2011 in the regions where the epidemic had taken place, even in Kapisa, Baghlan, Faryab provinces formerly reported to have completely dropped out of the game.

Overall, drug production has become the key sector of the Afghan economy over the period of the US occupation, and the fact by all means merits deeper analysis. The UN currently estimates the 2011 revenues of Afghan poppy farmers to top $1.4b, which is equivalent to 9% of Afghanistan's GDP.

Deploying US special forces in Central Asian republics is a recurrent theme on Washington's foreign policy agenda. In 2009, for example, the US declared dispatching to all the five of them commando units charged with the mission of keeping secure NATO's Northern Supply Route To Afghanistan. The White House went public with a plan to construct security infrastructures in Central Asia in August, 2010. Specifically, US Central Command's counter-narcotics fund intended to pour over $40m into building training compounds in Kyrgyzstan's Osh and Tajikistan's Karatog plus a canine training facility and helicopter hangar near Almaty in Kazakhstan, and into an upgrade of a number of border-crossing checkpoints in Uzbekistan, Tajikistan, and Kyrgyzstan. In the majority of cases, the installations are strategically located – for instance, a facelift awaited Turkmenistan's Sarahs checkpoint sited on the Turkmen-Iranian border and Kyrgyzstan's checkpoint in the proximity of Batkent, a position key to the Fergana Valley.

The US interest in Kyrgyzstan drew ample media coverage. Talk began years ago that a US military base was about to pop up in the southern part of the republic which is traversed by a major drug-trafficking route. The June, 2010 outbreak of ferocious inter-ethnic fighting in the Osh and Jalalabat provinces of Kyrgyzstan is oftentimes blamed on the drug mafia. Ousted Kyrgyz president K. Bakiyev, by the way, was markedly unenthusiastic about admitting to the republic a Russian military base or one to be ran by the Collective Security Treaty Organization but seemed open to the idea of a training center functioning under the US control.

Speaking of the cooperation under the umbrella of the Collective Security Treaty Organization, its drug enforcement coordination must be credited with steadily improving efficiency. The Kanal-2001 raid jointly launched by the group's members last December led to the seizure of 16 tons of drugs including 500 kg of heroin, over 2 tons of hashish, 9 tons of opium, and around 130 kg of cocaine. In concert, the Treaty partners' law-enforcement agencies opened over 21,000 criminal cases, 3,400 of them being related to illicit drug circulation. It is indicative of the progress being made that the grab in a similar 2010 stint was modest in comparison, totaling just 7 tons of drugs, while the number of agents involved was several times higher. Moscow's bilateral ties with Central Asian republics in the drug enforcement sphere also help – thanks to the Russian assistance, Kyrgyz border guards managed to boost the amounts of confiscated narcotics by a factor of 23 over just one year.

The US push for the creation and operation under its control of an alternative Central Asian drug enforcement architecture is naturally seen apprehensively against the background, especially considering that Washington rejects on a wholesale basis the initiatives targeting drug production within Afghanistan. Russia floated a series of proposals at the aforementioned Vienna conference such as compiling an interactive real-time map of drug crops in Afghanistan to guide eradication raids, using satellite surveillance to detect drug trafficking, equipping border guard outposts with advanced technologies, etc., but neither of the ideas resonated with the US. As before, Washington opposes eradication on the pretext that it would leave Afghan farmers unable to fare for themselves, and, moreover, shuns Russia's initiative to subject to strict control the precursors to heroin and other complex opiates. Precursor codification could make it possible to track their origins and, eventually, to radically cap hard drug production, but it seems that this would not be the result to the US Administration's liking.

The inescapable conclusion stemming from the analysis of the US position vis-a-vis Afghanistan's drug problem, attempts to perpetuate in some form its military presence in the country, and efforts to make inroads into Central Asia is that the intensifying flow of drugs from Afghanistan to Russia and across it to Europe is regarded as an at least acceptable phenomenon in Washington.