Russia: The history of the Wild East 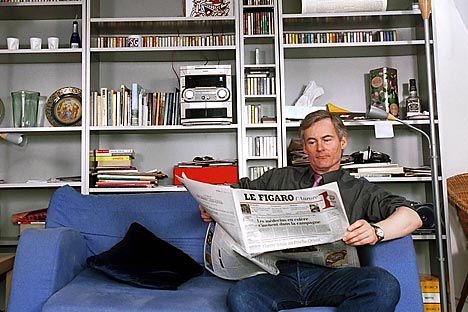 Veteran BBC journalist Martin Sixsmith, discusses his careers in Moscow and Washington, D.C., his temporary seat next to power in the U.K., and his tome on Russia.

Martin Sixsmith reported for many years for the BBC, witnessing key moments of history. Now he’s written a book based on his 2011 radio series: “Russia: A 1,000 Year Chronicle of the Wild East.” The U.K. paperback and the U.S. edition will both be published in March this year to coincide with Russian elections.

I met Sixsmith for coffee in January in one of London’s many Russian cafes. Surrounded by bowls of beetroot soup, blini and packets of buckwheat, we talked about his lifelong love affair with Russia and his experience of its “moments of unruly destiny.”

Sixsmith’s face is familiar to many people in the United Kingdom, especially those who are old enough to remember the Cold War. He was BBC Television’s Moscow Correspondent in August 1991 and recalls events there vividly. “I remember speeding through the streets and seeing columns of tanks descending the broad avenues towards the Kremlin,” he writes in the introduction to his book. He describes that time as “the apotheosis of my journalistic career.” The aim of the book, and the radio series, was, he said, “to put my experiences of 1991 in a historical context.”

The lively result of this epic project has been a hit in Britain. Sixsmith is well known not only as a journalist, but also as a prominent press spokesman for Tony Blair’s government. His time in politics was overshadowed by controversy and he left under what he describes as “a government-manufactured cloud.” His revenge took the form of a satirical novel called “Spin.”

Among the many contemporary books about Russia, general readers are likely to choose Sixsmith’s 600-page tome for its comprehensiveness and air of authority. As popular history, it is enjoyable and engaging. Some expert critics have a few caveats; Mary Dejevsky, reviewing it in the Independent, complained of Sixsmith’s “penchant for sweeping generalization” and rehearsal of “big, but well-worn, ideas” like Russia’s dual nature, torn between Europe and Asia, or the autocratic rule “that so often seems to define power there.”

It is precisely these recurring patterns in Russian history that Sixsmith finds so fascinating. The premise of his account was that “the cycle we saw culminating in 1991 has actually happened before. There is the polarity that Russians themselves identify between attachment to the East and attachment to the West. East and West both become a matrix of symbols for a way of life, a government, a model of the state. Russia has hesitated between these two over the last thousand years.”

Along the way, some of Russia’s more peaceful rulers get slightly short shrift. Sixsmith acknowledged that “we do rush through the early history and give a lot of time to the twentieth century,” explaining the radio bias towards years when sound recordings were available and that “the BBC specified that the first series should cover the ground up to 1917 and the second series should cover the period from 1917 up to the present day.” This produces a momentum that keeps the book accessible.

Sixsmith uses a quotation in his preface that refers to the force of Russia’s orbit. “Russia has that effect. A lifetime studying, working in and writing about the great planet has dragged me into her orbit.”

Sixsmith fondly remembers learning Russian at Manchester Grammar School in the late 1960s, the era of Sputnik and Gagarin, “when the Soviet Union was a very big presence in Britain.” He went on to study Russian and French at Oxford and Harvard universities.

Sixsmith developed a great knack for being in the right place at the right time. He was posted to Washington for the election of President Bill Clinton. “When the BBC told me that my next posting would be Washington D.C.,” he recalled, “my children excitedly told all their friends that we were ‘moving to Disneyworld.’ For the first few months in my new posting, I felt they might have been right. I covered stories that included the O.J. Simpson murder case, the accusations of child molestation against Michael Jackson, the rape trials of Mike Tyson and William Kennedy Smith. After the high octane drama of political upheaval, coups and epochal change in Russia, the diet of show biz and celebrity crime in the U.S. seemed unreal.”

“But there were real stories, too,” he continued. “Travelling with Clinton and Gore was a tremendous experience. Their style was open and easy. On November, 3, 1992, I was in Little Rock to see the new president declare victory and celebrate by dancing to Fleetwood Mac on the steps of the Governor’s Mansion… Later I followed another candidate on the campaign trail. In 1994, George W. Bush was bidding to become the Governor of Texas... But one remark he made remained in my memory. When I asked him about his father’s decision to halt the U.S. forces advancing on Baghdad without seizing the city or toppling Iraq’s dictator, Bush Jr. paused and said slowly, ‘Iraq. There’s unfinished business there, my friend.’ In March 2003, when the new president announced the second invasion of Iraq, his remark came back to me with a jolt.”

Sixsmith compares Yeltsin’s rule to Tony Blair’s government in Britain, a period that began with idealism and good intentions, but “went wrong quite quickly.” He has a certain respect for Prime Minister Vladimir Putin’s ability to bring order to chaotic, turn-of-the-millennium Russia: “If I were a Russian and I was given the option of living in the 1990s - when my pension wasn’t being paid, the heating wasn’t working and my son was being sent to fight in a war from which he was very likely to come home in a body bag - or 2012 when the economy broadly is working, you don’t get shot in the street, but you do have to surrender a certain amount of freedom of expression, I’d probably go for the latter.”

In typical BBC fashion, Sixsmith sees both sides, admitting that “in order to restore order, some personal liberties were lost; certainly the press is not as free as it was under Yeltsin; what happened in Chechnya was quite brutal,” and – citing the Khodorkovsky case – observes that “politics and the economy are not entirely disentangled.”

His feeling about the recent protests is that they are “probably a blip. Putin will be re-elected in March. The opposition is really not very strong in Russia. It’s a small proportion of the overall population and not representative; it’s the intelligentsia, it’s in the cities, and if you go into the regions, you don’t have that sort of support for it.”

Sixsmith hopes to see peace and prosperity in Russia: “I would also like to see a greater amount of open debate. I’d like to see an end to the intimidation of journalists. But if the price of liberal, western style, parliamentary democracy were disintegration, murders, violence and suffering for a large swathe of the population, I wouldn’t want to see that. Not “democracy at all costs”.” Ultimately, he says, with decades of love and fascination for the country in his tone, “I’d like to see Russia thrive.”

“Russia: A 1,000 Year Chronicle of the Wild East” is published by Overlook Press.