The US stirs up trouble for Russia in India 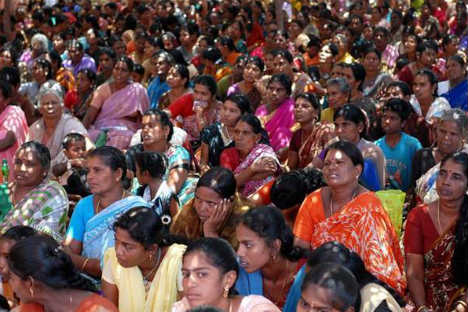 American and Scandinavian NGOs have masterminded protests against the Kudankulam nuclear power plant, claimed India’s Prime Minister Manmohan Singh. An inquiry into their actions showed that these organisations had been financing manifestations of the peaceful atom’s opponents, transferring money in the guise of aid for the sick. The demonstrations have put launch of the power plant built jointly with Russia on indefinite hold.

The campaign waged against the Kudankulam nuclear power plant constructed in collaboration with Russia is sponsored by American and Scandinavian non-governmental organisations (NGOs). This conclusion can be derived from an interview with Manmohan Singh, head of India’s government, in the United States’ Science Magazine.

“The atomic energy programme has got into difficulties because these NGOs, mostly based in the United States, don’t appreciate our country’s need to increase its energy supply. NGO-led protests have stalled commissioning of two 1000-megawatt nuclear reactors”, said the Prime Minister. Last December, India’s Internal Affairs Ministry launched an investigation into the actions of non-governmental organisations that had been set up in two cities of Tamil Nadu state. According to statements by the Prime Minister’s office, the inquiry found that these NGOs had been sponsored by the United States and Scandinavian countries.

The demonstrations held in September 2011 deferred the commissioning of the nuclear power plant for two months. During subsequent protests, the roadway to the plant was blocked, so engineers and scientists were unable to access the premises.

The government official said NGOs had received foreign funds for implementing social projects “such as providing aid to the disabled or getting rid of leprosy. But they were used to organise anti-nuclear protests instead”.

Russian Ambassador Alexander Kadakin backed PM Manmohan Singh’s remarks, stating that the Russian side had also been suspicious of foreign involvement in the plant’s construction. The observed situation, naturally, gave rise to a variety of questions. India Times quoted Russia’s envoy as saying “Six months after the Fukushima tragedy, all those protesters raise their voices. They were sleeping for six months and then, all of a sudden, they raise their voices against the most secure, the best and the safest (nuclear power) station in the world”.

Three NGOs had their licences revoked by the authorities, while the actions of another group are the subject of an ongoing investigation. In his interview with Nezavisimaya Gazeta, Sergei Lunev, professor at MGIMO University, claimed Russian nuclear power plant constructors had a bright future despite the recent events. “The only real competition to Russia is France. The Americans claimed they were going to build a nuclear power plant but they haven’t done anything of the sort for 35 years. India is expressing great interest in atomic energy. It has no alternative. Coal power plants harm the environment, so the country has put forward a plan to spend almost US $100 billion on nuclear energy by 2030 in order increase capacity ten-fold. India is the more interested party in collaboration with Russia, so it is the host country that should deal with the demonstrations. And that is no easy matter”.

Another nuclear plant construction site was established in the state of West Bengal, where the project’s opponents started recruiting Naxalites, insurgents who support the Maoist-based liberation movement in rural areas. These militants threatened to carry out terrorist attacks against the nuclear power plant.

It should also be remembered that ROSATOM lacks sufficient capacity and specialists to meet all the work requests it has received both abroad and in Russia.

When asked to comment on whether the NGOs were acting independently, Mr Lunev asserted they were “linked to the US government. Americans are not short-sighted; they have a long-term perspective in mind. Events that accompanied the sale of Russian cryogenic engines for Indian missiles twenty years ago serve as an example of this attitude. The United States talked Russia’s President Boris Yeltsin into dropping the deal and, within a fortnight, made their own proposal to the Indians. Nothing personal. Just business. Strangely enough, the Indians still blame the collapse of the deal on Moscow, not Washington”.