Cars instead of sausage 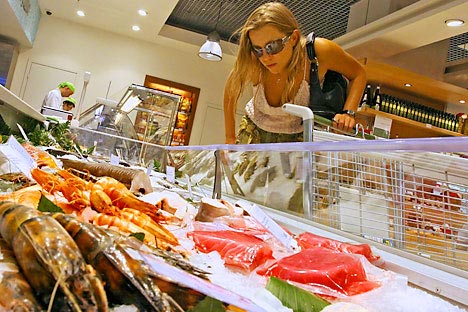 Statistics show that since the Soviet Union's collapse, Russians’ standard of living has changed significantly. Russians have been making more money and spending more on vacations; cars have turned from an impossible luxury into an affordable reality, and housing footage per capita has risen by almost a third. However, the progress has slowed somewhat in the last few years, according to the Federal State Statistics Service (Rosstat). Consumer confidence has not yet been rebuilt after the crisis, and the number of Russians living below the poverty line increased again in 2011.

Before the crisis, Russian consumption compared quite decently to other countries, Rosstat head Alexander Surinov told reporters on Tuesday. In 2008, one Russian household spent an average of $13,136 annually, which was comparable to Croatia and Latvia, while still remaining way behind the United States and Germany, where an average household spends about $36,000 and $25,000 per year, respectively.

But it is much more interesting to compare present-day Russia with the Russia of twenty years ago. In order to understand how living standards have changed since then, the Statistics Service compared the spending patterns of consumers in 1990 and 2010. As is known, the richer the person, the smaller the share of expenditures on essentials (foods, clothes, etc.) and the larger the proportion of spending on intangible assets. Based upon this assumption, the lives of Russians have indeed improved. Immediately after the disintegration of the Soviet Union, the average Russian spent almost half of his income on food, which compares to only 30% in 2010. The share of expenditures on alcohol also fell (to 1.7% from 2.5%), as did the proportion of spending on clothes and footwear (to 11% from 14.5%). At the same time, the share of spending on services almost doubled to 27% from 14%. An unpleasant effect of the new economy is the growing cost of housing and utilities, which now account for 9% of total spending, up from 4%. At the same time, the last two decades saw an increase in the number of durable goods in households, which is an important welfare indicator – in the 2000s, the number of proud computer  and cell phone owners soared. Technically, this indicator could be excluded, though, because technological advancements resulted in the appearance of all new products that people naturally could not have had twenty years ago. Yet, the growing number of cars is a reliable welfare indicator. Back in 1995, there were 18 automobiles per 100 households, whereas in 2010, the figure reached 48 vehicles. The housing situation has also improved to 22.6 square meters per capita currently, up from 16.4 square meters in the 1990s.

However, the folk wisdom that “money can’t buy happiness” is also true in sociology. One of the indicators that sociologists use to calculate the standard of living is the distribution of a citizen's daily work time. It is believed that the more free time a worker has, the higher their standard of living. Based on this logic, the lives of Russian citizens, both male and female, have not changed much over the past 20 years. The average male currently works a bit less than his counterpart did in 1990 – an estimated 30% of daily time is spent on job duties now (i.e. 7 hours and 10 minutes), compared to almost 32% (about 7 hours and 40 minutes) 20 years ago. Females saw their working hours decrease more significantly – to 25.4% of daily time (about 6 hours) currently, from 29% (about 7 hours) in 1990. Housekeeping, too, takes up less time now. Males now spend 9.7% of daily time on housework, down from 10.6%, and for females, the figure went down to 17% from 22%. At the same time, “personal care” time (which includes, among other things, shaving for men and applying make up for women) has increased – both females and males spend 44% of the time on care, up from 40% two decades ago. The situation with free time has changed differently for males and females, though: the former reported a reduction in free time to 15.6% of daily time versus 17%, while the latter saw an increase to 12% from 9.5%.

However, it's not all as rosy as it might seem. The consumer confidence index, which is used to estimate citizens’ expectations, has not recovered since the 2008 recession. In 2011, it remained in negative territory, at about minus 7%, which means there were more pessimists than optimists. For comparison, in Sweden, the most confident country, the index stood at 2.8%, and in Greece, the least confident country, at minus 70%. The number of people living below the poverty line in Russia has naturally fallen since 1992, when 33.5% of Russians had incomes below the minimum subsistence level. The year that has since then had the smallest number of the poor is 2010, with 12.6%. But in 2011, the number of the poor increased again, reaching 12.8%.