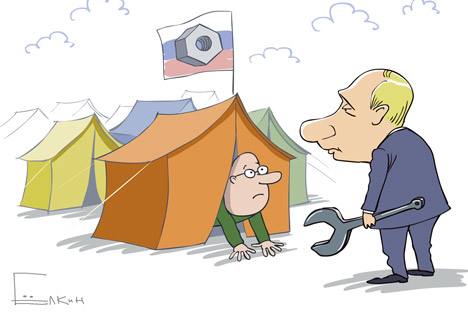 As Russia’s presidential election draws ever closer, public opinion about the country’s political future are becoming more and more diverse.

Russia Beyond the Headlines asked the experts and representatives of different political forces if Russia will see an escalation of protests, a "tightening of the screws" or even some other options.

The fact the opposition rally is scheduled on Monday after Election Day means that the authorities are hardly likely to take tough measures to prevent it. At least they have already started the dialogue with people and are ready to make concessions. Although it doesn’t significantly change the whole political situation, this may be seen as good sign.

Gregory Fiefer, a former correspondent for Radio Liberty, writer and a specialist in U.S.-Russian relations

Honestly I can't predict events after the election - anything could happen, although I doubt there will be an Arab Spring-style revolt and I certainly don't believe there will be civil war. Protesters against Putin have made simple, unassailable demands for gradual change that could chip away at the closed nature of his rule by opening politics to competition. The likeliest scenario is an ongoing struggle over the country's future. Putin's recent actions have undermined his crucial image as a strong leader, a key ingredient of the traditional political culture he restored in Russia. But his authoritarian powers will be supported by a group of loyal cronies at the heart of the political-economic system and reinforced by powerful security services and a culture of pervasive corruption that gives vast cadres of bureaucrats and many private citizens a stake in the system – and would require sweeping changes in society's behavior. Much will come down to whether the political and business elite will come to believe its security would be better protected under a new leader – and how far Putin is willing to go to remain in power. He indicated in an interview published today (March 2) he may want to run again in 2018.

Vladimir Kashin, deputy chairman of the Communist Party of the Russian Federation

The problem is very serious, but hopefully it will not result in a civil confrontation. A lot will depend on the vote day: [it remains to be seen] whether the falsifications will be revealed and the carousel practice and ballot stuffing will take place [again]. The situation is very complicated and, unfortunately, the authorities don’t understand that only honest elections and the legitimate power are the only way to deal with the public unrest. They plan to orchestrate the falsifications during the elections, and don’t understand that it may bring about unpredictable consequences like it was during the 1990s. Yet I think that there are many officials who do understand that they may face criminal charges for the misconduct and try to observe the orders of the authorities.

It’s necessary to stop the lawlessness to prevent the events that might shake the country again. We need the legitimate power that will be recognized not only in the country, but in the world.

A civil war results not from elections, but from the inadequate reaction of the authorities. And our authorities have demonstrated their inability to respond adequately to the public indignation and the demonstrations. Any political scenario is possible in these circumstances because most of the people don’t want to live among lies, unfulfilled promises and state-controlled television.  It depends on the authorities’ action whether we’ll see a confrontation in the society.

All revolutions are orchestrated by the authorities. And Vladimir Putin is the biggest revolutionist in Russia. He may provoke revolution if he doesn’t start the dialogue with people.

Given the discriminatory attitude to the presidential candidate from the Yabloko party, the elections may result in public unrest. Although the authorities heard the people but they don’t fulfill their demands. This may bring about new demonstrations, but not the revolution – people don’t want to experience another political upheaval. I am afraid the authorities may provoke the public unrest to find a good reason to oppress the opposition like it was in Belorussia.

Valentina Matvienko,  Chairperson of the Federation Council, in an interview with Kommersant.ru

We witnessed the political upheavals in history when the radicals wanted the country to be shaken. It’s necessary to talk about it to be prudent and cautious. The authorities and law-enforcement agencies should take all measures to prevent the violation of the law and violence.

Today the authorities don’t prevent people from taking to the streets and expressing their point of view. Moreover, the president met with the opposition, he listened to them and took into account their proposals.  And as you see everything was conducted with the decency. The TV channels broadcast the rallies and gave people an opportunity to be heard.

This is the civilized democracy, and we should encourage it. But if the meetings are provocative in the beginning, the authorities should act in accordance with the law.