How long will the Kudankulam deadlock last? 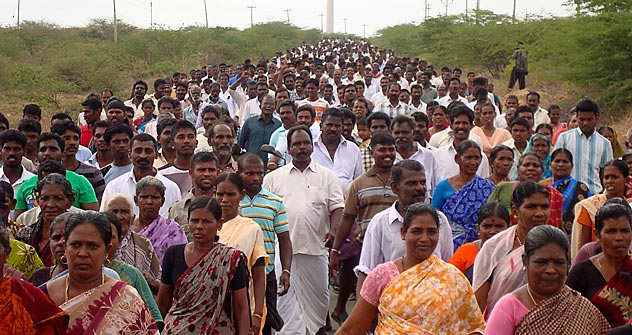 The ongoing deadlock at the Kudankulam Nuclear Power Plant (KNPP) in Tamil Nadu, triggered by months-old protests, have raised question marks over the course of the ambitious roadmap for expanding India-Russia nuclear cooperation.

The protests against the Russia-built Kudankulam Nuclear Power Plant (KNPP) in Tamil Nadu entered its 200th day March 2, and are not going to end anytime soon. The mass agitation spearheaded by the People's Movement Against Nuclear Energy (PMANE) is opposing the two 1,000 MW reactors being built by India's nuclear power plant operator Nuclear Power Corporation of India Ltd (NPCIL) in collaboration with Russia in Kudankulam in Tirunelveli district, around 650 km from Chennai. The protests began Aug 16 at Idinthakarai village.

If the stalemate is not resolved immediately by the authorities, it may ultimately hit the “roadmap” for expanding civil nuclear cooperation between India and Russia. The roadmap, which envisages scaling up of nuclear energy production in India from 4,780 MW to 63,000 MW by 2032, was approved during the visit of Russian Prime Minister Vladimir Putin to New Delhi in March 2010. The plan includes Russia building around 16 to 20 reactors for India in the next few years.

The KNPP has run into rough weather due to stiff resistance from local residents who launched protests in the wake of safety anxieties sparked by the tsunami disaster in Fukushima, Japan, in March last year.

The ongoing Kudankulam deadlock figured in summit talks between India’s Prime Minister Manmohan Singh and Russian President Dmitry Medvedev in December, 20011. After the talks, Manmohan Singh declared at a joint press conference December 16 that India and Russia had resolved their differences over the KNPP. Clearing the air, Singh said that the first unit of the KNPP will be commissioned in a couple of weeks and the second unit in a period of six months.

“I am confident that in a couple of weeks, we should be able to go ahead with operationalizing Kudankulam 1, and Kudankulam 2 a period of six months thereafter,” he said, stressing that “temporary problems” due to the agitation over KNPP would be overcome soon.

But the two sides could not sign the agreement on the construction of units 3 and 4 as India sought some time to resolve the issue of local protests and address safety concerns. There was, however, an agreement over terms of Russian credit line for units 3 and 4. Singh also assured India was committed to implementing the 2010 nuclear “roadmap.”

Two and a half months later, there is hardly any improvement in the situation on the ground, with around 130 Russian nuclear scientists and engineers working on the Kudankulam project sitting idle for months together.

Upset over the prolonged delay in the commissioning of the KNPP, Russia has said it should “start working now” and there should be a “movement” to start the plant.

“The machines have to start working now because after several weeks, you will have to spend much more time and money to maintain them. You will pay for nothing. They will be idle but you have to pay for their maintenance,” Russian ambassador to India Alexander Kadakin said in Chennai on February 16.

“Our scientists are sitting idle since October 2011. They are scientists of the highest calibre and their services are needed back home and in countries like Slovakia,” Kadakin told reporters, indicating that Russia’s patience was running out.

Stressing that anti-KNPP protests were India's “internal matter,” Kadakin said: “We are not setting any deadline. I am in close touch with the Indian government but would not put pressure of any kind.  It is your internal problem. I hope the Central and state governments and other agencies sort it out."

But he expressed optimism over the future of the plant and referred to various initiatives taken by the Union and the state governments, including the Tamil Nadu government appointing an expert group to address the fears of local residents over the safety of the KNPP.

"We are not that pessimistic. We are optimistic," Kadakin said, stressing the KNPP was the safest in the world and the first two units of the plant were ready for commissioning.

“There is no need for any phobia. Fukushima is an ancient station, made on American design. I want to tell the people that the nuclear plants in Kudankulam are the safest in the world,” he said. The expertise of Russia in setting up nuclear power plants was recognised by the country's competitors, the US and France, he claimed.

A 15-member Experts Group set up by the Indian government has said in its report that the KNPP was totally safe. It held several rounds of talks with protesters but failed to make any progress in resolving the deadlock.

“Based on its extensive examination of the various issues, there should be no cause for concern about the safety of the KNPP,” the Experts Group convener A.E. Muthu Nayagam said in a statement.

“Based on the advanced design safety features, safe grade level and high elevation of location safety-related equipment,” there would be no significant adverse impact in the public domain even if there were to be any accident, Muthu Nayagam stressed.

The four-member Experts Committee, including former chairman of the Atomic Energy Commission, Dr M. R. Srinivasan, set up by the Tamil Nadu government earlier this month  has also virtually given a “clean chit” to the KNPP, saying it was well-equipped to withstand natural calamities, be it earthquake or tsunami.

The Experts Committee was constituted following the announcement by Tamil Nadu Chief Minister Jayalalithaa in the State Assembly on the government’s decision to form the panel to go into the safety system of the KNPP and “perceptions and apprehensions” of the local people. It would submit its report to the government at the earliest on the basis of which the state government would take steps, she said.

“From our inspection we have gathered that KNPP can withstand tsunami strikes as the plant is 20 feet above the sea level. The reactors, which are of third generation, would automatically shut down in case of any problem,” Committee convener S. Iniyan said on February 19 after his talks with the members of PMANE.

Iniyan told reporters that the committee members inspected the KNPP for more than three hours and reviewed the safety measures put in place to deal with any contingency.

He said the KNPP also has a passive heat removal system and high-power diesel generators to meet any situation, adding these safety measures had been certified by authorities concerned. “We undertook an inspection of the plant and understood the concerns of the local people through our talks with their representatives today. We will go back to Chennai and study the documents provided by the plant officials and submit our report to the State government,” he said.

The impasse over the Kudankulam project acquired a new twist when Prime Minister Manmohan Singh in an interview to the American Science magazine last month said the anti-KNPP movement was funded by NGOs based in the US and Scandinavian countries. S.P. Udayakumar, coordinator of PMANE, was, however, quick to send him a legal notice saying that the comments are defamatory.

Meanwhile, appealing to the Tamil Nadu government to cooperate with the Centre in ensuring the early commissioning of the KNPP, India’s Home Minister P. Chidambaram has warned that those acting against the nation's welfare and development with funding of foreign agencies would have to face stern action.

Welcoming the state government's decision to form its own expert panel, Chidambaram hoped that the report to be submitted by the state panel along with the two reports prepared by the Central experts panel would clear the doubts in the minds of protesters and lead to early commissioning of the nuclear power plant.

As things stand today, there is no easy way out. The anti-nuke PMANE leadership does not show any sign of relenting. They have been obstructing the Atomic Energy Regulatory Board (AERB) team to enter the KNPP site for carrying out mandatory inspection because of the anti-nuke group’s ban imposed on the movement of workers and material into the plant site.

PMANE leaders have also opposed the inclusion of Dr Srinivasan as a member in the Experts Committee, claiming he was a “well-known pro-nuclear person.” They asked the chief minister to replace Dr Srinivasan with another expert and expand the group with experts in geology, oceanography and hydrology.

However, the PMANE leadership has sensed the tactical shift in Jayalalithaa's stance. They have set up an experts group of its own, seeking a dialogue with the official experts’ panel formed by the state government. All eyes are now on how the Tamil Nadu chief minister tackles the protests in coming weeks and resolves the KNPP stalemate.