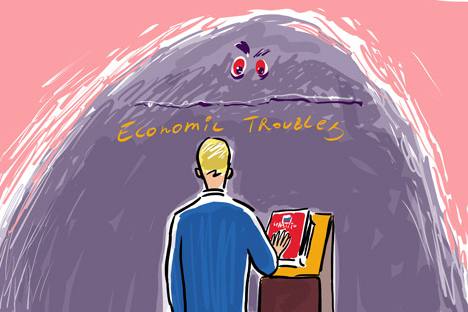 Economic prosperity has led to political activism in Russia, but the financial situation of many Russians remains precarious, and Putin may not be able to follow through on his promises to continue to make life better.

One of the jokes of Irish stand-up comedian Jason Byrne these days is that the “recession” is so bad that people complain: “I can't go on my third holiday!”

The joke would hardly fly in the run-up to Russia’s presidential elections on March 4. In 2009, Russia’s GDP dropped by a whopping 7.9 percent, the biggest fall of any country in the G20, but that aside, the economy has grown every year since the century began, so many Russians are more than happy with their lot.

Most Western and Russian analysts ascribe presidential candidate and Prime Minister Vladimir Putin’s genuine popularity among many Russians to the rising living standards and increased benefits they have experienced since 2000 and the turnaround in the country’s economy after the chaos of the 1990s. As a result, Putin looks virtually certain to win the presidential election, even if it does go to a second round.

But support for Putin is rather more subtle. Most economists rightly argue that the government has failed utterly to diversify the economy and that its economic policies largely consist of redistributing export revenues resulting from the good fortune of rising commodity prices since 2000.  The country has become more dependent on energy exports than ever, and huge pockets of deep poverty remain.

Ordinary Russians have a different take, however, agreeing with Napoleon’s dictum: "I don't want a good general, I want a lucky one.” They see Putin as a winner, in stark contrast to his hapless predecessors Boris Yeltsin and Mikhail Gorbachev, who were losers struggling with low oil prices.

It is, for instance, telling that while the protests in Greece largely reflect economic problems and to some extent the country’s traditional extreme politics, in Russia they are, at least so far, purely political, and began only after widespread accusations of electoral fraud at the parliamentary elections on Dec. 4, 2011. Most Russians remain blithely unaware of the risks to Russia’s economy from its undiversified economy, rampant bureaucracy and corruption, a possible European and global recession, heavy dependence on commodities and the transformational change in energy now underway globally due to shale oil and gas. Nor do they understand that Putin’s pre-election promises of budget largesse simply do not add up and are unsustainable.

Moreover, many buy into Putin’s campaign slogan of stability, little realizing that this is a non-starter meaning stagnation in a globalizing world.

But economic illiteracy and the desire for stability after the turbulent 1990s are not the only reasons many Russians will vote for Putin. To really understand his large support base, it has to be remembered that Russia’s current level of per capita GDP is of very recent coinage. In fact, until the 1990s, there was no such thing as a consumer society anywhere in the former Soviet Union.

It is hard to believe today, but while the privileged of the Soviet era may have had larger apartments and country houses than the rest of the population, even senior communist party officials lacked Western-standard cars, TVs, radios, refrigerators and washing machines. And even this class of people didn’t own their own homes; all property belonged to the state.

Additionally, the special shops for the elite may have offered more than what ordinary people had access to, but they did not offer anything like the range and choice of a normal Western supermarket. Ordinary household items were simply unavailable, forcing generations of Western diplomats, tourists and students to bring their own supplies of plugs, toilet paper and toothpaste.

So while ordinary North Americans and Western Europeans have had decades of experience with all manner of modern conveniences, modern Russians are the first generation who can enjoy the consumer society – a major reason for their ostentatious displays of consumerism.

But at the same time, they also realize all too well its “fragility” in the context of their country’s turbulent history and past. Maintaining the new lifestyle in the 2010s is expensive. Russians who pay a mortgage of a few thousand dollars a month are probably even more vulnerable to downswings in such a very narrowly-based economy than their counterparts in the West. And that is even truer in regions outside Moscow and St. Petersburg, which is where much of the country’s wealth is concentrated. This is just one more reason why the government is hell bent on stability.

It remains to be seen how Russia will develop after Sunday’s presidential election. As has occurred everywhere, rising living standards invariably lead to greater demands for political participation, and this process is now probably irreversible in Russia. On the other, whoever wins the election will have huge difficulties handing an economy with deep structural problems in an increasingly difficult and competitive global environment.