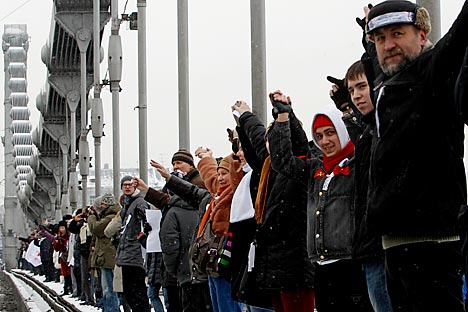 Several rallies are scheduled to be held today in central Moscow. Neither the authorities nor the opposition really understood what the protestors who have taken to the streets since Dec. 4 actually wanted.

The massive rallies that have rocked Russia since the Dec. 4 State Duma elections came as a surprise for all the country’s political forces. Both the authorities and the opposition were unprepared to see people take to the streets in numbers unseen since the early 1990s and neither group had a clear understanding of what the protestors wanted.

Arguably the group most surprised at the protests were the parties that were returning to the State Duma with more seats, even while claiming that the ruling United Russia party had engaged in vote fraud – the Communist Party, the Liberal-Democratic party and Just Russia. While these parties supported the protest actions, they found no love among the protestors, who weren’t interested in what they had to offer.

The people gathering in the streets were creating a new kind of opposition, which didn’t want to be associated with any established group. The protestors organized themselves on the Internet, through social networking platforms and raised around 4 million rubles to pay for the rallies themselves. Unlike Russia’s established opposition movements, these protestors engaged only in officially sanctioned actions, so the police would have no pretense to break up their rallies or arrest anyone.

Probably the most surprising element for the Kremlin was the fact that the protestors were the members of Russia’s middle class, who had benefited from the stabilization of the country and its economic growth under Vladimir Putin’s rule. Putin had trusted that this group would become his power base; instead, they were turning out in droves, telling him to go. In the past decade, the establishment had never received such a message from tens of thousands of people.

Skeptics immediately asked how the call for fair elections fit with the demand for Putin to go when all the opinion polls, including those conducted by independent pollsters, showed the prime minister winning the presidential election either in the first round or by a large margin in the second round. “I have no doubt that Putin will win. But he will listen and understand, ‘I am not ideal, not everyone likes me,’” said prominent artist Andrei Bilzho who took part in the Feb. 4 protest, explaining why the organizers of the rallies felt the need for them to continue.

Bilzho’s comments provide an apt description of the protestors’ goals. Because the protest movement had no clear leader, the movement, like Russian political life, focused on Vladimir Putin. The participants in the protest movement ranged from disenfranchised liberals to hardcore nationalists, so it is not surprising that they failed to coalesce around a single figure.  Additionally, the speakers most popular with the protesters were not professional politicians, but public figures who command moral authority and have impeccable reputations, such as author Boris Akunin and TV journalist Leonid Parfyonov.

Given this situation, many of those involved in the protest movement came to accept that the race towards political change would be more an endurance event than a sprint. Rather than waiting for the next presidential election in six years, many protestors are now hoping for a snap election, which could be a catalyst for the creation of new political parties much in the same way the fall of the Soviet Union allowed a new political culture to develop in the early 1990s.

When the protests began, many both in Russia and abroad tried to associate them with the actions of the Arab Spring, but in reality there are few similarities. Russia does not have a vast impoverished underclass with few opportunities for advancement. In fact, it is the economic opportunities of recent years that produced the middle class now advocating for change. The ruble is strong, the stock market is growing, and the continued high price of oil allows for government spending, at least for the moment.

Most fundamentally, unlike in the Middle East, the demands of the Russian civil activists are not about material well being. The people who turned up at the rallies in Moscow and other Russian cities want institutional change. “I think the main complaint the people present to the authorities is that they have no say in anything,” said music critic and active protestor Artem Troitsky.

Celebrated photographer Yury Kozyrev agreed: “If one compares our demonstrations with those in Egypt, there the manifestations of both joy and aggression were stronger. The people who joined the rallies in Moscow, were not the opposition. They had gathered to serve a reminder: we are human beings and we have the right to choose.”

The protestors’ demand for a choice proved to be a frustration both for the Kremlin and for the opposition. Kozyrev believes that, in the protests, “we witness the revival or the birth of a civil society.”

And in the long run, this may be harder for the authorities to cope with than economic demands.