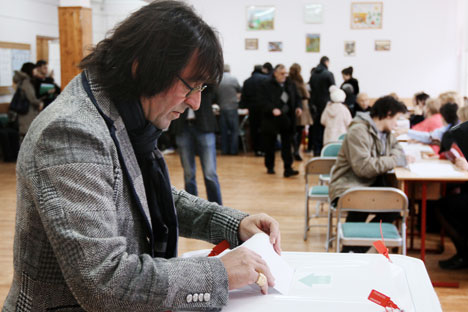 World renowned violist and conducter Yuri Bashmet voted yesterday during a presidential election that was viewed as predictable and historic – artists said Russia will never be quite the same. Source: RIA Novosti

Poets, painters, novelists, actors, producers, musicians, directors, teachers and scholars –Russia’s intelligentsia – have brought a lyrical voice to Russia’s opposition movement, helping to shape its direction and vision in recent months. Cultural figures like writers Boris Akunin and Ludmila Ulitskaya are at the forefront of change, while others are just now looking more closely at political life, beginning with casting their first votes in years.

RBTH spoke to about a dozen artists, asking them to describe the experience and atmosphere of voting on election day 2012. The questions focused not on the outcome – it was already clear that Prime Minister Vladimir Putin had won by the time many had answered yesterday – but their reflections on the process.

Vladimir Mirzoev is a Moscow-based theater and film director who voted for Mikhail Prokhorov. Mirzoev is known for the film “The Man Who Knew Everything,” based on the famous novel by Igor Sakhnovsky. “My family and I all voted for Prokhorov. Even though I understood from the very start that the elections would be rigged, the results unfair, I also believed it was important for a candidate such as Prokhorov, with the agenda that he has, to gather as many votes as possible,” the director said.

Leonid Katsva is a well-known historian and “honored teacher of Russia.” He said he also voted for Prokhorov, “as I think that power should be changed from time to time, and either variant of communists or nationalists at the helm of the country is unacceptable for me. Honestly, I don't have hope that these elections will bring some real change,” he said, “but I expect that they will help the society to organize itself. Society seems to be awakening and has started to take a true interest in politics.”

Sergei Shargunov, a political activist and writer, wrote the novel “Avian Flu.” The 32-year-old, a Debut Prize winner from 2001, said  “I just came and voted – expressing as much protest as I could. I noticed that attendance was very high, with a lot of elderly people.”

Shargunov states on his official biography that he was once blacklisted from the “Just Russia Party” for unflattering comments he made about Putin. “The society requests change,” he said after he cast his vote yesterday. “The street [protests] showed it, the parliamentary elections showed it. Of course, one shouldn't forget that many people don't go to vote only because they are sure they cannot change anything.”

Boris Akunin, who is best known for his detective thrillers, spoke to Radio Free Europe/Radio Liberty’s Russian service yesterday. He said when he arrived at his neighborhood polling station, “I crossed out the surnames of all the candidates and wrote ‘It's not a choice,’ and from my point of view, indeed there was no choice.”

Anna Potapova, a Moscow theater director, said she was still trying to understand “whether this election was fair or fraudulent. It’s scary anyway. The most scary thing is that there was no serious, alternative presidential candidate.”

No time for voting

Ironically, it seemed that some of the intelligentsia was too busy preparing for the vote and reporting on the elections to vote themselves.

Elena Fanailova’s collection of poetry in English, “The Russian Version,” won the “best Translated Book Award for Poetry,” in 2010. The stunning debut reveals a poet who makes the political personal, in the tradition of Marina Tvsetaeva and Anna Akhmatova. Yet Fanailova, like so many, has a second job. She is a radio reporter, and didn’t vote yesterday. She was on deadline, preparing for her radio show instead, she said.

Anna Starobinets, whose exquisite and harrowing collection of short stories, “The Awkward Age,” was translated into English last year, said,” I'm at the airport at the moment. I've had so many things to do today I didn't have time to go and vote. I cannot say anything about the level of the organization of these elections, but it is clear that their outcome is quite predictable. Whether they will bring any changes in the country or not will become clear only when we see what events will follow.”

Denis Matsuev is considered to be among the most virtuosic of pianists, and won the Tchaikovsky prize in 1998. Like his colleague, renowned conducter and Mariinsky Theater artistic director Valery Gergiev, Matsuev has shown his support for the incoming president, Vladimir Putin.

“First of all I care about the culture – it had been abandoned by our authorities for many years. Now we can realize our ideas and that's encouraging,” Matsuev said.

Matsuev voted in Shanghai where he is currently on tour, and was pleasantly surprised by all the Russians voting at the Russian Consulate. But he also wanted to talk about the more heated atmosphere of campaigning on the Internet and on TV.

“I absolutely don't understand the hysteria on the Internet related to the videos "Vote for Putin" featuring Alisa Freindlich and Chulpan Khamatova,” Matsuev said.

Khamatova is a thirty-something actress who is best-known outside Russia for her role in “Goodbye, Lenin!” Khamatova and Freindlich, a more established actress, appeared in a series of TV advertisements that answer the rhetorical question, “Why I am voting for Putin.”

Members of the opposition said some of the celebrities were blackmailed or strong-armed into appearing in the commercials. Many said that Khamatova had been told her Gift of Life charity would be shut down.

Matsuev said that he felt artists who support Putin are not pressured to do so. “People, hidden under [aliases], insulted these renowned ladies, while these ladies are moving our country forward. I consider it a bit unfair that all those negative things remain unpunished. As a Siberian, I would like to stand up for them, as I think that one has to be responsible for what one says. I always say that I'm independent, I have neither a theater, nor a symphonic orchestra, and nobody paid me for supporting Putin. This is my ground and I stand on it.”

Alexander Ilichevsky, a theoretical physicist, has become one of Russia’s most esteemed writers in recent years. While he has yet to have an entire work translated and published in English, he has won most every prize Russia has to offer and will attend the Read Russia book fair this June in New York.

“I came to the polling station very early and was the second or third of those who voted,” he said. “I saw from five up to seven observers who told me I should put both [ballots] for the presidential elections and for the city council elections in the same ballot box. I didn't notice any excesses.”

Ilichevsky said the only irritant was the presence of troops and army trucks in the city center.

“Apart from this, everything was rather new and interesting to me. Previously, I did not attend the elections, but I couldn’t possibly help but go today. I'm very happy with this surge of civil activity we are witnessing. Representatives of the so-called middle class start to pressure the power… Russia will never be the same and, in my opinion, it's very good.”