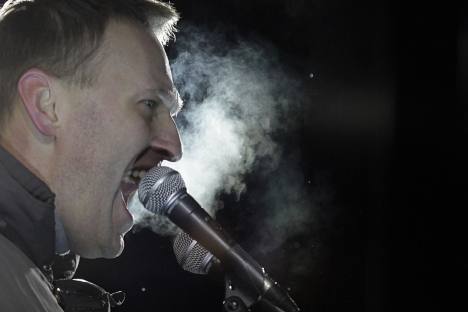 Alexei Navalny, an opposition activist, was taken into custody by Moscow police in central Moscow. Source:AP

Between 14,000 and 20,000, according to various estimates, came to downtown Pushkinskaya Square on late Monday for a sanctioned rally to protest Prime Minister Vladimir Putin’s overnight victory at the presidential polls, which protesters say were rigged.

The event was peaceful, but some 3,000 refused to leave the venue after the rally’s end, State Duma deputy Ilya Ponomaryov, a speaker at the rally, told Dozhd online television.

Ponomaryov said the follow-up event was formally a meeting with him, which means it required no police sanction. But riot police insisted the event was unsanctioned and told the protesters to disperse.

Officers eventually formed a human chain and moved to push protesters from the square. An amateur video from the site run by Dozhd showed officers march across the square and demand that the public leave the venue. It did not show them detaining anyone.

Several hundreds of protesters expelled from Pushkin Square staged an improvised rally, marching away from the Kremlin down the Tverskaya Street.