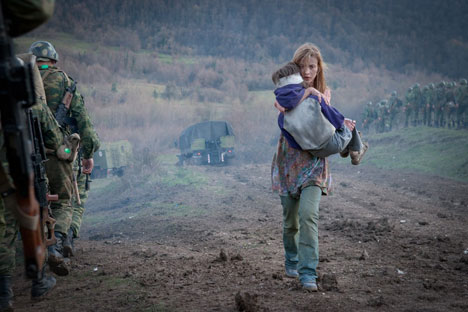 The footage from the "August 8th" movie. Source: Kinopoisk.ru

Another film attempts to tell the story of the five-day war between Russia and Georgia in the South Caucasus, but this one uses robots.

On its opening night in Russian theaters, the film “August 8” faced accusations of being propagandistic and political, but director Dzhanik Fayziev said that his film is about love and friendship. “August 8” is the third attempt to tell the story of the conflict between Georgia and South Ossetia that erupted in August 2008.

Before “August 8,” director Igor Voloshin filmed “Olympius Inferno.” Then there was the Georgian-American film “5 Days of August” by Renny Harlin.

Shooting films about war is not easy: there are the same events, facts, documents and participants, but the stories are often difficult to tell. While Fayziev based his film on a real story, he chose to give it a science-fiction twist, introducing fighting robots and mechanic dragons.

In the film, a naïve young woman named Ksenia, who has a five-year-old son, Tyoma, tries to balance her life between her soldier ex-husband and her new boyfriend, a banker. Ksenia’s ex-husband convinces her to send Tyoma to the Caucasus for a few days to spend time with him and his parents, but after Ksenia puts the boy on a plane to Vladikavkaz, she learns about the beginning of hostilities. She immediately drops everything and rushes into the hell of war to save her son. Ksenia is aided in her quest by the head of a reconnaissance team, Lekha. Meanwhile, Tyoma witnesses the deaths of his father and grandparents. He hides in the house and imagines himself in a world where good and bad robots are fighting in a war.

On Aug. 8, 2008, a conflict that has since become known as the Five-Day War or the Russo-Georgian war broke out in the breakaway Georgian region of South Ossetia. While debate continues over which side actually started the fighting, the conflict involved a large-scale military assault by Georgia on the territory of South Ossetia and the movement of Russian troops into both South Ossetia and Georgia proper. Through mediation by the French, who at that time held the presidency of the European Union, the parties reached a preliminary ceasefire agreement, signed by Georgia in Tbilisi on Aug. 15 and by Russia in Moscow on Aug. 16. After the conflict, Russia recognized the independence of South Ossetia and a second breakaway republic, Abkhazia. The situation in the region remains tense.

“As soon as we decided to introduce a science fiction theme into our film, I remembered my friends’ son, who was pretending to be an evil robot and beginning to live a life of his own when he disliked something,” Fayziev said. “Such behavior is natural for children. They try to hide from the real world and live in an imaginary one.”

“We made six computer-generated characters and in total there were about 700 scenes with the use of computer graphics,” Fayziev continued. “But still, our film focuses on the fate of simple people who found themselves in the thick of war. We tried to make our film as humane as possible. This film is not about politics. The war is a natural calamity that serves as a background for the main theme of the film – love and friendship. In the beginning of the journey, our heroine doesn’t understand what maternity is. Social fears and girls’ problems put pressure on her and the entire journey that Ksenia goes through is the path of consciously acquiring motherly instinct. Our film puts moral accents right.”

Military helicopters, tanks and APCs were used in the film and the director went to great lengths to make the part of the film about the actual war as accurate as possible. “We compared the information published in newspapers with eyewitnesses’ testimonies; we questioned over 2,000 people. Things that you see in this film are their 90 percent their stories,” Fayziev said.

The military consultants who worked on the time were the prototypes for the film’s main characters, including reconnaissance troop commander Aleksey Ukhvatov, tank crew member Yury Yakovlev, and their commander Colonel Yury Toldenko. The film crew also conferred with officials at the Ministry of Defense, in particular with Head of Joint Staff of the Armed Forces of Russia, Nikolay Makarov.

The film was shot on location in Abkhazia, North Ossetia and Moscow and cost $16 million, mostly on CGI and other special effects. Major specialists in the field, including editor Dennis Virkler ("Batman Forever," "The Wolfman"), sound director Bob Bimmer ("Speed," "Gladiator") and animator Alexander Dorogov, were invited to work on the film. The project was mostly financed by the Cinema Fund as part of its initiative to fund “socially important projects.”

“Many people now say that soon computer technologies will overshadow people in the frame,” said Maksim Matveev, one of the actors in the film. “But human emotions can’t be substituted, and use of graphics merely helps raise the emotional state of the audience to the level that director is aiming for. To my mind, Dzhanik Fayziev in his new film has completely justified the appearance of computer characters. There is not a single accidental detail in the film, everything is reasonable.”