Russian comedy at its best: “KVN” 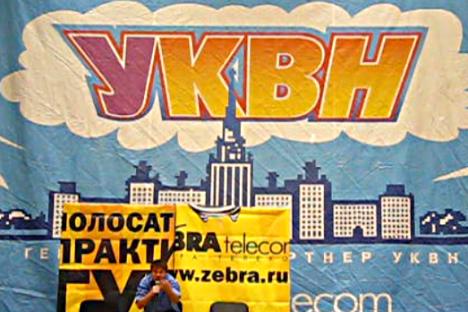 I’ve always considered myself a funny guy. When I first arrived in Russia, however, I was completely at a loss trying to understand their humor. Almost suddenly, I wasn’t as funny as I used to be back in the U.S. I couldn’t simply role out a joke referencing George Bush or the tree-hugging environmentalist SUV owners. The “that’s what she said!” jokes seemed to have lost their meaning, and other seemingly amusing material found its way to offend many Russian citizens. I quickly learned that I needed to adapt if I wanted to get the ‘spotlight of laughter’ back on me, but how was I going to do that? That opportunity came in the unexpected form of “KVN”. 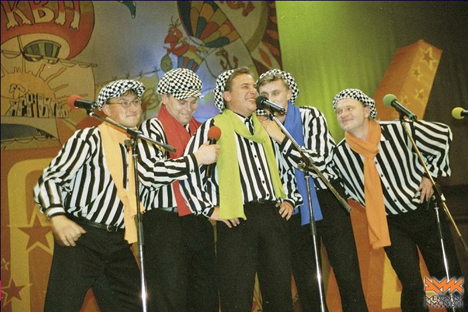 KVN, or “КВН” in Cyrillic, stands for “Клуб Весёлых и Находчивых” (Club of the Funny and Inventive). In late October, I was approached by a Russian friend, who asked me if I was interested in playing with him and two of his friends in ‘a comedy game show.’ Long story short, this is how I found myself accepting to play in the Moscow State University KVN tournament. At that point I began to research what KVN exactly is.

During my research I uncovered that KVN originated in Soviet Russia during the 1960s. Since then KVN has became one of Russia’s most popular competitions and longest running TV shows. There are many leagues, both on and off the air, with different teams competing in various parts of the world. From businesses to schools, from clubs to professional leagues: everyone in Russia seems to enjoy KVN! Although the game was banned for some years in the USSR for political reasons, its resurgence during Perestroika brought it to a level of popularity never experienced before. Currently, KVN has about five million spectators annually (an impressive feat, if you think about it!) and has become a cultural phenomenon that is present in almost every corner of Russian society.

The gist of the game is as follows: a panel of judges determines a score for each team, combining performance scores from a variety of activities. Our particular tournament included team-created sketches, an impromptu skit using a given plot line, and a round of question answering. No matter how much a team has prepared for it, the game ensures that the people playing aren’t simply actors; the impromptu section puts the pressure on players to make a room full of people laugh, with no time to think about what to do.

Here is a video from one of our performances to give you an idea of what a KVN game looks like.

As you might have noticed, our team name is “American Boys” - playing off of the fact that I am an American. The video is in Russian, but even if it was in English, many foreigners wouldn’t be able to comprehend the jokes. Russian humor relies heavily on popular culture, social conventions and requires a deep knowledge of the Russian language, something that can be an obstacle for non-native speakers.

Inside, and outside of this competition, I have also realised how important black humor, word play and dry humor are to the Russian culture. It truly makes it something unique, not meant for everyone. Take the following joke, based on word play:

“Eggs” is a slang word for testicles in the Russian language. I am afraid not many people abroad would find such crude humor as hilarious as the Russians do.

I thought that the funniest and most unexpected moment of the show was when I went to answer one of the impromptu questions. I nervously walked up to the microphone to answer the judges’ question; one of them said that she had read in a magazine about a crab, which scientists discovered doing a specific type of dance along the beach. “Why did it dance like that?” she asked. I slowly answered, “I also read this article, and the crab danced differently.” I took a short pause and, before I could begin to dance wildly and say “He danced like this!”, the whole crowd burst into laughter. Why was this first part of my answer so funny? I’m still not entirely sure... Perhaps it was the fact that I answered the question in a completely irrelevant way, with a straight face, and implied the judge was wrong? Whatever the answer may be, this is the type of humor that thrives here in Russia.

Our team did win the first round of the tournament and will be playing again in late March, but I still am learning about the comedy side of the Russian culture day by day. The longer I’m here, the more I find myself in that ‘spotlight of laughter’ I love so much. Sometimes I may direct a room full of awkward stares toward me, but it’s all part of the learning process.

I encourage you to check out KVN - give it a Google or YouTube search. There is plenty of information in English out there, which may just get you interested! It’s unique, different, and definitely Russian! Even an American like myself enjoys this game show that seems to be so distant from the “Western world.” Despite my mediocre Russian, I find myself laughing more often than not!

Before ending this blogpost I’d like to share with you one more Russian joke, which is very popular with children:

“A little boy found a machine gun — Now the village population is none.”

Now you can see why it takes some time to adjust to Russia humor, right?