Why women make Russia a better place to live 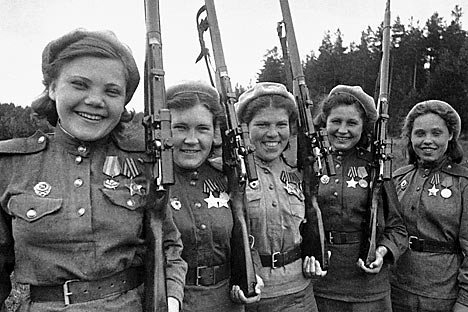 500,000 Soviet women served at the front from 1941-45 during the Great Patriotic War. Source: Vladimir Grebenev/RIA-Novosti

The position of women in Russian society is misperceived among many Western experts, just as it can be in Russia itself. The basic assumptions in the West are that Soviet women were oppressed, that reforms brought limited progress and that the country continues to be patriarchal. Yet this is far from the entire truth.

Even back in tsarist Russia, women possessed more inheritance and property rights than their peers in Europe. And after the Bolshevik Revolution, they received the same formal rights as men. In the Soviet Union, there was certainly a glass ceiling for career women — as in the West — and the average woman's salary was about 60 percent of a man's at the end of the Soviet period, roughly the same as in the United States. Moreover, women did double work at home and in the workplace.

Ninety-seven percent of Soviet women worked outside the home, and 500,000 Soviet women served at the front from 1941-45 during the Great Patriotic War. After the war, when the majority of able-bodied men had perished, women were left to rebuild the country.

A tribute to Russian women on International Women’s Day

The tragic developments of the 20th century seemed to damage men more than women in Russia. After the Revolution eliminated private property, men were stripped of the pride and responsibility associated with being the owner of the house and the provider for the family. The Civil War from 1918-22, mass purges and the Great Patriotic War hit men the hardest. Men became scarce and precious. Women were not confrontational toward them but understanding, endlessly patient, even sacrificial, with the longing for love — inherent in Russian culture and nature and enhanced by a heavy emphasis in grade schools and in families on classic Russian literature.

Feminism never was popular in Russia, yet women had to be independent almost by definition. U.S. columnist Trisha Flynn, who traveled to Russia in 1991, described Russian women as "independent and proud."

Their "independence" to some extent was assisted by state-sponsored child-support measures, although they were not always accessible and often substandard. These included free medicine and education, prenatal and pediatric care, specialized female health care, kindergartens and nursery schools, maternity leave, children's summer camps and vocational schools. They also included housing based on the number of children, although the waiting lines for apartments averaged almost 10 years and an open spot in a nursery school would often become available only when a child passed nursery-school age.

In the Soviet Union, more women than men had higher education. In high schools, girls generally received higher grades than boys. More women would go to theaters and exhibitions. Among doctors and teachers, the majority were women, and this still remains the case. In Soviet books and films, women were portrayed as daring and capable. There were no jokes about blondes in Russia. This came later, together with Hollywood films, from the United States.

The result of near-total female employment, however, was an increasingly low rate of child birth, an incredibly high number of abortions and an excessive workload for women. In the workplace, women moved rail cars by hand, laid railroad ties and carried bags of coal. And there were no Pampers, almost no baby food, no dishwashers or microwave ovens and few private cars. It is not all that surprising that progress in Russia for some had come to mean the liberation of women from excessive toil. Former Soviet leader Mikhail Gorbachev suggested in his first book published in the West that women should be given the chance to return to their homes.

In the economic chaos following the disintegration of the Soviet Union, women suffered most. Alongside some successful women in business and the newly re-established social group of well-off housewives supported by breadwinning husbands, there were masses of unemployed and low-salaried women, including doctors and teachers. Yet women proved to be more mobile than men in the transitional period, taking on odd jobs and, in many cases, being the primary providers for their families.

Though in the early 1990s there were some organizations that tried to help women, such as family-planning centers or shelters for victims of widespread domestic violence, for more than two decades since there has been little effort on behalf of the state to compensate for the existing gender misbalances and to create career ladders for women. The average woman's salary compared to a man's is hard to calculate in Russia, since many salaries are in the "gray zone" — not revealed by employers for tax evasion purposes, or not on the state radar in cases of self-employment. Yet the figures available seem to indicate that little progress has been achieved in this respect compared with the end of the Soviet era. Meanwhile, in the United States in the same period, women's salaries have grown from about 62 percent to about 80 percent of men's.

Despite the laws and international conventions on equal employment opportunities and equal payment that Russia has signed, a recent poll published by Vedomosti indicated that 83 percent of employers still prefer to hire a male as the marketing manager, and an even higher percentage prefer men as the financial director or CEO. There are few women in decision-making positions in Russia. It has few examples of Nancy Pelosi, Hillary Clinton, Catherine Ashton or Christine Lagarde, not to speak of Indira Gandhi, Margaret Thatcher, Benazir Bhutto, Angela Merkel and Argentina's Cristina Kirchner.

Despite the lack of feminist activism compared with the West, however, we are seeing some changes in Russia. Those nostalgic for Soviet times might see such developments in a more negative light, yet these changes do increase the space for individual freedom. Unregistered civil marriages have become widespread and are no longer scorned by society. Divorces have become socially acceptable, yet their number has remained stable. Giving birth out of wedlock, unlike in the 1970s, is no longer disapproved.

What's more, family planning has become much more common, especially among the young urban middle class, with contraceptives widely available. Women now have children later, especially in the larger cities, but with a hope to be able to better provide for them. Although patriarchal attitudes are still prevalent in villages and in some ethnic regions of Russia and daily chores remain largely in the female domain, there is a tendency among the young urban middle class for a more even distribution of household chores and responsibilities.

In the end, International Women's Day on March 8 seems somewhat artificial. Yet it is always nice to celebrate this holiday if only to celebrate the diversity of gender and the richness of life that women offer. The larger the role women play in politics, business and society as a whole, the more peaceful and harmonious the world will be.

Natalya Bubnova is co-author of the recent book "20 Years Without the Berlin Wall: A Breakthrough to Freedom."