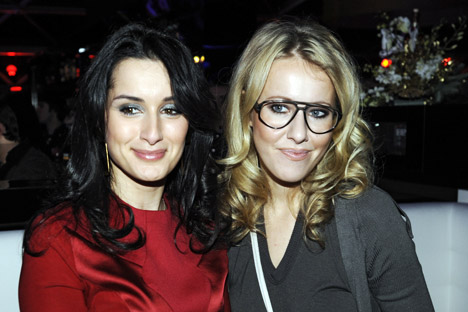 TV hosts Tina Kandelaki and Ksenia Sobchak are not regarded as businesswomen in the traditional sense – and yet their influence in Russian society is considered largely undeniable. Source: ITAR-TASS

On March 8, Russia celebrates International Women’s Day. In honor of the holiday, stories about the new role women are playing in Russian business. Long relegated to roles behind the scenes, today Russian women are becoming more visible.

In its short, 20-year history, business in Russia has been largely dominated by men. The chaotic transition years that gave birth to the country’s market economy in the 1990’s were ruled over by masculine tribal warfare, and the ensuing oligarch club which rules over the business world today is very much “men only.”

Even linguistics don’t present many opportunities for women in business, the term “businesswoman” not having followed its masculine counterpart when it made its language jump into Russian. Instead the feminine “-ka” ending is tacked onto the tail of the English “businessman,” to create a word that literally translates as “female businessman.”

But a recent list of the 100 most influential women in Russia, compiled by radio station Ekho Moskvy and several other major media organizations, suggests that women pull more strings in the country than they are generally given credit for.

Tucked away among the usual pile of pop-stars, socialites, and public activists are around 24 mostly little-known businesswomen, whose resumes are studded with top positions and major achievements.

“There is a Russian saying that behind any successful man there is a strong woman,” said Elena Panfilova, director-general of the Russian office of Transparency International, who herself came in 67th on the list. “The 24 businesswomen in this rating represent only those women who are visible, but behind the scenes, women are also playing a significant role because half of the chief lawyers and half of the senior accountants and financial directors in big businesses in Russia are women.”

The group is a varied bunch and come from a wide range of sectors, from the traditionally manly world of aviation, technology and oil and gas, to feminine sectors like media and retail. There is a fairly clear line between those mainly less-public figures who have attained their influential positions through years of conscientious hard work, and those who have been given a hand by an influential husband.

Two of the list’s most public businesswomen, Daria Zhukova and Polina Deripaska, were in relationships with some of the country’s richest men when they began their business ventures, which is not to say they do not deserve credit for their achievements.

Zhukova runs one of Moscow’s most popular modern art galleries, Garazh, while Polina Deripaska is credited with having pumped new life into Forward Media Group, the publishing house her husband gave her to run.

Less reputable, at least if media reports are anything to go by, is real estate tycoon Yelena Baturina, the wife of former Moscow mayor Yury Luzhkov and the world’s third richest woman, according to Forbes, who is being investigated for alleged involvement in embezzling millions of dollars of state funds in 2009.

A slow climb up the ladder

But perhaps surprisingly, given the nature of Russia’s business climate, a large number of the business types on the list are women who have worked their way up the through talent and hard work.

One of these is Natalia Kasperskaya, Russia’s second richest woman according to Forbes, who, together with her ex-husband Eugene Kaspersky, founded and ran Kaspersky Labs, a world-class IT security company. Kasperskaya, who stepped down as C.E.O. of the lab in 2007 to run her own company, InfoWatch, is often put forward as a notable example of Russia’s potential in the global technology industry.

Other businesswomen on the list have worked their way to high positions in major Russian companies, but have had little public presence and are rarely regarded as the face of the corporations that employ them.

For instance, Bella Zlatkis, the deputy director of Sberbank, is one of the founding figures of the Micex stock exchange and was a chief negotiator for the restructuring of Russia’s debt during the country’s 1998 default.

And Olga Dergunova, ranked 37 on the list, has twice made it to the Wall Street Journal’s list of most successful female European business leaders for her running of Microsoft Russia and current role on the management board of VTB bank.

A study on career opportunities for women in business conducted last year by the international audit firm PriceWaterhouseCoopers found that while Russian women are high achievers in the business world, they rarely reach top positions within their companies. The study found that some 91 percent of chief accountant positions were held by women, but only 6 percent of company president positions, showing that women perhaps have the right skills, but don’t generally aim for the top.

Panfilova, of Transparency International, says gender roles play a big part in perceptions of the types of roles women should play in the business world.

“Sometimes women just prefer to keep a lower profile,” Panfilova said. “We shouldn’t forget that most women are also mothers and simply don’t have the time to promote themselves. The time that men have to spend on self promotion and PR, women spend cooking dinner.”

But Natalia Orlova, a macroeconomist at Alfa Bank and a prominent female figure in Russia’s financial sector, says the issue may also be a product of Russia’s immature business environment.

“Russia has had a market economy for just 20 years — not long enough to establish their well protected legal wealth,” Orlova said. “Women in Russia generally try to do business following business rules rather than their personal connections. You could also draw the conclusion that they are less corrupt, but I probably wouldn’t say so directly.”

When it comes to management, men and women have different approaches. In business, women are more inclined to compromise, are willing to hear other parties’ opinions, and they are more concerned for loyalty rather than personal success.

Lately, I’ve noticed that a majority of large-scale, projects have been engineered by women. In our country, women are very effective in business — they are more organized, goal-oriented, and have the option of using native, feminine qualities to help them past several obstacles, such as women’s intuition and natural charisma.

When you work in a team with men, it’s important to mask your emotions, listen to their opinions, and compromise. Men see problems in a different way — they think globally, and therefore make any problem out to be much bigger than it really is. Meanwhile, women have a tendency to stick with details, so I appreciate the opportunity to hear the male perspective in every situation.

What is success? Some accomplishments, which may be considered successes to individual women, may be different from society’s expectations. One of these is earning your first million before you turn 25. But according to society, a woman should strive to be beautiful and smart. If she is wealthy, she is successful.