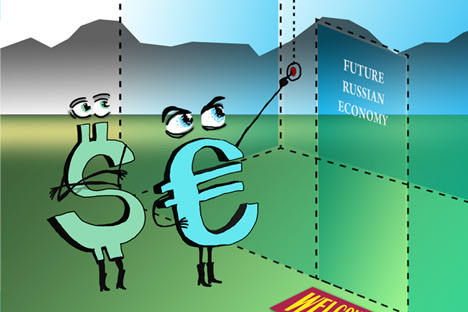 In order to follow through on its promises to the people, the Russian government needs to take a serious look at the country’s economy and make the changes necessary for sustainable long-term growth.

Over the last six months, the Russian government has been concentrating on winning elections – from United Russia maintaining its majority in the State Duma to Prime Minister Vladimir Putin returning to the presidency. Now, in order to justify its resounding mandate, the political establishment has to turn its attention to delivering sustainable and long-term economic growth for the Russian people.

Recent record levels of capital flight suggest that investors are not entirely convinced of the sound-ness of the government’s current economic strategy, which centers around expanding and diversifying the manufacturing base. It is time to accelerate Russia’s transition to a post-industrial economy in which high-value knowledge and service industries play a bigger role.

As a middle-income country with a large public sector to support, neither labor costs nor taxes are low in Russia. Although Chinese labor costs are rising, they are still a third of those in Russia, which gives the Chinese a massive advantage in the global marketplace for manufactured goods.

The government has attempted to erode the Chinese advantage by subsidizing industries and erecting high tariff barriers.  While this may be politically popular, it simply delays the necessary productivity and management reforms that would help Russian industry become more competitive.  It also keeps capital and labor tied up in unprofitable ventures, when it could be put to better use creating the profitable industries of tomorrow.

If the government wishes to base the country’s future economy on manufacturing, it is going to have to oversee a massive increase in productivity in a very short time.  The current policy of subsidy and trade protectionism actively works against that.

The Russian government in recent years has attempted to overcome its structural problems by using fiscal and monetary tools to stimulate domestic demand, a tactic it has in common with many developed countries. But this has only worked to boost inflation and increase reliance on imported goods.  It has not addressed the fundamental problem that labor in Russia is too expensive to produce low-quality, cheap goods, and has not yet been able to compete in higher-end manufacturing.

Some have called for a wholesale reindustrialization of the country so it can compete with China, much as it did during the Soviet era.  This would be theoretically possible with major macroeconomic and institutional reforms, including much greater levels of government intervention in the economy.

However, current rates of capital flight demonstrate that Russian investors are nervous about such prospects. Therefore they cannot be relied on to underwrite a major reindustrialization of the economy.

But this is not inherently discouraging. The real prize lies not in low-value high volume manufacturing – a market which has been pretty much been cornered by countries like China – but in a post-industrial economy based on higher value knowledge industries and services.

To achieve this, the Russian government needs to ensure that all sectors have an equal chance to thrive. This means policies such as a natural resources tax, the reduction of subsidy and trade protection for weaker sectors, and a reduction in regulatory and tax barriers to starting new businesses.  Other vital reforms include an acceleration of the privatization process, and a general deregulation of the economy.

Government also needs to ensure that investors can deploy their capital with certainty without fear of future arbitrary government confiscations or regulatory measures. This means that private property rights need to be taken seriously and upheld by the judiciary, without intervention from the executive. The legal system needs to be fair and transparent, and properly separated from the government so decisions are apolitical and consistent. These moves would go a long way towards reversing the corruption that has been holding back the economy.

Other areas of priority reform should be ensuring competitiveness and transparency for government investment and spending, and ensuring that monetary and fiscal policy is more consistent.

On top of this, the labor force needs to upgrade its skills to compete in the knowledge economy of the 21st century. Labor also needs to become more mobile, so people can move from areas of unemployment to take advantage of new opportunities.

If the policy mix is correct, there is no reason why Russian businesses and investors cannot modernize the economy themselves from the bottom up, with strategic help and investment from the government where appropriate.

The government has made a good start, for example by creating a new ‘Silicon Valley’ outside of Moscow and investing significant sums in modern transport and communications infrastructure. In 2012, it should build on these initiatives in order to continue the path towards modernization.

Alexei Moiseev is head of macroeconomic Analysis at VTB Capital.