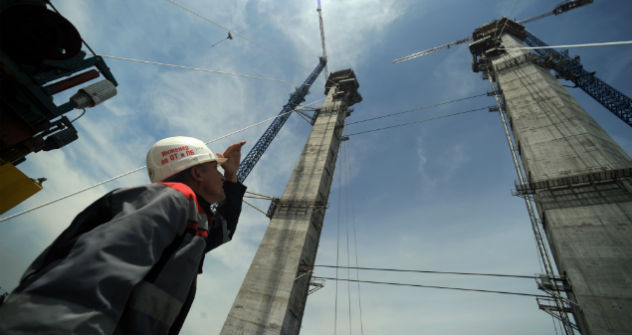 The constructions of a bridge in Vladivostock before the 2012 APEC summit. Source: ITAR-TASS

In preparation for its chairmanship of this year’s Asia-Pacific Economic Cooperation (APEC) summit, Russia is doing more than just building venues in Vladivostok. The top priority for government officials and businesses is to align the development of Siberia and the Far East with the dynamic life of the Asia-Pacific region as a whole.

This year, Russia will be chairing an Asia-Pacific Economic Cooperation summit for the first time ever. This prestigious forum, which unites 21 countries representing 40 percent of the global population and 54 percent of the world’s GDP, will be held in Vladivostok in early September 2012.

Part of the motivation for holding an APEC summit in Vladivostok – an idea that was floated by Vladimir Putin in 2007, was to turn Vladivostok into a modern city and gain a firm foothold in the dynamically developing Asia-Pacific Region.

As part of the preparations, a complex of buildings had to be built on Russky Island; these buildings will later be given to the local university. The island itself will be linked to the mainland by a giant bridge, while two more bridges will be built to link smaller islands with the airport. Additionally, new infrastructure will be built in Vladivostok itself. Russia will spend $22 billion on these projects, of which 40 percent will come from the budget, with the rest provided by businesses, although these are mostly state-owned companies.

“The Asia-Pacific region has become the engine of global development”

In hot seat: Russia firms up plans for 2012 APEC summit

But despite the huge investment and close attention of the country’s top officials, the project is significantly behind schedule. For example, the bridge to Russky Island was supposed to have been completed last year, but as of March 1 the construction was far from over; only 1,600 feet of bridge surface ready, out of the .7 miles.

Although completing the construction in Vladivostok is necessary, it is by no means the only condition for ensuring a fruitful APEC summit. “For all that talk about whether we need a bridge to Russky Island, or about who stole what, they forget the most important thing: this is our first time hosting the summit of an organization as important as APEC. This means we should be showing off not just our buildings and efficient organization but also the high level of the summit’s agenda and the initiatives put forward by our country,” said an official responsible for the preparation of the summit’s agenda.

As has become tradition, each country chairing an APEC meeting declares the priorities of its chairmanship in advance. Russia’s priorities were outlined by President Dmitry Medvedev at the APEC meeting in Hawaii in November. There are four of them. The first is the liberalization of trade and investment combined with regional economic integration. The second is the strengthening of food security. The third is the building of reliable transport and logistics chains. And finally, the fourth is cooperation to boost innovation. At the same time, Moscow’s main task is to align APEC’s priorities with Russia’s development goals, especially in Siberia and the Far East, according to officials responsible for the project.

Playing a key role in translating the general priorities into specific proposals is the APEC Business Advisory Council (ABAC). Formally, ABAC is an advisory body, but it is in the process of the council’s discussions that recommendations are made. A final list of recommendations are sent to the heads of state ahead of each summit in the form of a letter. Russia is represented in ABAC by VTB President Andrei Kostin, Basic Element head Oleg Deripaska and Summa Group Chairman Ziyavudin Magomedov, who is chairing ABAC this year.

The most resonant project promoted by ABAC is the idea of a technology transfer fund to engage in the exchange of key technologies, remove administrative barriers to their use, and protect intellectual property. According to Leila Mamedzade, executive director of ABAC and vice president of Summa, this would turn the fund into a civilized tool to be used in helping developing nations secure non-discriminatory access to technologies, while also encouraging developed nations to support weaker economies and even out regional imbalances.

But the West is not exactly happy about this idea, which could give Russia access to cutting-edge technologies. At APEC’s February meeting in Hong Kong, this initiative was criticized by the representatives of developed economies, especially the United States. However, the members of the Russian delegation still hope to win ABAC’s approval for the proposal, even if in modified form. Now Russia is suggesting the construction of a partnership platform to discuss the transfer of technologies in APEC countries, limiting the new center to a national level and a capital of about $10 billion.

Yet another initiative is to stimulate environmentally friendly urban construction. In Mamedzade’s opinion, this is a particularly pressing issue for Russia, especially its Far Eastern part. “Unlike the United States and many other countries, we have neither the required technical regulations nor the environmental standards. Most importantly, we lack tax incentives to encourage urban construction using the latest technologies. For example, in the United States, those buying an apartment in an eco-friendly building pay a lower real estate tax, and, while such housing is more expensive, this measure provides incentives for both developers and buyers," Mamedzade said.

Russia’s third ABAC initiative is to create a system for exchanging information on food prices within APEC, which would improve food security and make this market more transparent. According to Mamedzade, these measures could help Russia strengthen its position as one of the leading food exporters to Asian markets.

Finally, the initiative that is probably of most importance to Russia ahead of the summit, is a study of APEC countries’ best practices in the sphere of transportation. According to Magomedov, Russia has proposed creating a special working group to focus on infrastructure development. Moving some of the flow of goods between Europe and Asia to Russian territory would not only give Russia an opportunity to better link the Far East and Siberia with the European part of the country, but would also allow national companies to get up to $50 billion annually. However, these grandiose projects are impeded by the appalling state of Russia’s transport infrastructure.

According to the APEC Supply Chain study conducted by the University of Southern California’s Marshall School of Business, Russia ranks near the bottom of the list of the 21 APEC countries for all logistics indicators. It is ranked last for ease of foreign trade operations, and it ranks next to last in the overall assessment of logistics system performance, ahead of only Papua New Guinea. A study by the Hong Kong Logistics Studies Center provides a similar picture, criticising Russia for its bureaucracy and corruption, monopoly, multiple trade barriers, cumbersome customs services and complicated regulations, which all impede trade.

So, APEC cooperation could help Russia develop many advanced practices in every industry. It will also help Russia integrate into the Asia-Pacific region, which should become a driving force for the development of the Far East. This is the only way to transform this region from a depressed area into an economically thriving territory that will attract residents.