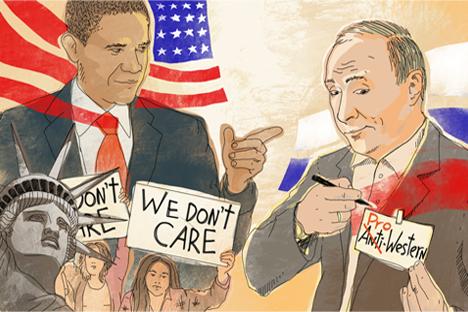 During Vladimir Putin’s first two presidential terms, Russia pursued a more aggressive foreign policy. Will it be more collaborative this time around?

Many analysts both in Russia and abroad believe that relations between Russia and the West will deteriorate under the third presidential term of Vladimir Putin. The day after Putin was re-elected, one-time Moscow correspondent Luke Harding, writing in British daily The Guardian, predicted: “In international relations, it [Russia] will continue to play a spoiling role, weighing up its own strategic interests against the frisson of annoying the Americans.” Harding combines these gloomy forecasts with a comparison of Putin’s rule to that of Leonid Brezhnev.

Left Front leader Sergei Udaltsov, however, holds the opposite view. “Putin is Russia’s most pro-Western politician,” Udaltsov said in an interview with Literaturnaya Gazeta. “He shut down the Soviet military bases in Cuba and Vietnam, he allowed Nato to expand to the territory of the former Soviet Union by admitting the Baltic republics in the early 2000s, and he keeps Russian budget money in American treasury bonds.”

Much to the chagrin of Russian nationalists, Udaltsov has the facts right. Putin’s other friendly moves include consenting to the deployment of American bases in Central Asia in 2001 and cooperation with the Western countries in combating the Taliban in Afghanistan.

But still there is the abiding sense that Russia’s foreign policy under Putin will be anti-Western. “It seems as if we have a situation in which the media is maintaining a myth it has created itself,” wrote Stanislav Belkovsky, a noted Russian journalist and political scientist, who considers himself a critic of Putin from what he calls the national-democratic position. “Putin is anything but a nationalist. Under him, Russia finally morphed from being a world power into a calm state that has only regional political ambitions, and even these are not aggressive. But the Western media have harped on it for so many years that people have subconsciously come to think of Putin as ‘aggressive.’”

Although outgoing President Dmitry Medvedev has often been considered more friendly towards the West, much of the credit for his main acheivements — the “reset” of relations with the United States and the signing of a new Strategic Arms Reduction treaty (New START) — really belongs to U.S. President Barack Obama, who led his administration to adopt policies indicating that the U.S. has stopped perceiving Russia as a threat.

Closer to home, however Putin managed to launch some important foreign policy initiatives even during his term as prime minister. One was the improvement in relations with Poland after 2010, when he visited the memorial to the Polish P.O.W.s who had been executed at Katyn.

“I am deeply convinced that the signs of improvement in Russian-Polish relations at the time were Putin’s personal project,” said Waclaw Radziwinowicz, Moscow correspondent for Polish newspaper Gazeta Wyborcza. “When Polish President Lech Kaczynski died in an air crash, it was Putin who began personally eliminating the consequences of the disaster.”

The tragic plane crash, which occurred on Russian soil, could have caused further deterioration in Russian-Polish relations, but instead the countries took the tragedy as an opportunity to make a fresh start. Putin began this process by visiting the crash site with Polish officials and then heading up the inquiry into the crash.

In general, this is Putin’s style: coming to the aid of a country that may or may not have been on good terms with Russia and thereby improving relations. Another example can be found in Russia’s response to the disaster at Japan’s Fukushima nuclear plant in March 2011. When it became clear that the loss of the nuclear power station would create a severe shortfall in Japan’s energy supplies, Putin proposed to compensate with increased deliveries of Russian liquified natural gas as well as coal.

Although his opinion piece on foreign policy published in the Russian daily Moskovskie Novosti in the days leading up to the presidential election took a harsh tone towards Russia’s international partners, the West in particular, Putin’s actions as prime minister indicate that Russia under Putin, in its latest incarnation, will not seek conflict, but will rather act strategically with partners ranging from the European Union and the United States to China and the Arab world.

“The current political situation is very complicated,” said Tatyana Parkhalina, an expert from the Moscow-based Center for European Security, “and it is in the interest of both Russia and the West to collaborate in fields ranging from the strategic partnership in Afghanistan to the Iranian nuclear program.”