Revealing details on one of the world's most freshwater sources 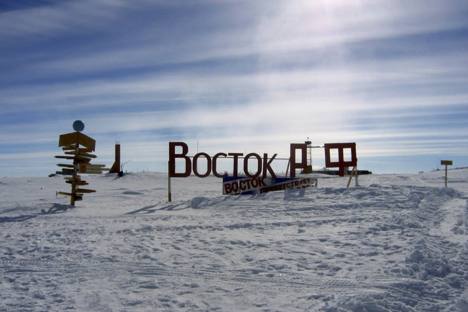 A general view of the Vostock research camp in Antarctica. Source: Reuters

Polar explorers from Russia’s Antarctic station describe how they extracted water samples from the sub-glacial lake.

Vostok Station stands on a huge lake that ranks fifth on list of fresh water reservoirs in the world. Its surface is concealed by about 13,000 feet of ice. But, most importantly, it has never been touched by anyone. For 23 years, first Soviet and now Russian, scientists tried to drill into to Lake Vostok. Alexander Frolov, the head of the Russian Federal Service for Hydrometeorology and Environmental Monitoring (Roshydromet), explained: “Contact with the lake is of exceptional interest to science. After all, it sheds light on the origins of the earth and life on earth.”

Read more: Russia drilled into lake at the South Pole

Generally, it isn’t allowed to fly to Vostok Station just for the sake of it. Russian expeditions either arrive to the Antarctic by sea, although this takes several months, or by plane from South Africa. There are only 10–12 of these special flights per year, and only during the three to four short months that the weather is good enough for the trip to be made

It takes five hours to get from the African heat to the polar cold. The airstrip at Novolazarevskaya Station, Russia’s gateway to the Antarctic, resembles a hostel or alpine campsite. There are huge tents, skis, backpacks, and flags upon flags from all over the world. Antarctic tourists constitute a club of a select few, like visitors to Mount Everest or space. It is the start and finish line of gutsy adventures. Some ride to the Pole on bicycle, and some run the Antarctic Marathon. Paul, an Englishman, paid a lot of money to get here and, judging from his burnt face and frostbitten lips, he has already gotten a taste of Antarctica.

“We reached the South Pole on skis. After all, this is the 100th anniversary of Amundsen and Scott first reaching it. It took us a month. Frankly, we were at our breaking point. But we made it. It was cool, a real adventure!”

Vostok is the coldest place on the entire continent, where extreme winds hold sway along with zero humidity and a lack of oxygen comparable to that at an altitude of 16,000 feet.

Russia does not have its own South Polar aircrafts. Within the continent, Russian polar explorers fly on Canadian airplanes, small Basler turbo-props. When the plane climbs to 16,000 feet, the pressure inside the cabin is the same as it is outside. Breathing is difficult––even in your sleep. Cheyne-Stokes syndrome sets in, which is when the body manages a deep breath with one out of every five. It’s important not to make any sudden, jerky movements. The crew recommends the passengers breathe oxygen “through a tube” but no one wants to be the first to show weakness.

The polar explorers who live at Vostok for months on end acclimatize; they say that within just a week, and a half their heads stop hurting, they stop vomiting, and the begin to be able to sleep. This is partially the reason there are only three permanent scientific bases deep in the Antarctic continent. At the South Pole, there are the American Amundsen-Scott base and the French-Italian base Concordia. And at the Pole of Cold, there’s  Russia’s Vostok. For nine months a year, it is cut off from the outside world––completely. And that’s no exaggeration: planes can’t make their way through the constant storms. Ships get stuck in the ice. At Vostok, there is no stop valve, no red button. No matter what happens, there will be no outside help.

At Vostok Station, there is no time to talk about polar romantics. After two or, at the most three, hours, the plane has to depart. If it gets colder than -56, the plane cannot take off, even in windless weather. Skis won’t work. At this temperature, the snow freezes into tough, sandpaper-like grit.

What is Vostok? A white desert. Several buildings, antennas, and a drilling rig. Fifty years ago, the station looked different, a small village that has now gone completely beneath the snow. To get inside requires descending into a narrow, frozen labyrinth. It’s a sort of avenue, dug under the snow. In the niches of this ice corridor there is a bookcase, a bust of a legendary polar explorer, and a potable water supply––cubes of snow the size of a soccer ball. There is nowhere to get liquid water.

The Russian researchers working with drilling apparatus at the Vostok camp in Antarctica. Source: Reuters

The Lake Vostok sensation itself is prosaic. It’s sort of an industrial plant. A cable creeps vertically from a huge coil somewhere under the floor. Inside it, an electric drill is lowering into a hole. The drill cuts into the ice and extends the borehole. And on the way back, it hoists up an ice core––a sample. The hole is filled with a mixture of kerosene and Freon.

French and American scientists who at one time worked on the project objected to this process, saying that it might cause foreign debris to enter the lake. Russian scientists countered that experiments performed at a test site in Greenland showed that there is no chance of contamination.

“The main thing is the difference in pressure,” said Nikolai Vasiliev of St. Petersburg State Mining University, who supervises the drilling process. “That is, what we have in the borehole is a little less than the pressure in the lake. Then there’s our mixture of kerosene and Freon––it’s lighter than water. That is to say, its density is lower than the density of water. And when the opening is made, the water goes into the hole. But not vice versa.”

Polar explorers talk about Lake Vostok with personal pride. It is about 200 million years old and around 4,000 feet deep. It has a pressure of 300 atmospheres. The concentration of oxygen is 50 times higher than in normal water. It is clear that no fish or prehistoric monsters exist there. But if any microorganisms are able to survive in such conditions, it means that there is an unknown form of life on earth.

“At first there was a lot of hope that we would at least find some signs of life in the ice we’re studying. So far, only thermophilic bacteria that survive at high temperatures have been found. Our biologists engaged in the research say that the water is very clean. In other words, there is not much hope of finding life in the lake’s water,” Vasiliev said.

Even if nothing is found in Lake Vostok’s waters, that, too, will be considered big news. It’s an enormous, sterile body of water––the only one on the planet. It is possible, therefore, to make an analogy: on other planets where ice predominates, there also may not be life.

When the lake was finally reached, a few cubic feet of the kerosene and freon mixture spilled out of the hole. The computer recorded a jump in pressure. The borer penetrated Lake Vostok at a level of 3,769 meters.

For Roshydromet head Alexander Frolov, this is a triumph. His agency has brought to its logical conclusion a project that lasted nearly 30 years. Moreover, it’s clearly envied by foreign colleagues:

“Nobody could drill to such depths. And no one could extract a core from such great depths. This means that Russian science is alive. It is competitive. If the Americans were the first to land on the moon, we were the first to drill into Lake Vostok at this depth.”

From the borehole, they took the first samples of water and the ice core. One half remains in the core library at the station, and the second will be taken to St. Petersburg, to the laboratory of the Arctic and Antarctic Research Institute. The deep – in all senses – study of the lake won’t begin for another 8–9 months. The weather drove the scientists away from Vostok. In another day or two, anyone who remains at the station will be spending the winter there. The hole full of big news has been sealed up until the next season.

Alexander Yevstigneev  is a special reporter for Russia’s First TV Channel. The article is first published in the Ogoniok magazine.