War on the nuke 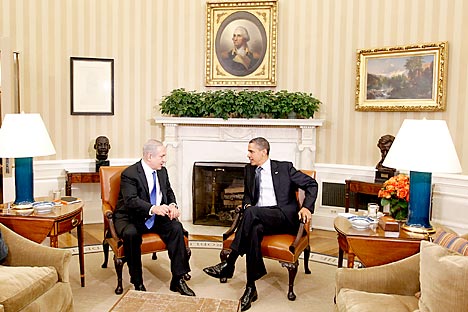 Talks between US President Barack Obama and Israeli Prime Minister Benjamin Netanyahu in Washington on 5th of March. Source: AP

“Israel has not yet decided on military action against Iran but it might resort to force”, Reuter reported, citing an unnamed source close to the talks between US President Barack Obama and Israeli Prime Minister Benjamin Netanyahu in Washington on 5th of March.

“We do believe there is still a window for a diplomatic resolution to this issue”, Obama stressed.  He said the US was commited to “preventing Iran from obtaining a nuclear weapon through diplomacy, sanctions and, as a last resort, force”.

It is not quite clear whether Tel Aviv is happy with the results of the negotiations.

Addressing the meeting of the powerful American Israel Public Affairs Committee, Netanyahu  said “We've waited for diplomacy to work. We've waited for sanctions to work. None of us can afford to wait much longer. As Prime Minister of Israel, I will never let my people live in the shadow of annihilation”.

Israel does not have a common border with Iran, the region’s heavyweight in military terms. But even a joint air strike would not suffice, as “planes can drop bombs but the nuclear capacity is hidden deep underground. This will not destroy all of Iran’s nuclear arsenal. As for land operations… they will fail, as to fight a war in Iran would be even more difficult than in Iraq”, Primakov argues.

One gets the impression that the US and Israel are playing the roles of good cop/bad cop, respectively, suggests Yuri Rogulev, Director of the Franklin Roosevelt Foundation at Moscow State University. “Washington has enough opportunities to put pressure on Israel’s Iran policy, and tough statements by Tel Aviv’s politicians are becoming an effective tool for mounting pressure on Tehran”, Rogulev added.

Washington obviously sees force against Iran as the last resort. “American officials who have assessed the likely Iranian responses to any attack by Israel on its nuclear programme believe that Iran would retaliate by launching missiles on Israel and terrorist-style attacks against United States civilian and military personnel overseas”, the New York Times reported.

Another factor is the potential threat against the Gulf’s oil industry.

Most important, however, is that Iran will certainly use the strike as a pretext to withdraw from the Treaty on the Non-Proliferation of Nuclear Weapons. “This will completely destroy the Treaty, which forms the cornerstone of Washington’s foreign policy”, warns Gennady Evstafyev, retired Lieutenant-General of Russia's Foreign Intelligence Service. Nuclear weapons like a Colt, ‘the great equaliser’, only on the international scale.

Apparently, it is largely for these reasons that Obama, while reiterating that he does not rule about any scenarios with respect to Iran, still hopes that the economic troubles caused by the economic sanctions might trigger social unrest, which would either sober up the Iranian leadership or topple it, as the Washington Post reported in January. And a new military campaign with an unclear outcome is the last thing Obama wants ahead of the presidential election.

Tehran does not need it, either, but anti-Iranian sentiment might come in handy. On 2 March, Iran held its parliamentary elections and a presidential election is due next year. Open pressure from the US and Israel is becoming an important factor bringing the voters together around the ruling elite, its inner contradictions being neutralised by a single position on the nuclear programme.

Moreover, by organising naval exercises in the Gulf or declaring its new uranium enrichment capabilities, Tehran seems to be provoking sharp responses from the West, which might be quite useful for Iran’s internal politics. The question is, however, how far this war of nerves can go within the US-Israel-Iran triangle.