A step towards compromise in Syria 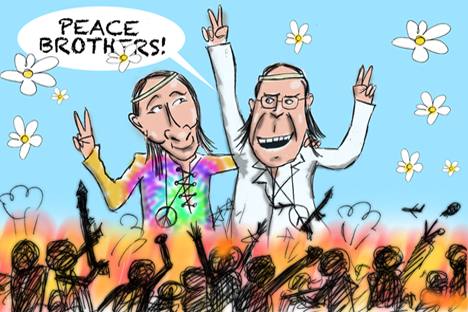 A new agreement brokered by Russia and the Arab League may pave the way for a breakthrough in the country.

The plan, according to Lavrov, envisions an end to violence whatever the source, free delivery of humanitarian aid to all Syrians, support for a mission to Syria by the special representative of UN Secretary General Kofi Annan – and the fundamental point that outside interference in Syrian affairs is inadmissible.

“We believe that these five points are of fundamental importance. They are addressed to all the sides in Syria,” Lavrov stressed.

The plan is almost exactly the same as the position taken by China’s foreign ministry published on March 4.

Qatar’s Prime Minister and Minister of Foreign Affairs Sheikh Hamad bin Jassim Al Thani told a press conference after a meeting with Lavrov: “We had a very useful and detailed conversation, as a result of which we reached an agreement on the general principles for settlement in Syria.”

He also said that all the parties to the conflict must immediately put an end to all violent actions. In addition, the Arab countries and Russia advocate the creation of a neutral and impartial mechanism for monitoring the situation in Syria. According to Sheikh Hamad, the parties have agreed that external military interference is unacceptable.

Judging from the published results of the Cairo meetings, there is a glimmer of hope that the Syrian impasse might be resolved.

It is notable that, first, the call to halt the violence is addressed both to Damascus and the opposition forces, although, until recently, all the blame for the bloodshed was put on Syrian President Bashar Assad. Now the responsibility for the casualties is shared.

Second, the international monitoring mechanism developed in the plan potentially makes it possible to determine the responsibility of each of the conflicting parties for continuation of the conflict and the growing toll of human lives.

Third, Russia seems to have made a concession in providing conditions for humanitarian aid, which may turn out to be a loophole for interference in Syria’s affairs. Even so, that position is counterbalanced by the thesis that foreign interference is inadmissible.

Finally, in its dealings with Syria, Russia relies on the authority of former UN Secretary General Kofi Annan who, in the early 1990s, stopped the slaughter in Rwanda, where more than a million people died in ethnic clashes. Judging from Lavrov’s statement after a meeting with Annan in Cairo, Russia considers his mediation mission in Syria to be pivotal and “hopes it will lead to the beginning of a dialogue between the Syrian sides on the country’s future.”

The latest agreements in Cairo have been made possible by the steadfast position of Moscow and Beijing, which are trying to prevent interference in Syria’s affairs and a violent regime change there. Another important factor was the virtual failure of the “meeting of the friends of Syria” in Tunis on Feb. 24, due to differences among the participants over whether or not foreign interference was appropriate and the amorphous character of the Syrian opposition represented at the meeting. The referendum on the new Syrian constitution also played a part by demonstrating that the majority of the country’s population is in favor of a political settlement of the conflict.

The latest Cairo accords allow the discussion of the Syrian problem to be resumed at the UN and hopefully secured in a Security Council resolution. In October last year and again in February this year, Russia and China vetoed the West’s resolutions that would allow interference in Syria’s affairs. Now the conditions required for a compromise seem to be emerging.