This is Afghanistan’s ‘My Lai’ 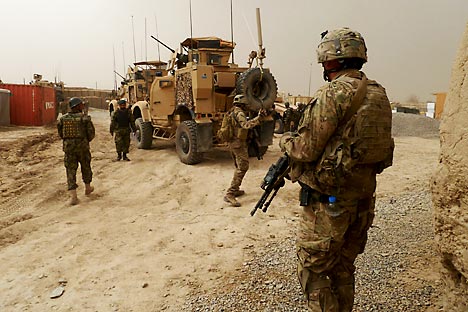 US soldiers keep watch at the entrance of a military base near Alkozai village following the shooting of Afghan civilians allegedly committed by a rogue US soldier in Panjwayi district, Kandahar province on March 11, 2012. Source: AFP/EastNews

The massacre of 16 Afghan villagers in cold blood in the wee hours of Sunday morning in a remote village in Kandahar province near a North Atlantic Treaty Organization [NATO] base irredeemably seals the fate of the 10-year US-led war on terror in the Hindu Kush.

The first-hand accounts emerging from the scene of the crime from various Afghan survivors speak of a group of American soldiers arriving in their village in Panjwayi district some 35 kilometers to the west of Kandahar city at around 2.00 am, breaking into homes and indulging in wanton killings. The dead included mostly women and children who were woken up and shot point-blank on the face.

There are conflicting reports of how many American soldiers were involved. It doesn’t really matter as to whether the horrific killings were perpetrated a rogue sergeant in the US army or by a bunch of drunken American soldiers. Panjwayi could turn out to be Afghanistan’s “My Lai”, that archetypal symbol of the inferno of the Vietnam War.

This war crime on Sunday didn’t occur all of a sudden. It has been brewing for sometime and is not attributable to any particular flashpoint. The fault is entirely of the Pentagon and the White House that they refused to see the writing on the wall. The heart of the matter is that the Afghan war has been aimlessly meandering for the past year or two and any professional army like the US Army would at some point begin to get disoriented, when motivation is lacking and the meaning of the war has got irretrievably lost.

Occasional reports have been surfacing that the US soldiers were beginning to question the very purpose of this continuing war. But the commanders in the Pentagon were determined to give an optimistic picture and nothing would detract from their overall projection of a winning US strategy. Britain’s outgoing ambassador to Afghanistan, Sir William Patey made a devastating critique of the war during an interview with the Sunday Telegraph newspaper only last weekend.

Asked if the western occupation of Afghanistan has now become a part of the problem, Sir William responded in the affirmative: “Could be. Afghans have never been comfortable with foreigners and there comes a point – no matter how benign the intentions, and how much you explain that this is not an occupying force, that we are here [in Afghanistan] under a UN mandate agreed with the Afghans – when you just outstay your welcome.”

The time is overdue for the western troops to exit Afghanistan. Washington, finally, seems to realize this – at least, at the level of President Barack Obama and the US state department – but the issue is how an orderly retreat can now be worked out. It is not only a question of the evacuation of hundreds of thousands of troops and their heavy war equipment – which is itself problematic due to the closure of the transit routes via Pakistan – but also a matter of what sort of Afghanistan the US is leaving behind.

Taking stock of the recent conflagration of “anti-Americanism” in Afghanistan, which led to the death of 8 American troops in the violence that followed the burning of the Koran in Bagram base, Obama spoke of the irreducible minimum objective of the US strategy. He categorically said that the NATO’s “combat mission” would end in 2014, no matter what the US commanders and some other officials might have voiced as opinions to the contrary.

He publicly acknowledged Kabul’s yearning for the restoration of Afghanistan’s sovereignty and promised to set up a “mechanism” to this end. Most important, he spelt out the priority: “We are not interested in staying there [in Afghanistan] any longer than is necessary to assure that al-Qaeda is not operating there, and that there is sufficient stability that it doesn’t end up being a free-for all…”

This is where the Koran burning and the massacre in Panjwayi are going to make matters infinitely more complicated. How “sufficient” could be the “stability” that the US could hope to provide for a future Afghanistan? That is the big question.

Obama repeated least week that the US objective is to make sure that “turning over increasing responsibility to Afghans and a full transition is “not a cliff” and instead will be “gradual, Afghan capacity is built, the partnering with Afghan security forces is effective, [so] that we are putting in place the kinds of support structures that are needed in order for the overall strategy to be effective.”

This “overall strategy” runs into a cul-de-sac now. From this point onward, the “trust deficit” between the US and Afghan soldiers is only going to deepen. President Hamid Karzai himself reacted with fury to the Panjwayi massacre. The Taliban have called for reprisal killings of NATO troops to avenge for the Panjwayi massacre.

Washington is frantically making attempts to calm the Afghan mind, but the anger is soon going to find expression in more acts of violence directed against Americans. From this point, it is going to be a relentless downhill slope that is fraught with great dangers for the US.

The Soviet withdrawal from Afghanistan was carefully choreographed by Moscow, which negotiated over time the requisite underpinnings of local understanding with various Mujahideen elements operating on the Amu Darya region and the Afghan-Tajik border, and banked on an overarching regional consensus conducive to the troop pullout.

But none of that is in place today as the US begins to withdraw. The head of the US Central Command Gen James Mattis is visiting Pakistan in the coming week or so. But ultimately, the US will have to depend on the Northern Distribution Network in far greater measure than today.

That, in turn, entails a higher level of understanding and cooperation with Russia and the Central Asian states. Looking beyond that, the US strategy to establish military bases in Afghanistan now virtually becomes a closed chapter. Karzai will need to factor in that the Afghan popular opinion will be hostile to the foreign military presence, and no leader in Kabul could afford to overlook the groundswell of anti-American feeling sweeping the Hindu Kush.

In sum, the US faces an ugly prospect of having to “cut and run” unless it can quickly work out some sort of understanding with the Taliban. The process of transferring 5 leading Taliban detainees at Guantanamo Bay to Qatar is being speeded up. To be sure, it is an important “confidence-building measure” that would to an extent placate the Taliban. But whether the Taliban would be prepared to reciprocate by rolling up their sleeve and doing a deal with the US still remains far from clear. Indeed, the Taliban now sense “victory” and won’t be in a tearing hurry to compromise.

On the other hand, Pakistan’s Afghan policy stands vindicated. Pakistan’s calibrated “strategic defiance” of the US in the past year or so since the 2-month detention of the CIA agent Raymond Davis in January 2011 has bought Islamabad the much-needed time and space to maneuver itself into a situation where Washington would have no choice but to accommodate its legitimate interests in the post-2014 scenario in Afghanistan.

Paradoxically, however, while Pakistan is well–placed to seize the window of opportunity, it also faces an immense challenge of having to decide what sort of Afghanistan it wants as a neighbor. For the foreseeable future, Afghanistan is going to be in a state of some turmoil. One thing that is going to be decisive is the willingness of the various Afghan groups to come to a power-sharing arrangement that keeps the turmoil from boiling over.

The most recent signals from Islamabad – especially the statements in the past fortnight by Prime Minister Yousuf Gilani and Foreign Minister Hina Rabbani Khar – suggest that there is a furious churning going on in the Pakistani mind. These are early days but the incipient trends of new thinking appear to be in a positive direction, as Islamabad insists it is willing to show far greater inclination than ever before toward the idea of a broad-based power structure in Kabul that helps enduring peace.

In this backdrop, the role of Russia and the Central Asian states is going to be critical in building up a regional consensus with Pakistan (and Iran). An early visit by President-elect Vladimir Putin to Pakistan will probably help matters. If a visit could take place even before the NATO summit in Chicago in May (with focus on the Afghan endgame), Pakistan will have the requisite confidence in its growing strategic autonomy to work for an Afghan settlement that serves the interests of regional security and stability.

All in all, in the tide of a war hanging so very perilously on the balance, the tipping point often comes in what might deceptively seem at first glance a mere faceless happening in a river of blood. Of course, the so-called My Lai mass murder by the US combat troops in a hamlet of the Son My village in South Vietnam 44 years and 4 days ago was far more gruesome – anywhere between 347 and 504 unarmed civilians were slaughtered by the American troops.

But quintessentially speaking, My Lai was a murder in the name of a war that lost its meaning, and became a turning point in the Vietnam War. In this respect, Panjwayi massacre is also destined to be a watershed event in the Afghan war.