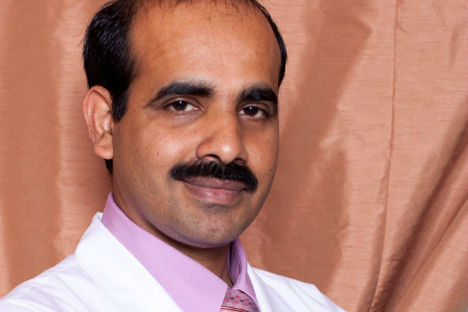 Dr. Mohammed Ali, head of the Ayurveda "Kerala" clinic in Moscow, has worked in Russia for more than 15 years. Ali was invited to Russia in 1996. He treated the 1988 Chernobyl nuclear tragedy victims suffering from radiation, with positive results. P

Not many knew about ayurveda two decades ago. Now, more Russians are seeking Indian herbal cure.

Ayurveda, the centuries-old system of medicine in India, is rapidly becoming popular in Russia. “A lot of patients who prefer herbal medicines, oils and massages as ways of treatment and crave for attention that they don’t get in modern hospitals come to ayurvedic clinics,” says Dr. Mohammed Ali, head of the Ayurveda "Kerala" clinic in Moscow.

But the road to success wasn't strewn with roses . Ali traces the popularity of ayurveda to the wave of globalisation in the 1990s. However, in contrast to India where generations of people had lived by the ayurvedic regimen, it took time for Russians to learn to trust the ancient Indian medical science. That's one of the reasons Ali got Doctor's degree and postgraduation at the Russian People Friendship University to combine ancient ayurvedic knowledge and modern medical science. "For the first 2 years that I worked in Russia we cooperated with Russian doctors. We treated by ayurveda medicines and massages, and they investigated the patients before, during and after our treatment. It also helped that many Russians now travel to India and learn about ayurveda,” feels Ali.

Back then Russians perceived ayurveda more as a system of purely cosmetic procedures helping to keep skin glowing or hair in a good condition. But they were surprised to learn that ayurveda could treat even serious diseases and medical conditions like cerebral palsy.

A firm believer in a symbiosis between ayurveda and modern medicine, Ali says the most frequent ailments he has come across in Russia are respiratory diseases triggered by cold climate, gastro-enterology disorders and stress-related health problems. “I think a lot of ailments are caused by these reasons: stress, unhealthy diet and lack of movement. There are plenty of cases of arthritis and metabolism problems due to the lifestyle,” says Ali. Also ayurveda strives to cure people without side-effects.

Ali is confident that “Indian medicines will be as efficient for Russians as they are for Indians as diseases are the same everywhere.” He says there are no problems in transporting Indian Ayurvedic medicines to Russia because they are herbal medicines and don't contain harmful chemical elements. With ayurveda becoming popular, discussion forums have sprouted on the internet where ayurveda followers ask questions about this system of medicine and share their experience. But ayurveda rules have to be adapted to Russian realities. “As people eat too much meat nowadays, better to reduce the intake and I would rather say vegetarianism is healthier than excessive animal diet even though ayurveda doesn’t advocate strict vegetarian diet,” Dr. Mohammed Ali explains. "Traditional Indian diet of rice porridge, peas and spices isn't very suitable for Russia. Besides, Indians have "genetic memory" of vegetarianism and specially adapted intestinal flora." Ayurveda is also about attitude and mental habits. One should get rid even of bad habits by 1/4, teaches ayurveda. And this ayurvedic principle should be good for Russians who sometimes behave impulsively.