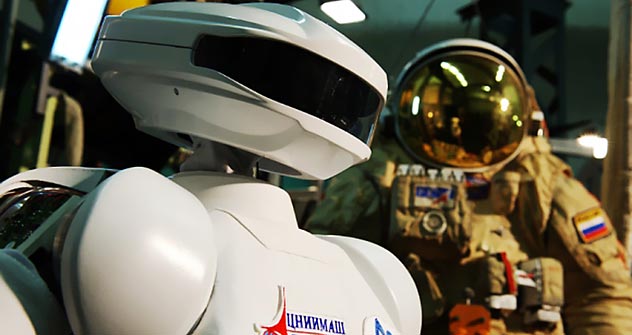 Russian robot differs from Western developments in that it is able to transmit to the human operator not just a picture and sound but the whole range of sensations, including tactile ones. Source: Press Photo

Russian scientists have created a humanoid robot-cosmonaut capable of working in orbit. The developers of the robot, known as the SAR-400, have said that it can carry out minor mechanical work independently such as tightening screws, playing chess and examining the spacecraft skin for cracks.

Over the next two years, the robot will be sent to the International Space Station (ISS), and, assuming that goes well, the SAR-400 will eventually be sent to the Moon, Mars and other planets. For their part, however, cosmonauts are sure that no robot will replace a human.

“The most important attribute of a human is the ability to perceive the surrounding world. And no machine can do that,” said cosmonaut Sergei Avdeyev, although he added that such a robot would be very useful in space.

According to the Avdeyev, in November 2011, when the SAR-400 was being tested at the cosmonauts’ training center in Star City, operators used it to tighten screws and open hatches on a ground-based copy of the Russian ISS module, and worked with the Vykhod training facility, where cosmonauts practice spacewalks.

Although working with the robot in this context was interesting, Avdeyev believes there is only so much the SAR-400 can contribute to the ISS at this point. “There are far more interesting objectives than helping cosmonauts on the ISS,” Avdeyev said. “That’s why I see this visit by the robot to the station as a test.”

Oleg Saprykin, head of manned programs at the Roscosmos Central Engineering Research Institute, said that the SAR-400 is the first space robot developed by Russia in the last 20 years.

“A mechanical arm was made for the Buran and for the Mir station. However, not a single copy got into space. There have been no developments since then. This is our first step towards a robot cosmonaut,” Saprykin said.

He added that robotic devices are already in use on the ISS, but only for standard operations connected with moving items and freight. The first humanoid robot – or robonaut – was delivered to the ISS by the Americans, but it “lives” in their module and is effectively not used.

In addition to Russia, Japan and the Germany are also preparing a robot for use on the ISS. The Japanese are preparing to send the Asimo robot to the ISS to provide company and psychological relief for the crew. The German robot is called Justin, but not much else is known about it.

Andrei Nosov, head of the Moscow branch of the Androidnaya Tekhnika company, which built the SAR-400 for Roscosmos, said that the Russian robot differs from Western developments in that it is able to transmit to the human operator not just a picture and sound but the whole range of sensations, including tactile ones.

“It uses a special technology that relays pressure from the surface to the manipulator’s gloves. With the help of the robot, the operator can literally feel the surface. These are sensations that could not be transmitted before,” Nosov said.

He added that the principle will be used in the study of other planets – the operator will control the robot with the aid of a special vest and a wrist manipulator, and the robot will use cameras, microphones and other sensors to transmit a picture to video glasses, sound to earphones and tactile sensations to the gloves.

“It is true that we have not yet worked out how to transmit the signal. Light takes five seconds to travel to the Moon, and 15 minutes to get to Mars. But we’re working on it,” Nosov said.

According to him, micro-programs for supervisor technology will be used for work in remote locations, when the robot is given the vector of movement or the objective is set and the robot itself decides how to fulfil it. In addition, programmes for automatic work in various regimes are built in to the android’s “brain.”

President Dmitry Medvedev “interacted” with the SAR-400’s predecessor in December 2008 at the first Russian Youth Convention. At that time, the president promised to spend billions of rubles on developing innovation, but he gave a reminder that he was expecting “a corresponding matching return.”