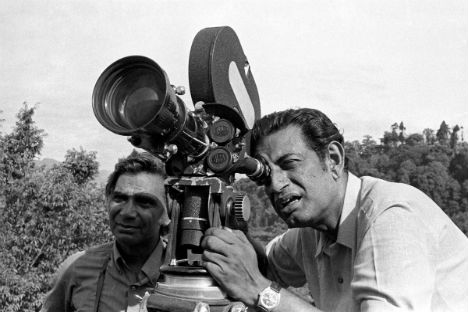 “His films make the truest references to life. He invites the audience to join his narrative and get directly involved with his characters. His work is sans any intrusive showmanship”

Filmmaker and human rights activist, Davlat Khudonazarov speaks about the cinema of the legendary Indian director Satyajit Ray and its universality.

Davlat Khudonazarov sees a “dewdrop just outside his house, a dewdrop on a little blade of grass, a dewdrop which reflects in its convexity the whole universe”, the dewdrop of Rabindranath Tagore’s poem written for the young Satyajit Ray. Film critics observe a connection between the simple human settings of Khudonazarov’s films and Ray’s poignant depictions. As for the Tajik filmmaker himself, he considers the Bengali director a master auteur, an Ustad.

Davlat Khudonazarov (1944-) is a Soviet filmmaker, politician and human rights activist. Davlat was born 13 March 1944 in Khorugh, Tajikistan. Khudanazarov was a prominent filmmaker when he was elected People's Deputy from Tajikistan to the Supreme Soviet of the USSR in 1988. He was elected the chairman of the USSR Union of Cinematographers in 1989. He was the chief peace-negotiator between the army and the demonstrators in the February 1990 Dushanbe riots. In 1994-95 he was Peace Fellow at the United States Institute of Peace, and Galina Starovoitova Fellow in Human Rights and Conflict Resolution at Kennan Institute of the Woodrow Wilson Center in 2005.

“His films make the truest references to life. He invites the audience to join his narrative and get directly involved with his characters. His work is sans any intrusive showmanship,” Khudonazarov describes what appeals to him in Satyajit Ray’s films. A former chairman of the erstwhile USSR Union of Cinematographers, Khudonazarov ascribes his initiation into Ray’s cinema to a remark by Akira Kurosawa, the influential Japanese filmmaker, “Kurosawa admitted that Ray’s films had caused a fundamental change in his conception of the cinema. This gave concrete meaning to an Indian name which until then was only an abstraction; for in those days Ray’s films, despite their fame, were not to be found either in our cinemas or in our archives. I knew I must see them, without fail.”

“I shall never forget the first time I saw Pather Panchali.” Khudonazarov recalls watching the Bengali language movie when he was just beginning work as a director, “The film was without subtitles, but we seemed to understand everything down to the last nuance. And when the music of Ravi Shankar wept for the father stricken by the death of his daughter, we could no longer contain our tears and felt we were taking part in a miracle of creativity. Life had been transformed into art and art back into life, the life of our spirit, of our very being, which in some way had been altered by this experience. The other had become our own. From and on we belonged to the world which had given to us Ray and which Ray had given to us.”

Pather Panchali (1955) won the Best Human Documentary at the 1956 Cannes Film Festival and Khudonazarov who is a human rights activist and has often played the role of a peacemaker during turbulent times, derives a lot from it “Ray makes us see and hear anew events and emotions that are common to humanity – births and funerals, friendships and quarrels, love and intolerance, nobility and atonement for guilt. He refracts them all through his intense personality, and they acquire fresh meaning for individuals everywhere.”

Khudonazarov enumerates the relevance of Ray’s movies to his own country “The Home and the World, (Ghare Baire, 1985) warns about the dangers of national and religious division, of social demagogy and of cult of the self in transitional periods of history. But how can one understand its wisdom if one does not know Charulata (1964), that remarkable drama of love and self-denial against a background of liberal-democratic national consciousness? And surely my compatriots should see ‘The World of Apu’ (Apur Sansar, 1959) with its prophetic denouement: the reconciliation of Apu with his fate and with his son, with his responsibility for the future.”

In “The Music Room” (Jalsaghar, 1958), Khudonazarov sees the epitome of Ray’s unification of the fundamental contradictions of the world, “Here is a historical drama that transcends its story and explores a complex of profound betrayals accumulated in society and in men’s souls. Is there not a contradiction between the universality of the problem and the film’s setting, language and intricate music, which are that of the elite and are probably inaccessible even to most Indian viewers?”

For Khudonazarov who has suffered much of his life’s work either being banned or destroyed, consumed by political strife, there is hope in Ray’s vision, “For us raised on the idea of society’s primacy over the individual, it is crucial to see how in Ray the finding of a solution to the problem of an individual turns out to be no less significant for the fate of a nation, or even of the world, than the search for the philosophical truth of the elimination of social conflict.”

A keen filmmaker, Khudonazarov connects Ray’s cinema back to its European inspirations “It was much later that I realized how much Ray was indebted to the Italian neo-realists and to Jean Renoir, to our own directors Eisenstein, Pudovkin and Donskoy.”

Khudonazarov visited Kolkata in 1987 with the sole purpose of meeting Satyajit Ray “Just as a Muslim visits Mecca, I wanted to pay my respects to Ray. Knowing him to be extremely tall, I took with me, as a present to him, the largest Tajik robe I could find. Even that turned out to be too small for the towering figure of Indian cinema. I had always known that I would find in him something essential for me as a filmmaker and as a human being. In reality, our meetings exceeded all my expectations.”