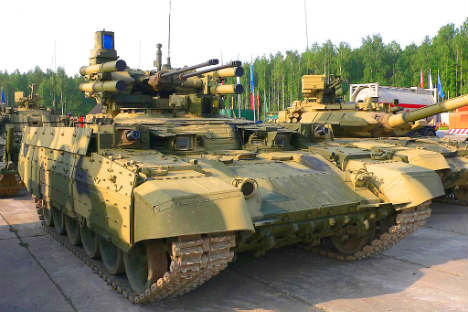 Russian small arms and military hardware have been demonstrated in Thailand at Defense & Security, the largest weapons expo in the Pacific.

According to Russian Technologies State Corporation, which has organized the Russian exposition, products of three Russian factories have been exhibited at the expo: Uralvagonzavod (UVZ), Instrument Design Bureau (KBP) and Izhmash. In fact, the Russian expo portfolio included no latest innovations.

"Nobody offers the very edgy products for exports. We’ve done a lot of analytical job and brought to the expo those weapon systems that are in demand in this region", a representative of Russian Technologies has told Izvestia.

Based on the findings of the Pacific region’s demand study, the Russian exhibitors have brought to the arms show a proven set of Russian small arms, shoulder-fired grenade launchers, and T-90S tanks.

The latest model of heavy weaponry systems represented in Bangkok is a tank support combat vehicle released in 2001.

A source in the Federal Service for Military-Technical Cooperation says that Instrument Design Bureau (KBP) has shown in Thailand its anti-tank missile systems: the Kornet-E and the Metis-M1.

As to small arms, the Russian delegation has brought the Kalashnikov 100 series and the Saiga-12 carbine developed in 1994 and 1970, respectively.

Experts say the situation with weapon systems in the Pacific region is so complicated that the age of weapons is unlikely to confuse prospect customers. Viktor Murakhovsky, editor-in-chief of Arsenal Magazine, is sure that the Thais might be interested in the Kalashnikov 100 series.

"There are no top notch armies in Asia Pacific and our weapons, particularly small arms, are a perfect choice due to their reliability, durability and usability. However, there are many strong local players: Singapore is showing a very strong presence, Indonesia is actively entering the market. The countries that use the NATO 5.56-mm standard are not interested in the AK-74 and its modifications, but the AK-100 could stir some interest among the Pacific customers", Viktor Murakhovsky says.

The expert adds that it is more profitable for the Russian defense industry to supply the NATO caliber weapons to such countries. According to him, there were several cases in Latin America and the Middle East when the military of those countries were willing to buy batches of small arms, but on condition that Russia would build a local ammo factory to manufacture the 5.45-mm bullets.

However, according to Murakhovsky, no significant contracts were signed at the expo.

"The Russian exposition did not match the exhibition’s format as the show mainly focused on security systems rather than weapons", Murakhovsky has told Izvestia.

At the same time, Igor Korotchenko, director of the Center for Analysis of Global Arms Trade, says nobody expects results immediately after an exhibition.

"An exhibition is about a negotiation process, about making initial contacts. We could expect results only a few months after the expo is over", Korotchenko says.

The next arms show where Russia is going to take part will be held in late March in India.

The text is translated from Russian version originally published in Izvestia