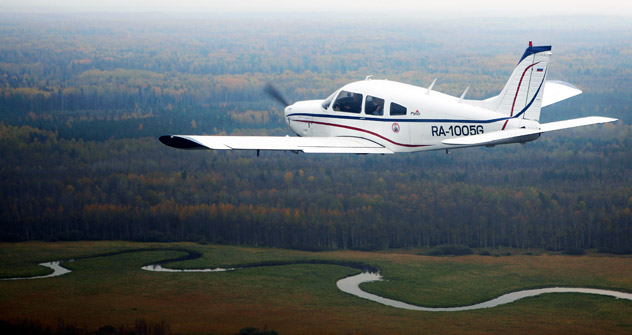 Light aviation, which almost completely disappeared in the 1990s, has been making its first steps towards recovery in Russia. Small private aircraft are necessary for basic transportation in some areas of Russia; the world’s largest country has thousands of settlements not accessible by surfaced roads.

Private planes are no longer considered exotic in Russia. With a price tag about the same as a luxury car, more and more Russians are able to afford a light aircraft. Experts believe there are more than 3,000 private airplanes and helicopters in the country, even though individuals have only been able to fly legally in Russia since a 2010 government decree introduced concept of uncontrolled airspace and dropped the requirement for planes to have mandatory ATC service.

“The new rules are working and have been tested during practical flights,” said Vladimir Tyurin, chairman of the board of the Aircraft Owners & Pilots Association. “The notification procedure has also been simplified. An electronic notice is processed within 30 minutes. There are fewer no-fly zones – a recently drafted instruction from the Transport Ministry will reduce the number of such zones to 400 from 1,200. Most of them are located around Moscow and the Central Federal District – the farther from Moscow, the fewer the zones, so there is less red tape for managing air traffic.”

Despite these positive moves, there are many unresolved issues, including the high import duties applied to foreign aircraft. According to Tyurin, Russians who purchase a foreign-made airplane or helicopter, must pay an additional 42 percent of its cost in customs duties and value-added tax to the federal budget. Additionally, all privately owned airplanes and helicopters, must be registered according to local procedures. If the purchased aircraft is a make that has a Type Certificate, the process is fairly simple, only a few recent Cessna, Robinson and Aeroprakt models have been awarded these certificates. Owners of thousands of aircraft made by other producers have been faced with registration problems. For instance, if a model is discontinued, the producer will not apply for a Type Certificate in Russia, but Russian officials will not register a serial plane as a “custom-made aircraft.”

“There is a way out,” said Tyurin. “You can upgrade your plane a bit by installing additional equipment that will suffice to have the model deemed to be a custom-built aircraft. This is a relatively fair means for circumventing the legislation, but it would be easier for everyone if the rules were changed and foreign Type Certificates were accepted automatically, without additional procedures wrapped in red tape, thus having foreign certification procedures recognized as safe.”

Once a plane has been registered, it must be maintained, which is harder than it sounds. “Russian aircraft maintenance rules do not cover light aviation. The requirements on maintenance centers working with light aviation are so stringent that often they are simply unprofitable,” Tyurin said. According to him, there are a few centers that service Robinson helicopters (of which there are about 300 in Russia) and Cessna airplanes (of which there are around 100), and they report profits. But the state needs to reduce unreasonable requirements in order for new maintenance centers to be set up and work with other aircraft models.

These problems are irritating, but not insurmountable; the bigger challenge for Russian owners of private planes is the lack of infrastructure. There are currently 300 airports in Russia that accept big commercial carriers, but do not welcome light aviation, and about 500 aerodromes and airfields that do accommodate small planes. In comparison, there are about 5,400 airfields for general aviation in the United States and 580 aerodromes for long-range aircraft.

Development of the infrastructure for regional transportation could have a positive impact on light aviation according to Alexei Sinitsky, editor-in-chief of “Air Transport Review.” In February, Prime Minister Vladimir Putin called light aviation “the only way for a country like Russia, with its vast territory, to connect various regions. It is no good when you have to travel to a neighboring region via Moscow.”

Sinitsky doesn’t have much hope for high levels of state investment in the sector, however. “The recent victories in the struggle against red tape have been due to the enthusiasm of a few well-off and influential people, who have made amateur aviation their hobby,” he said. In some Russian regions, small airfields or landing fields remain operational only because some local businessman or Duma deputy who fell in love with the sky pilots his own airplane from there.