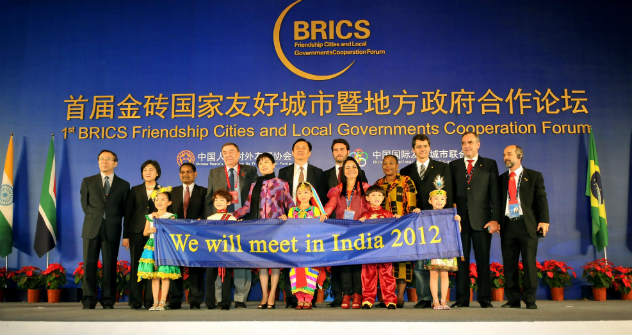 Over the years, the BRICS grouping of the five major emerging economies has come a long way with an ambitious all-encompassing agenda for reforming global governance. All eyes will be on the fourth BRICS summit in New Delhi that is expected to outline future priorities and take the grouping on a new trajectory.

The opening phase in the formation of the BRICS grouping of countries is now over. During that period, some of the most influential figures hurled invectives at Russia, Brazil and South Africa for enjoying the benefits of BRICS membership that were neither deserved nor corresponded to these countries’ status.

India has been assured that it should know better than to form a coalition with the “authoritarian regimes” of China and Russia. South Africa is reproached for showing weak potential compared to the other four members of the group and for its inability to work with them as an equal. South Africa and Brazil are being singled out for their unimpressive GDP growth rates. Russia, with exports focused mostly on raw materials, is considered bad company for the dynamic Chinese giant, which is advised to opt for a compromise with the US instead of attaching its BRICS partners’ cars to its rolling juggernaut.

There is no denying that each of the BRICS countries is showing its own unique trajectory of historic development, characterised by a special sociopolitical situation. In many cases, bilateral relations retain adverse consequences of bygone conflicts and contradictions. One could hardly expect all five BRICS members to share exactly the same position on the most pressing issues on the global agenda. In some cases (Libya), they are in total agreement, whereas in other cases (Syria), they might interpret the situation differently, albeit with due respect for the arguments presented by the coalition partners.

Yet there is one most compelling argument in favour of the BRICS. Such a massive group (representing more than 40% of the world’s population, more than 29% of the land (without the Antarctic) and a quarter of the world’s GDP, would be impossible if there were no common denominator to their national interests, which had taken shape by the early 21st century. Sensing the inability of international institutions to secure efficient regulation of the global economy and world politics, the BRICS countries are willing to reform them.

Knowing fully well the limitations of individual efforts, they resort to the forms and mechanisms of collective action to address this challenge. It is for good reason that Vadim Lukov, Russia’s ambassador-at-large and BRICS negotiator, prefers qualifying the BRICS group as an “alliance of reformers”, meaning their shared objective is to reorganise the key international, primarily financial and economic, institutions.

Results of the opening phase

Six years since the launch (if we consider the first consultations of the “four” at the level of foreign ministers to be the start) and three years after the first BRICS summit, it may be said with confidence that the new alliance is shaping up fast. Moreover, there is good reason to believe that the international coalition, now in the format of the “five”, has been successfully established.

The organisation has been formed for the most part on a platform of the recognition of the need to rebuild the global financial and economic architecture. The member-states did not go beyond this range of problems for some time. There were originally many voices within BRIC, then BRICS, calling for pragmatism and moderate objectives for the new organisation, so as not to overload the common “boat” with too much responsibility. Nevertheless, some of the key problems in the world today unfailingly made their way on to the BRICS agenda (from climate change to renewable energy).

The mechanism for interaction within this grouping evolved very soon into the summit format of leaders’ meeting. Yet the BRICS remains a weakly institutionalised structure and acts on an informal basis. Even so, the grouping has seen its agenda and main activities diversify. The result has been engagement of a broader range of executive authorities of the member states, representatives of the academic community and business structures. Ministries of finance, economics and agriculture and national security institutions soon joined diplomatic agencies in multilateral BRICS consultations. Think tanks and business forums are regularly organised in conjunction with summits. A mechanism for interaction between the development banks of the five BRICS economies has been developed. Consultations have started between healthcare agencies. Leading UN institutions and other international organisations host sectional consultations of official representatives of the BRICS member states. In other words, the scope of cooperation and intensity of contacts  has diversified considerably.

The effect of the political and diplomatic convergence is making itself felt, facilitating bilateral trade and economic exchange. During the recession-affected years, trade within the BRICS economies could not but slow down, but it recovered much faster than other segments of the world market. Trade between Russia and Brazil increased 18% year-on-year in 2011, approaching the record reported in 2008 ($7.16 billion and $7.985 billion in 2011 and 2008, respectively). Trade between Brazil and China showed a 37% increase and that between Brazil and India expanded 20%. Russia and China saw mutual trade grow 42% in 2011 from 2010, reaching $84 billion. Last year, trade between Russia and India contracted, although a steady growth had been observed prior to 2011 ($4.3 billion in 2007, $6.9 billion in 2008, $7.5 billion in 2009 and $8.5 billion in 2010). The volume of China’s trade with India exceeded $63 billion in 2011, compared to $42.4 billion in 2010). Russia’s membership of the World Trade Organisation will give an additional impetus to multilateral trade and rectify the situation in Russian-Indian trade relations.

Yet it would be premature to speak about broad cooperation and large-scale projects within the grouping. Humanitarian cooperation, designed to ensure mutual understanding at the level of civil society, is also insignificant. Can BRICS be satisfied with its progress? Does it guarantee the solidarity of the member states, their ability to overcome disagreements and disputes inherited from the past? Is this progress sufficient to secure the efficiency of the BRICS group and enhance its influence on the world stage?

It is hard to give an unambiguous answer. I believe that, ahead of the fourth BRICS Summit, the member states have completed everything deemed necessary for the initial phase, but not everything that might have been realised. First, we cannot say that BRICS has made the final decision concerning its institutional model. Second, it is not yet clear how BRICS will position itself among the global regulation structures and mechanisms. Third, BRICS still lacks mechanisms allowing productive multilateral cooperation in the economic, technological and scientific areas.

Priorities for the future

The BRICS are, therefore, accelerating their efforts to become part of the organisations that will form the global regulation “club” of the 21st century. BRICS is already, de-facto, taking part in the search for new formulae for global regulation, working with the G8 and being part of the G20, which are weakly formalised structures, too.

In the meantime, BRICS will have to focus on expanding official and working contacts with international organisations, especially the United Nations institutions. This means the coalition requires a legal framework for formalising its status and creating an institutional platform to cooperate with the key international actors.

On the basis of its current objectives, BRICS will not constitute a traditional economic integration structure. This does not mean, however, that the coalition does not require its own instruments and schemes for implementing large-scale multilateral projects that envisage investment and production cooperation. BRICS already has an impressive package of such proposals but their implementation is contained by the absence of adequate organisational mechanisms and financial support instruments, rather than lack of political will.

I suppose that, in this context, an ad-hoc mechanism is more appropriate. A good example is the activity of the Latin American and the Caribbean Economic System (SELA). SELA member states – not necessarily all of them but those that are most interested in some specific project – form an “action committee” with a mandate valid for the period of the project. As for the missing financing instruments, BRICS may acquire them following a decision concerning cooperation between the members’ development banks.

The functions of the BRICS secretariat have so far been performed by the country hosting the regular summit of the alliance on a rotation basis, which has specially engaged representatives of local diplomatic agencies for this purpose. Efforts to diversify the agenda and the growing volume of activities will eventually call for a permanent coordinating agency to be set up for the organisation. It is important that this agency be compact and mobile, as well as immune from red tape.

BRICS is unlikely to avoid addressing modern challenges to international security. It is important to be able to respond in a timely fashion to life-threatening risks and challenges. Cross-border drug trafficking is especially important, as it claims as many lives as long-term military conflicts do.

The BRICS countries are located within the areas covered by the two main drug production and trafficking centres – the Afghan and the Andean. A weak interaction between the countries that fall victim to drug mafia and institutions combating drug trafficking could erode the state, society and legal economy. Specialised BRICS state agencies should, therefore, coordinate their activities on a regular basis.

We cannot afford to have any illusions about the BRICS’ prospects. The world is making a transition towards a polycentric order but this process will take time.