Indians are awaited in Russia 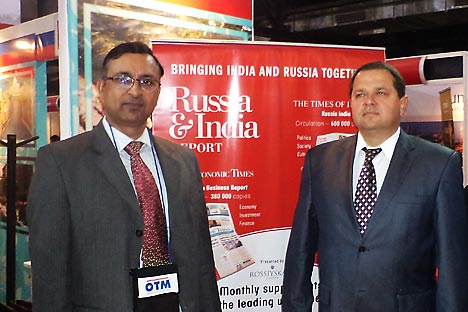 At the end of February one of the leading Indian travel shows OTM took place in Mumbai. The Visa Center of the Russian Embassy in India – Salvia Travels Company - presented Russia there. Mr. Prashant Chaudhary, the head of Salvia Travels, answered questions by RIR.

Russia & India Report: Dear, Mr. Prashant,  could you please tell about the Visa Center of the Russian Embassy in India recent activities.

Prashant Chaudhary: We signed a contract with the embassy and started working as the Visa Center 6 years ago. We work in a close partnership with the Embassy of the Russian Federation in India, its consular department, with the Consulate General of the RF in Mumbai and also with the Federal Agency for Tourism of the RF. We also have joint projects with the Association “The World without Borders”. As a visa center we not just simplify the process of executing Russian visas for people, but we also provide travelers with the full package of information about Russia: we tell them about its climate, places of interest, we give them some practical advice…

We try to promote traveling to Russia among Indian tourists. Last year we sent over 2500 tourists to Russia which exceeds the showing of the year before the last one by 40 percent. And this year we have set an aim for ourselves to double the achievement of the last year.

RIR: What do you do to promote traveling to Russia among the Indians?

P.Ch.: First of all, I’ll repeat that, we guarantee a smooth and easy process of getting a visa. And this is a great deal, as every person who has decided to go abroad thinks about getting a visa first of all.

In addition, we suggest traveling to Russia to large firms that send several hundreds of their employees on corporate tours (for both having a rest and participating in symposiums, exhibitions and conferences) and use it as the way to encourage their staff. It should be mentioned that in India corporate tourism is very popular. We call it MICE. M is meeting, I – incentive, C – conference, E – exhibition. Groups of 200-500 people often use MICE offers for traveling. We are the first who have begun using MICE for Russia. And we are proud that we’ve already sent several groups of this type to Russia. And recently we’ve even managed to send two groups of 1200 and 700 people there. At the same time we are very proud by the fact that some big companies which have already used our services have been so much pleased with our service that they’ve begun making repeat orders.

We also consider ourselves to be pioneers in family traveling to Russia. In addition, we helped to organize a number of exhibitions in Russia, for example, the Indian Chemical Exhibition in Russia – Chemical & PFMAI – and some others.

RIR: What do Indian tourists prefer to see in Russia?

P.Ch.: Of course, their most favorite places are Moscow and Saint Petersburg. In addition, some like the towns of the Golden Ring. Many like cruises, some like going to a circus and a zoo, to various museums, for example, a museum of cosmonautics …

We try to advertise among the Indians other places of Russia as well – Lake Baikal, the Altai Mountains, Kremlins in the Volga Region, the Trans-Siberian railway, we plan hunting and fishing tours (for those who don’t adhere to vegetarianism).

RIR: What scares Indians about Russia?

P.Ch.: First of all, the Indians are afraid to find themselves away from the Indian cuisine without which the majority of the Indians feel uncomfortable. There is a settled stereotype that it is always cold in Russia, so we have to explain them that in the period from April till October the weather in Russia is very pleasant, as a rule.

RIR: And what do Russian tourists prefer to see in India?

P.Ch.: The Russians really like going to the seaside, to Goa, many like our mountains and, of course, everyone wants to see the golden triangle: the fantastic Delhi-Agra-Jaipur.

We are thinking of attracting the Russians by some new services and places to visit. For example, we offer a high-class rest at a spa resort in Rishikesh.

RIR: What can you say about the results of this exhibition?

P.Ch.: Thanks to OTM we’ve already gathered several tourist groups that will soon go to Russia. And many more groups are in pipeline now. Taking part in OTM helps us to tell about Russia, Russian places for tourists and to attract Indian tourists.