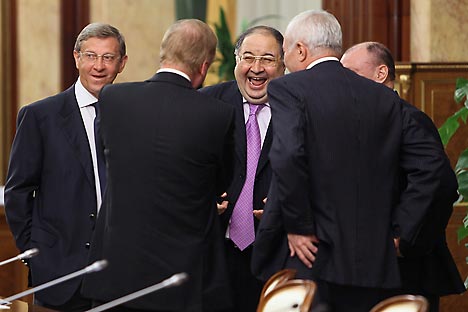 Russia ranked second by the number of the world’s wealthiest people this year — leaving China just a notch behind — with tycoon Alisher Usmanov becoming the country’s richest businessman for the first time after he placed his bets on the burgeoning high-tech industry.

A total of 96 of the world’s 1,226 billionaires come from Russia, putting it in second place — up from third place last year — after the United States, which boasts 425 people whose fortune exceeds $1 billion, according to the annual billionaire ranking published by Forbes magazine Wednesday.

Russia has a historic reason to be among the world’s leaders by the number of billionaires because control over the biggest companies was consolidated in the hands of a few businessmen during the privatizations in the 1990s, said Vyacheslav Smolyaninov, a strategist atUralSibCapital.

“It’s a typical Russian phenomenon,” he said by telephone.

The second reason, Smolyaninov said, is Russia’s reliance on raw materials. The country’s economy has yet to pick up, “but the downturn is over for sure and careful optimism exists,” he said.

Indeed, most Russians on the Forbes list own assets in the metals and mining or oil and gas industries.

But while falling metals prices slashed the fortunes of the owners of metal companies, Usmanov, who controls the country’s biggest iron-ore producer Metalloinvest, saw his wealth grow to $18.1 billion from $17.7 billion in 2011.

“Usmanov took the lead on the list of the wealthiest Russians, and it was not metallurgical assets — on which his fortune had been based previously — that helped him to achieve it, but virtual ones,” Forbes’ Russian edition said.

“It’s proper to call him not a metals tycoon, but a high-tech now,” Forbes’ Russian edition said.

As a result, the tycoon pushed back the owner of Novolipetsk Steel, Vladimir Lisin, who has topped the Forbes ranking of Russian billionaires for the last two years.

Lisin’s fortune dropped from $24 billion in 2011 to $15.9 billion, putting him in second place in this year’s ranking.

His rival Alexei Mordashov, owner of steel giant Severstal, was ranked third with an estimated fortune of $15.3 billion.