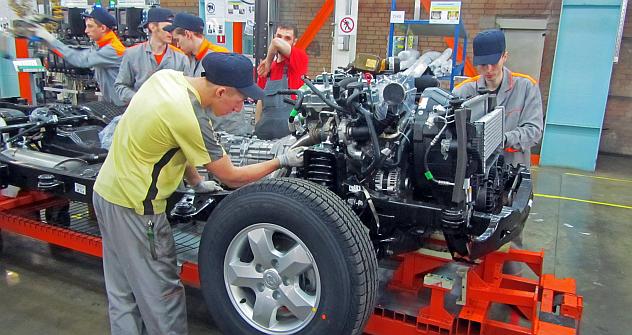 Car giant Sollers shows how to set up a profitable automobile factory in Russia’s Far East.

At the peak of the economic crisis in 2009, Russia’s Far Eastern city of Vladivostok erupted in protests after a decision in Moscow to raise import duties on cars. Residents took to the streets to defend a major source of revenue for the entire Far East – driving Japanese second-hand vehicles to the country’s Western territories for resale at a hefty profit. Following the introduction of new tariffs, the number of cars imported annually would plummet from well over 200 thousand to around 60 thousand.

As thousands of riot police were flown in from Moscow to restore order, Prime Minister Vladimir Putin pitched a solution – assemble the cars in the Far East, thereby making the Japanese and Korean brands domestically manufactured and not subject to the same duties. By the end of the year, the Sollers automobile plant in Vladivostok, which currently manufactures five models of the Sang-Yyong SUV, was launched after moving production from Tatarstan. “It was a political decision,” explained Vasily Avchenko, author and Vladivostok correspondent for daily Novaya Gazeta. “It was part of a broader carrot-and-stick strategy for localizing car production in Russia.”

After two years of work, the project is being hailed as a success by the Sollers management, which is quick to deny any political connection. “Sollers is a private company with an independent board of directors; the government doesn’t decide our development strategy,” explained Sollers Far East Director Alexander Korneychuk from his swanky office on the 3rd floor of the factory overlooking Vladivostok’s harbor. This week Sollers Far East launched production of its fifth model, the Actyon – the first with a non-diesel engine. Production of the Actyon alone is expected to exceed 15 thousand units this year, while the total number of cars produced is expected to hit 35 thousand versus 25 thousand in 2011.

“We were thinking of relocating production of the Ssang Yong models from our plant in Tatarstan to the sea coast for some time, but we needed a political decision to justify the required infrastructure investments,” explained Korneychuk. The facility now employs 650, mostly young workers. The average age is 27, and nearly a third occupy either management or training positions in the offices located on the upper floors of the factory.

Sollers built the factory nearly from scratch in record time on the territory of a defunct ship repair station. Its bright orange-and-blue facility stands in stark contrast to the brick detritus and broken windows of neighboring buildings. When the company moved in, water was available for two hours a day. $60 million has been spent on infrastructure at the plant so far, with a gas connection still a half-mile away. “When we get the gas hooked up later this year, we’ll be able to start painting and sweltering the cars here on the spot. We’ll have a full scale vehicle production by 2014,” said Korneychuk.

All of the components are imported from South Korea. Each model is assembled piece-by-piece until, at the end of one of the two types of assembly lines, a process workers call “the wedding” attaches the frame to the body of the car. The autos then undergo safety testing before being shipped by railroad to Western Russia. Fewer than five percent of the autos produced at the Sollers Vladivostok plant are purchased in the Far East. Exports to neighboring countries are not being considered as Russia “has the second-fastest growing market of off-road vehicles in the world, after the United States,” said Korneychuk.

Despite the bleak view from the window, the location has been ideal for the operation Sollers is running. “We take the assembly kits off the docks right here,” gestured Korneychuk, “and put them on the railroad over there. Everything is within one kilometer. Our factory has no warehouse because we don’t need one. If a shipment is delayed, we are forced to stop production.” Moving the assembly line to the Vladivostok facility allowed Sollers to lower the price of the Ssang Yyong models throughout Russia (and sell more of them, according to Korneychuk), which currently range in prices in the Far East from between $24 and $40 thousand.

Critics point out that the operation has been profitable thanks to federal subsidies that give Sollers a huge discount on shipping the cars by rail across Russia – subsidies that will eventually run out. But Korneychuk has his sights set higher: “Over the last two decades Japanese cars have developed a certain reputation throughout all of Siberia. People know and like them so much that they don’t require any advertising, a huge savings in costs,” he explained.

Sollers is currently in negotiations with Mazda and Toyota to set up assembly of some of their models in Vladivostok (the Toyota Land Cruiser Prado may be launched later this year). “The original phase of this project was done to convince major international partners that it was possible to assemble cars here, and we did that,” said Korneychuk, adding “once Japanese cars are assembled here in Vladivostok, we’re going to make a huge dent in the second-hand car market.” The new assembly lines will be launched in neighboring empty buildings, property disputes aside. “Those buildings may be abandoned, but they still have an owner,” he emphasized.

Meanwhile Sollers is under obligation by the federal government to localize auto parts production with each passing year. By 2015, no fewer than 10% of the components going into the Vladivostok-made cars will have to come from Russian producers. “We’ve found partners willing to invest in setting up such operations in the region,” said Korneychuk.

Yet Avchenko is skeptical about a full-scale design and manufacturing automobile hub for export to other countries forming in the Far East anytime soon. “I reckon the politics of some nearby countries may prevent them from opening factories here, while the barriers to doing business would probably offset any savings in labor costs,” he said.

For all of the successes of the Sollers Far East plant, it still only assembles foreign-made cars at its facility. Russians frequently lament the absence of a reputable domestic car brand. The time to make one, says Korneychuk, is now. “Russia’s got about five years until domestic demand is satiated and the market begins to grow at normal rates. Lexus showed that you can build a reputable global auto brand amid a normal domestic market, but it will be a lot harder later than if we do it now.”