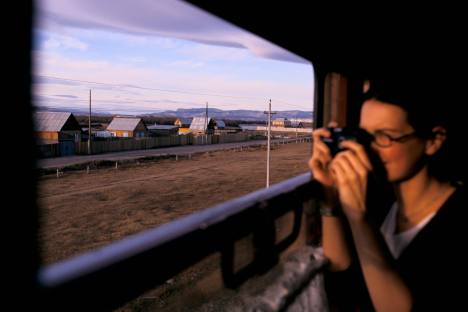 A British tourist shares her experience about the trip to Ulan-Ude, the capital of the Republic of Buryatia, which encompasses part of Lake Baikal.

My first sight of Lake Baikal was through two scraps of material that claimed to be curtains on train 134 from Penza to Vladivostok.

Of course, I know how big Lake Baikal is and that it is the oldest and deepest lake in the world but, even then, I was not prepared for what I saw through the grimy train window.

Lake Baikal is an ocean. Our train passed directly around the southern shore of the lake, so close to the water that I could see the shingle on the beach. The view from this part of the lake is of an expanse of water to the north, east and west. It is not possible to see anything else.

My first sight of Ulan-Ude, however, was rather less impressive. It was pouring down with rain, so my friend Juliet and I cracked and got a (rather expensive) taxi to our hostel which turned out to be about 10 minutes down the road. Ulan-Ude Traveller’s House is a nifty little place and faces on to the main town square which, arguably, contains the city’s primary attraction of a giant Lenin head. Not the rest of him; just his head.

Ulan-Ude really feels like Russia’s first city in Asia; geographically it is in the same time zone as the Australian city of Perth, so it is actually quite far east. Russian cities do have a tendency to start to look the same after a while: they have a Coffee House café, a sushi restaurant, wedding boutique and any number of small kiosks selling pies and cigarettes. All their inhabitants are invariably white and Slavic looking. Ulan-Ude is different. (Although it still has the obligatory ‘Lenin Street’).

The city has the feel of Asia. It is the capital of the Republic of Buryatia which also encompasses part of Lake Baikal. The ethnic Buryatian peoples are related to the Mongolians; some practice Buddhism or Shamanism and some are more ‘Russified’ than others. Ulan-Ude is the last key city in Russia on the way to Mongolia, so it is ethnically quite diverse and is influenced by Mongol culture.

It was, therefore, an exciting place to arrive. What made it more exciting was that we found out that it was possible to have lunch in a yurt. A yurt! Just behind the town hall (where the brides line up to get married) is a restaurant that prepares cheap food for students and workers.

The menu consists of a few, very reasonably priced, options and, seeing as I had no idea what any of them were, I ordered everything. I ended up with a lunch of dumplings, meat and noodle soup and something which seemed to be a cross between a pizza and meat bread. It was all very greasy and meat, but nonetheless edible.

As well as the giant Lenin head, the other top tourist attractions in Ulan-Ude are the Buddhist monasteries called datsans. Up a dirt track, a 20-minute ride along a bumpy road in a marshrutka-taxi is another, smaller datsan, Rinpoche-Bagsha which sits above Ulan-Ude. The view from here is breathtaking. Ulan-Ude is ringed by mountains, a river and forest and, with only the gong from the bell in the monastery to disturb the peace, it is wonderfully quiet.

The datsan on the hill is visitor-friendly. Inside the monastery sits an elaborate new Buddha, painted in gold and visitors are welcome to sit there and observe proceedings or to read (in Russian) about the site. Even if you know nothing about Buddhism the datsan is a beautiful place to visit.

Unfortunately, Juliet and I never made it to the famous Ivolginsky Datsan just outside of the city, which is one of the bigger and more elaborate datsans in the area. For us, a less appealing trip to a Russian hospital was in the cards.