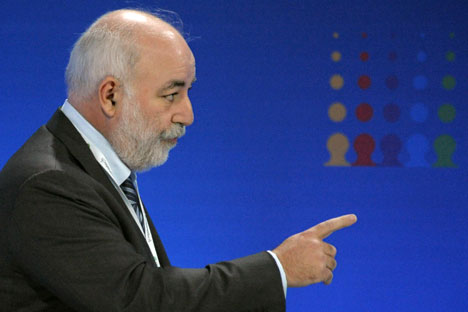 Vekselberg’s resignation might be a result of his ongoing disagreement with RusAl main shareholder Oleg Deripaska. Source: Kommersant

Clash of the oligarchs leaves the world’s biggest aluminum producer without a chairman of the board.

Viktor Vekselberg, owner of the Renova Group and one of Russia’s richest men has announced his resignation from the board of directors of RusAl, the world’s biggest aluminium producer. Vekselberg owns a minority share of 15.8 percent of RusAl through the company SuAl partners, which he co-owns with Leonard Blavatnik. Vekselberg cited the actions of RusAl management in his decision to resign. RusAl, however, countered the claim, saying instead that the move was a successful attempt by the board to unseat Vekselberg, who has served as chairman since 2007, but has not performed his duties for over a year.

RusAl accounts for about 10 percent of the world’s aluminum output. It has branches in 19 countries and sells its products in Europe, North America and Southeast Asia. In 2010, RuAal held an IPO in Hong Kong, selling 10 percent of its shares for $2.2 billion.

Most analysts and market participants take yet a third perspective, seeing Vekselberg’s resignation as a result of his ongoing disagreement with RusAl main shareholder Oleg Deripaska. There are thought to be three main reasons for the conflict, the primary one being differences over the ownership of 25 percent of Norilsk Nickel. Vekselberg and businessman Mikhail Prokhorov (who holds a 17 percent stake in RusAl) wanted RusAl to accept an offer made by Norilsk Nickel’s management and Vladimir Potanin’s holding company Interros to buy out RusAl’s 20 percent stake in the company for $12.8 billion. Deripaska, however, rejected the offer.

Experts say the second cause of friction is RusAl’s decision to sign a long-term contract with the Glencore commodity trading firm, which owns 8.75 percent of RusAl), and that the third reason is that RusAl has not paid dividends since 2008, with the consent of the creditor banks.

There is, however, yet another theory as to why Vekselberg is quitting. In 2010, Deripaska, Vekselberg and Glencore signed an agreement which required Vekselberg to give up his seat on the board to an independent figure after RusAl conducted an IPO. The company listed in January 2010 in Hong Kong.

Regardless of the reason, Vekselberg’ s decision to leave the RusAl board has had repercussions on the market. The company’s depositary receipts dropped by 1.61 percent to 6.1 Hong Kong dollars in Hong Kong on March 13, after which trading was suspended at the request of the RusAl Board of Directors. The company’s Russian shares dropped by 2.3 percent at the start of trading on the Micex index the same day.

HSBC bank analyst Vladimir Zhukov believes that the short-term outlook for RusAl share prices is uncertain. “This year, the price of RusAl shares hinges on the price of aluminum. If it rises, the company’s shares will go up even though Vekseslberg’s departure has highlighted the existence of a conflict within RusAl,” Zhukov said.

This view is shared by Andrei Mordavchenkov, the Partner company’s director for financial market operations, although he points to another important factor in determining the price of RusAl shares: “In addition to aluminum prices, share prices will depend on what Vekselberg does with his stake – sell it and, if so, to whom.”

Interfax, citing its own sources, has reported that Vekselberg has no intention of selling his share in the aluminum company, but this has not calmed the markets. Analysts and investors have speculated that Prokhorov might be interested in purchasing Vekselberg’s share, which would give him more influence within the company. “Mikhail Prokhorov may well be a potential buyer for Vekselberg’s stake. He already owns RusAl shares and he may well want to increase his stake. Prokhorov has experience of corporate wars acquired from Norilsk Nickel, and it was successful experience. He may use it at RusAl,” said Bogdan Zvarich, chief analyst with the Net trading company.

Valery Petrov, deputy general director of the Financial Markets Development Institute, is sure that, under current conditions, only those who already have a stake in the aluminum company might be interested in buying Vekselberg’s shares: “Outside investors are unlikely to buy the shares owned by the head of Renova because RusAl has a big debt burden and numerous court cases on its hands and its future in general is not very clear. So the main potential bidders for the stake – if Vekselberg decides to sell it, which is unlikely – are Prokhorov and Deripaska.”