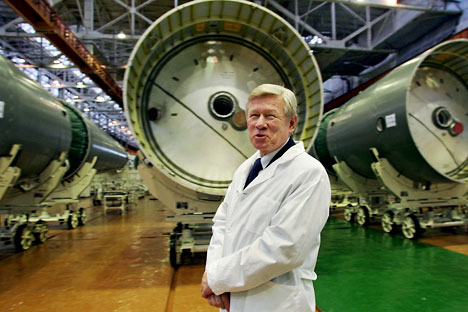 Sergei Ponomarev, the deputy of the Roskosmos head. Source: ITAR-TASS

Russian space agency puts forward a plan for its development through 2030.

The Russian space agency Roscosmos has submitted to the government a draft strategy for space development through 2030. The strategy lays out a plan to accomplish what the Soviet Union failed to achieve – the launch of several long-term space missions to Mars and a manned flight around the moon. Surprisingly, the agency plans to do all this mostly within the constraints of the budget already at its disposal. Agency head Vladimir Popovkin announced earlier that the agency hoped to accomplish all its goals with a budget of between 150 and 200 billion rubles; it has already been allocated 150 billion rubles for this year.

According to Russian daily Kommersant, which claims to have reviewed the draft strategy, the general ambition is to let Russia “consolidate its position among the top three world space powers” in the 2020s. Considering that Russia currently leads the world in terms of the number of launches and, until 2011, it also boasted the smallest proportion of failures (with only three failures out of a total of 86 launches in 2008-2010, compared to two out of 53 launches in the United States), that ambition is obviously ambiguous.

Furthermore, long-term Mars missions and a manned flight around the moon are nowhere near a breakthrough in space exploration; rather, these goals seem more like an attempt to catch up with the U.S. Only American specialists have managed to land space vehicles on Mars that can remain operative for more than just a few minutes, and without deriding to the importance and worthiness of such missions, this not a task that have never been done before. A manned flight around the Moon, dubbed acrimoniously by much of the Russian media as “a 60-year old achievement,” is not a trivial goal, but also not a very inspirational one.

A space tug is a space vehicle that transfers payloads such as geosynchronous satellites or manned spacecraft between low and high Earth orbits, or between Earth orbit and lunar orbit. The cargos are normally not large, and tugs are using cheap forms of fuel. They have two docks to connect to the cargo to the station or a spaceship.

Roskosmos does have one new goal to offer, however. This is a project to create space tugs based on electrical jet engines and asteroid mining facilities. An ion engine is not exactly new in itself, since many space vehicles are already powered by them – such as Japan’s Hayabusa spacecraft, which returned the first samples of dust from the Itokawa asteroid – but no one has so far tried to install them on vehicles designed to deliver cargo from low Earth orbit to a geostationary or Lunar orbit, for example.

Yet the blatantly chimerical characteristics of the engines that Roskosmos allegedly began to build more than a year ago, as well as the plans for all Russian spacecraft designed and launched in recent years, are cause for skepticism. For evidence of this, it is only necessary to mention the CORONAS-Foton, which failed a year into service owing to an electric power design flaw; the Tatiana-2 satellite, which never reached the end of its service period, and certainly Phobos-Grunt – a particularly disappointing waste.

Ares I was the crew launch vehicle that was being developed by NASA as part of the Constellation Program. Ares I was originally known as the "Crew Launch Vehicle" (CLV). NASA planned to use Ares I to launch Orion, the spacecraft intended for NASA human spaceflight missions after the Space Shuttle was retired in 2011. Ares I was to complement the larger, unmanned Ares V, which was the cargo launch vehicle for Constellation. NASA selected the Ares designs for their anticipated overall safety, reliability and cost-effectiveness. However, the Constellation program, including Ares I was canceled in October 2010 by the passage of the 2010 NASA authorization bill.

To determine the likelihood of Roskosmos developing a space tug on its current budget, it is worth comparing the spending of Roskosmos and NASA. Development of NASA’s new heavy lift launch vehicle Ares was eventually suspended because the deadlines were being consistently pushed back and estimates consistently adjusted upwards. According to the latest assessments, this ambitious project could have eaten up a total of $40 billion by 2015 – just above 1 trillion rubles, or five times the annual Roskosmos budget. The cost estimate of the draft design of the Shuttle-Derived Heavy Lift Launch Vehicle based on solid rocket boosters was only a fifth of this. A Russian-made heavy lift launch vehicle capable of bringing a hundred tons of cargo into orbit by 2030 is possible in theory, but it is impossible to know if this would be the case in practice.

According to Yury Karash, a member of the Tsiolkovsky Space Academy, it is quite possible to develop a heavy lift launcher, given no corruption-related losses and efficient management. Meanwhile, the expert also recalled that, as recently as September 2011, Accounts Chamber Chairman Sergei Stepashin openly condemned the misapplication of funds by the Russian space agency. “The strategy can actually result in trillions of rubles of taxpayer funds vanishing into thin air and no new spacecraft being produced,” Stepashin said, adding that the electrical engine space tugs could be truly regarded as the part of the strategy closest to a breakthrough. “Indeed, heavy lift launch vehicles are also an indispensable element – no interplanetary spacecraft can be put into orbit without them,” he said.