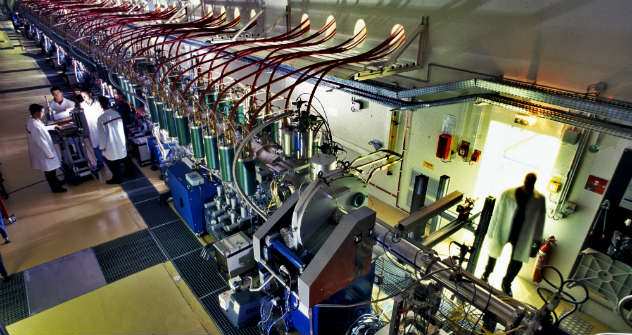 One year after Japan’s Fukushima disaster heightened the controversy over nuclear power, Russia’s leadership remains committed to the peaceful use of the atom. RIR caught up with Denis Kovalevich, head of the nuclear technologies cluster at the Skolkovo Innovation Center, to talk about the many uses of nuclear energy.

Before you came to Skolkovo, you worked on strategic development at the state corporation Rosatom. Was it then that you developed an understanding that there were alternative areas and markets for nuclear energy?

I suppose the idea was shaped even earlier, and I was not the only one. If we take a look at the strategic documents of the nuclear industry of the late 1980s, we’ll see many of the new directions outlined there. There are at least two reasons for pursuing diversification in the nuclear sector. The first is that the market is too sophisticated, so there is a lot that does not depend on us. Take Fukushima — it happened outside Russia, but it had a direct impact on us. The second reason is that the markets for allied technologies are growing much faster than the energy market, but their volumes are already comparable.

The range of the nuclear industry know-how that can be applied outside the energy market is estimated to include at least 500 products and solutions. Many of them constitute part of the new technology platform “Radiation Technologies” adopted by a special commission with the Russian government and given priority status.

Denis Kovalevich was born in 1979 in the Moscow Region town of Troitsk. After graduating from the Higher School of Economics in 2002, he managed a number of consulting projects in Russia’s Volga River regions. Before becoming executive director of the Nuclear Technologies Cluster at Skolkovo, he worked on long-term strategy planning for Russia’s state atomic power monopoly, Rosatom. Since 2009, he has been a member of the President’s Commission for Modernization.

Currently you supervise this platform as director of the nuclear technologies cluster at the Skolkovo Innovation Center?

Yes. This platform is officially coordinated by the Skolkovo Center and our cluster. Overall, four strategic directions have been identified for the nuclear technologies cluster, based upon general development trends in the nuclear power sector, analysis of global progress and this country’s capabilities, including its personnel potential.

I won’t go into detail, but simply enumerate them. They include radiation technologies (radiation-based solutions); development of new properties of materials; technologies to design, construct, model and engineer complex technological facilities and systems; engineering, instrument-making and new electronics solutions. These all are spinoffs of the nuclear program, to a greater or lesser extent.

Why was Skolkovo given authorization to coordinate the “Radiation Technologies” platform, not Rosatom?

There are more than 70 organizations currently engaged in radiation technologies within the scope of this platform, and Rosatom is just one of them. As far as its competencies are concerned, it is, indeed, potentially the most powerful investor and a player capable of assembling end products. But, because of its sheer scope, Rosatom cannot support companies worth, say, $1 million dollars. A nuclear power plant is a tangible facility, but when it comes to what we are going to search for and nurture, the state corporation won’t even notice such things.

We pave the way. We support the creation and development of new projects and companies, that will later be included in the technological chains of global technology corporations by acquiring them, working with them in any way possible. We believe it is crucial that as many people and companies as possible choose this direction in which to move and this platform to rely on when building their long-term strategies. This is the essence of my job. Fundamentally, the main challenge is to start the wave, not just support two or three projects, however promising they might seem.

How much time will you require and what steps need to be made? Are there instruments for measuring and assessing the wave you initiate?

I have a model in my head that looks roughly as follows. Essentially, we are talking about making a decision to launch a new industry. Judging from international practice, a decision of this kind requires five to 10 years, depending on the country. For instance, Singapore launches a new industry once every seven years. They take seven years to think, analyze, check and double-check. I perceive and interpret Skolkovo’s potential in this context as “action research”.

When our grants committee decides to support some proposed project, invest in a startup, it is a chance to assess the viability of the applicant company. We cannot check it by way of analysis, using a piece of paper and a pencil. We need to give people a real opportunity, let them try, face certain obstacles — when you have worked with them, you see their strengths and weaknesses. We need to organize this process.

You referred to Singapore’s experience. What about recent developments in Japan? Do you believe they are thinking about diversifying the nuclear industry and giving priority status to sectors other than nuclear power?

I’m sure that, following Fukushima, this has become much more relevant. They must think about ways to diversify.

In brief, what does Skolkovo resident status offer your foreign partners?

To be very brief, I’ll mention just two benefits. First, this will enable foreign companies to create their own R&D centers in Russia. In Skolkovo, they will be able to establish them without red tape and on a very tight schedule. Second, foreign companies, as soon as they partner up with some of the Skolkovo startups, will enjoy the status of exclusive innovation partner of Russia. When a foreign company joins the center, it gets special status to position itself in Russia.

The Skolkovo team has experience and an understanding of how to deal with administrative obstacles, tackle customs problems, and much more. The center was designed and set up to shake up the existing bureaucratic model.