The age of authoritarian democracy 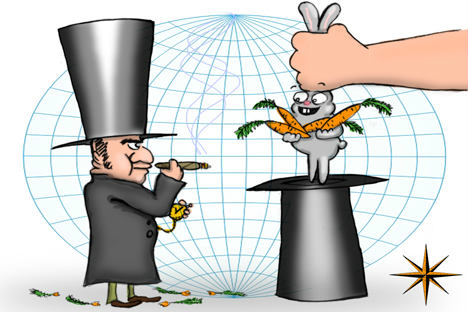 The world is currently being shaken by tectonic changes almost too numerous to count: the ongoing economic crisis is accelerating the degradation of international governance and supranational institutions, and both are occurring alongside a massive shift of economic and political power to Asia. Less than a quarter-century after U.S. political scientist and author Francis Fukuyama declared "the end of history," we seem to have arrived at the dawn of a new age of social and geopolitical upheaval.

Dramatically, the Arab world has been swept by a revolutionary spring, though one that is rapidly becoming a chilly winter. Indeed, for the most part, the new regimes are combining the old authoritarianism with Islamism, resulting in further social stagnation, resentment and instability.

Even more remarkable, however, are the social — and antisocial — grassroots demonstrations that are mushrooming in affluent Western societies. These protests have two major causes.

First, social inequality has grown unabated in the West over the last quarter-century, owing in part to the disappearance of the Soviet Union and, with it, the threat of expansionist communism. The specter of revolution had forced Western elites to use the power of the state to redistribute wealth and nurture the growth of loyal middle classes. But when communism collapsed in its Eurasian heartland, the West's rich, believing that they had nothing more to fear, pressed to roll back the welfare state, causing inequality to rise rapidly. This was tolerable as long as the overall pie was expanding, but the global financial crisis in 2008 ended that.

Second, over the past 15 years, hundreds of millions of jobs shifted to Asia, which offered inexpensive and often highly skilled labor. The West, euphoric from its victory over communism and its seemingly unstoppable economic growth, failed to implement necessary structural reforms, although Germany and Sweden were rare exceptions. Instead, Western prosperity relied increasingly on debt.

But the economic crisis has made it impossible to maintain a good life on borrowed money. Americans and Europeans are beginning to understand that neither they, nor their children, can assume that they will become wealthier over time.

Governments now face the difficult task of implementing reforms that will hit the majority of voters hardest. In the meantime, the minority that has benefited financially over the past two decades is unlikely to give up its advantages without a fight.

All of this can only weaken Western democracy's allure in countries like Russia, where, unlike in the West or to a large extent the Arab world, those who are organizing the massive demonstrations against the government belong to the economic elite. Theirs is a movement of political reform, demanding more freedom and government accountability. It is not a social protest — at least not yet.

A few years ago, it was fashionable to worry about the challenge that authoritarian-style capitalism — for example, in China, Singapore, Malaysia or Russia — presented to Western democratic capitalism. Today, the problem is not only economic.

Western capitalism's model of a society based on near-universal affluence and liberal democracy looks increasingly ineffective when compared to the competition. Authoritarian countries' middle classes may push their leaders toward greater democracy, as in Russia, but Western democracies will also likely become more authoritarian.

Indeed, measured against today's standards, former French President Charles de Gaulle, former British Prime Minister Winston Churchill and former U.S. President Dwight Eisenhower were comparatively authoritarian leaders. The West will have to readopt such an approach or risk losing out globally as its ultraright and ultraleft political forces consolidate their positions and its middle classes begin to dissolve.

We must find ways to prevent the political polarization that gave rise to totalitarian systems — communist and fascist — in the 20th century. Fortunately, this is possible. Communism and fascism were born and took root in societies demoralized by war, which is why all steps should be taken now to prevent the outbreak of war.

This is becoming particularly relevant today, as the smell of war hangs over Iran. Israel, which is facing a surge of hostile sentiment among its neighbors in the wake of their "democratic" upheavals, is not the only interested party. Many people in the advanced countries, and even some in Russia, look increasingly supportive of a war with Iran, despite — or perhaps owing to — the need to address the ongoing global economic crisis and failure of international governance.

At the same time, huge opportunities beckon in times of far-reaching change. Billions of people in Asia have extricated themselves from poverty. New markets and spheres for applying one's intellect, education and talents are appearing constantly. The world's power centers are beginning to counterbalance one another, undermining hegemonic ambitions and heralding a creative instability based on genuine multipolarity, with people gaining greater freedom to define their fate in the global arena.

Paradoxically, today's global changes and challenges offer the potential for both peaceful coexistence and violent conflict. Whether fortunately or not, it is up to us — alone — to determine which future it will be.

Sergei Karaganov is dean of the School of World Economics and International Affairs at the National Research University's Higher School of Economics in Moscow and head of the Council for Foreign and Defense Policy. © Project Syndicate