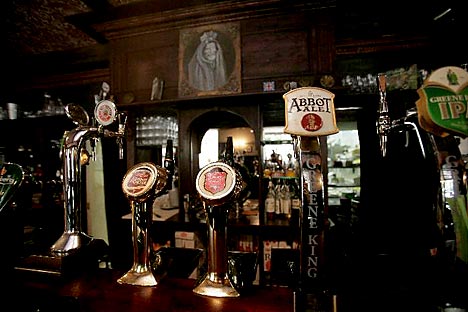 It can be a challenge to find an authentic English pub in Moscow. Source: Kommersant

English pubs first appeared in Moscow about 15 years ago. Today they seem to be everywhere, but finding an authentic one is harder than it seems. On the eve of St. Patrick’s day Russia Beyond the Headlines asked Moscow’s British community to assess the authenticity of the most popular pubs that claim to retain the real atmosphere of “good old England.”

Located in a basement, this popular chain of pubs features dark wooden walls and furniture, a lot of customers and noise, football and, certainly, beer. Bouhessi Khounchef, the  chef at the John Donne on Nikitsky Boulevard, uses recipes he learned in London to create British fare such as fish’n’chips, rib-eye steak, shepherd’s pie and chicken tikka masala with mango chutney. John Donne also has 14 different kinds of beer on its menu, and the average bill is 1,200 rubles ($40).

Wikki, 35, English teacher: “John Donne really looks very much like a true pub: it observes the best traditions. But to me it seemed more like a ladies' place than a place for virile recreation. You can hang out until morning there, or come there on a date.”

Patrick, 24, journalist: “Many Russian 'English Pubs' exaggerate things too much and make the place look as fake as it really is, but John Donne is quite understated, so it ends up looking more like a real pub. The selection of beer, particularly ale, also makes it a good choice for British people missing a pint of their local brew. The ale I had, surprisingly, actually tasted quite fresh too. I would recommend the place.”

One of the first pubs in Moscow, John Bull was launched in 1996. Snug, with rugs, pictures, photos, solid mahogany tables, heavy curtains and leather sofas, it has a very extensive menu, unlike a real pub. The original John Bull Blonde beer is brewed in Bedford, UK, especially for the Moscow John Bull chain. During the summer, they open up a café on the veranda with a special menu.

Andy, 36, English teacher: “Unfortunately, it made almost no impression on me. I remember being disappointed that there was no TV, as I'd been looking to watch my local football team, shortly after I came to Moscow.“

Along with fish'n'chips and steaks with Guinness, Rosie O’Grady’s menu offers Japanese and Indo-Chinese dishes. Divided into zones, the restaurant tries to please the variegated tastes of Muscovites and the recent fashion for oriental cuisine. You can pass from an Irish pub to a Scottish pub, a banquet hall and an Indo-Chinese room here. The menu also features a “Back in the USSR” section, with Russian and Ukrainian dishes including sauerkraut soup, Baltic anchovy sandwiches, pickles and dark bread and salted pork fat sandwiches. The average bill is 2000-2500 roubles ($60-$75).

Brett, 38, English teacher: “John Donne, John Bull and Rosie O’Grady’s are popular among foreigners and not just in Russia, so they are most often targeted at an international audience, hence their visitors are international. This is why they lose some of the authenticity. It is exactly like an Irish or a Scottish pub without a single Irishman or Scotsman, but with the right décor.”

The owners joke that the British Prime Minister himself prophesied that a pub would be erected on the spot. The designers used Victorian style elements in its décor, putting traditional English china in cupboards along the walls and Churchill’s pictures all around the place. The average bill in the restaurant, which prides itself on its collection of single malt whiskeys and a wide selection of cigars, is 1,500-2,000 rubles ($50-$60).

Louise, 29, Journalist: “Prices compared to the UK are insane - especially that they charge the highest prices for beers which we in Britain are consider to be the lower quality ones, and so usually cheaper, like Carling or Fosters. I honestly can't remember which they were selling but - Baltika is certainly better! I think it's the most expensive pub I have ever been in. Atmosphere - zero atmosphere.“

The place is essentially a hybrid of a club and an English pub. The space is divided into zones: a restaurant, a dance floor, and a concert hall. The menu from chef Alexei Kolobov, who has worked here since its launch, is designed to meet both the tastes of daytime guests and the nighttime concert audience.

Louise: “Prices are a bit more than in the UK for sure, but I think the atmosphere is definitely right. Lots of space, people milling around, standing at the bar chatting, etc. You don't get turned away if they have no tables and the bar staff are happy to serve you at the bar and give you some friendly banter. I always come down here for drinks after concerts at 16 Tons, even if it does mean I miss the metro home - I just think the atmosphere is nice and feels very authentic. It could definitely be cheaper, though.“

Andy: “16 Tons used to have the best beer in town – their microbrewery on site was doing some great things. But the last couple of visits I’ve been disappointed. The red ale is a bit too vinegary, and the dark ale has lost some of its depth. But their gigs often make up for it – they book some interesting bands there.“

This Moscow pub was named after the ceremonial entrance to the City of London and the name is highly symbolic: The pub’s atmosphere urges its visitors to quit the noisy streets and plunge into 18th century London. Customers are offered a standard menu topped by steak. As a plus, visitors can also partake of the latest gastronomic trends, such as dorado or bouillabaisse, Marseille style fish soup. The beer selection is also quite extensive.

Louise: “I find this pub is pretty low in atmosphere, it looks very 'fake.' In terms of authenticity they fail because they won't let you stand and drink, like in the UK, - even when it's really busy! If they don't have free tables to sit at, you can't come in, and they don't let you order drinks at the bar.“

Brett: “I like Temple Bar very much, but when a pub can accommodate over 100 guests, it’s already more of a club. Incidentally, almost all pubs are big in Moscow.”

The menu here is international and closer to that of a restaurant. On the other hand, they are promoting bartending culture here. They promise that everyone who comes to Molly Gwynn’s at least once can count on at least befriending the bartender on Facebook. The owners of the bar also started a legend that Moscow’s Molly Gwynn is the greatgreat…granddaughter of the Nell Gwyn from the 17th century who stole the heart of Charles II.

Brett: “Molly Gwynn's is definitely a bar with a British flavor. But I notice it is popular with Americans for some reason.”

Louise: “Not authentic at all! It's such a Russian pub, but actually the atmosphere is ok, once you decide that you are not going to have your typical British experience. What's not authentic, well, the girls dancing on the bars at weekends, super loud dance music so you can hardly talk and those chicks who wander round offering you tequila shots. All that said though, it's definitely lively which is a good thing for atmosphere. Prices are quite normal and fairly similar to UK.“