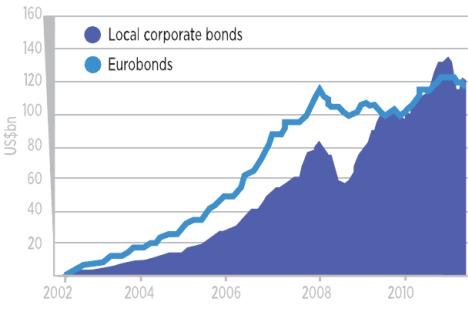 A change in Russian law easing requirements for foreigners seeking to invest in government treasuries has resulted in high demand for domestic bonds.

A revolution is underway in Russia’s domestic capital market. In the first week of Feburary, demand for Russian government bonds outstripped supply more than fivefold as traders in London and New York snapped up the high-yielding 10-year Russian paper.

“It was pretty spectacular demand, and the strange thing was that 70 to 80 percent of the bids came from foreign investors,” said a trader at Deutsche Bank, who preferred to remain anonymous. “I’ve never seen such high demand for [Ministry of Finance bonds] of this duration.”

The auction raised 35 billion rubles, ($1.2 billion), more than twice as much as originally targeted.

It was the first sale of Russian government bonds since a policy change opened up the local market to foreign investors without accounts or branches in the country. The new policy came into effect Jan. 1.

Further liberalization of the bond market will come in April when the Russian capital market will be hooked up to Clearstream and other international settlement systems, making it even easier for foreign traders to tap the Russian market.

The changes in the bond market are just the latest step in the ongoing reform of Russia’s financial system.

“Russia’s financial infrastructure is undergoing its greatest transformation since the beginning of the 1990s, when the country made the switch to a market economy,” said Chris Weafer, chief strategist with Russian investment bank Troika Dialog in Moscow. “These changes could result in a massive re-evaluation of assets and removal of any risk premium associated with Russian equity valuations versus other emerging markets in the next two to three years; we will start to see the first benefits arrive in the next six months or so.”

While higher-than-expected oil prices meant that Russia ended 2011 with a small surplus, the government expects a mild deficit to appear this year. In January, a deputy economics minister told reporters that Russia’s federal budget deficit in 2012 may amount to 1 percent of G.D.P. after a 0.8 percent surplus in 2011.

To finance this gap, the state is turning to the domestic market, where domestic borrowing overtook foreign issue of Eurobonds for the first time in 2011. According to the Finance Ministry, the Russian government’s domestic debt jumped 42.5 percent in 2011 to 4.2 trillion rubles ($138.8 billion), including government guarantees, half of which is in fixed coupon bonds. This is slightly more than the total outstanding Eurobond market, which was worth $115 billion at January’s end.

According to Weafer, these changes are just more proof of an ongoing shift in the center of gravity of the global financial system.

“The opening of the Russian market in the 1990s moved the global financial center from New York to London, while the rise of emerging Asia moved the center of gravity from Florence to the Black Sea,” Weafer said. “The financial center is still moving, as Hong Kong is the fastest growing market in the world. But as Moscow lies between London and Hong Kong, its geographic position is perfectly placed to emerge as a major regional market.”

Local vs. international bonds in 2011