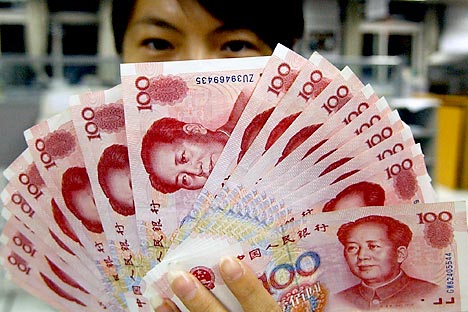 On 29 March, China intends to sign a memorandum in New Delhi with its Brazilian, Russian, Indian and South African BRICS counterparts to make national currency loans available within the bloc. This will reduce the influence exerted by the U.S. dollar in BRICS, while promoting use of the national currencies, primarily the yuan. Yet, for India and Russia, settlements with China in national currencies will only have political advantages in a few years time.

The Financial Times has reported that the China Development Bank (CDB) intended to sign a memorandum of understanding with the BRICS partners India, Russia, Brazil and South Africa at the next BRICS summit, slated for 28-29 March. The document is expected to be signed on the final day of the event.

The document will enable the CDB to extend loans to its partners in renminbi, China’s national currency. The development banks of the other member states that sign the document will be able to lend to other BRICS economies in their own national currencies – these include Russia’s Vnesheconombank, the Export-Import Bank of India, Brazil’s BNDES and the Development Bank of South Africa.

The Financial Times believes that the Chinese initiative is a result of the country’s intention to promote use of the yuan internationally and compete with the U.S. dollar for leading positions globally. In 2011, China exported $1.897 trillion worth of commodities, more than any other economy in the world. To compare: Russia ranks tenth with $498 billion in exports, and India is number 21 with $298 billion. Also in 2011, trade between India and China expanded by 25% yoy, and that between Russia and China by 42%.

China is the second-biggest global economy, yet, of the world’s five largest economies, it is the only one whose renminbi are neither a freely convertible nor a reserve currency.

China announced plans to rectify this situation back in 2011. In September, Zhou Xiaochuan, Governor of the People’s Bank of China, promised that the yuan would become a freely convertible currency by 2015.Even so, the central bank’s report, published in February, on the need for financial reform in China introduced serious amendments into the original timeframe.

The report outlined a three-phase shift towards convertibility of the national currency. During the first phase, which is estimated to take up to three years, China will clear the path for much more outbound investment, as “the shrinkage of western banks and companies has vacated space for Chinese investments”. The second phase, taking between three and five years, will see lending of the renminbi on international markets take off, along with the number of foreign trade contracts, the authors of the report believe. The third step, taking from five to ten years, will see the Chinese financing system strong enough for the local authorities to allow foreigners freedom to invest in Chinese stocks, bonds, land and property. After these three phases have been completed, the yuan will become a hard currency.

The recommendations provided in the report were unexpectedly liberal for the chief financial authority of a country that traditionally prefers tight economic controls and targets. According to specialists with the central bank, if the central administration impedes capital flows, the consequences might be catastrophic for the growing Chinese economy.

The renminbi will hardly be able to compete with the dollar on the open international market unless Beijing liberalises its financial policy, says Valery Mironov, Assistant Director of the Russian Institute “Centre for Development”. “The private sector, which accounts for most of the foreign trade and loan market in the BRICS economies, has no good reason to trust the renminbi. The stability of the currency is identified by the issuer’s domestic inflation. Consumer inflation rates in China are above those in Russian now, to say nothing of the stable inflation figures in the United States”, the expert told Russia & India Report. China’s consumer price index rose 5.4% in 2011 (reaching 6.4% in June), compared to 6.1% in Russia, 8.6% in India and 3.6% in the United States. Yet, in February, Beijing reported a CPI slowdown to 3.2%.

“Furthermore, for the renminbi to succeed as a hard currency, China should have a developed hedge market, but few investors in China are now engaged in price hedging”, Mironov said. In addition, Washington has repeatedly criticised China’s ambiguous currency policy – Beijing was said to manipulate the renminbi rate to support local producers, the expert added.

Mironov believes that renminbi trade and loan transactions conducted by foreign states with China have political rather than economic reasons.

This idea is shared by Samir Kapadia, researcher on Economic and Defence Policy Studies at Gateway House: Indian Council on Global Relations. In his articles published on the Business Insider news website, Kapadia analyses the biggest transactions between China and its BRICS partners to draw the following conclusion: if Beijing offers a cheap loan, it will surely compensate for possible losses by imposing additional conditions, as a rule, after the contract is signed.

For instance, in 2009, Rosneft and Transneft borrowed $25 billion from the CDB. The money was invested in a project to supply 15 million tonnes of Russian crude oil to China. But in 2011, China suddenly stopped paying for imports in full and demanded a discount. According to the Russian media, the suppliers had to agree, because the Kremlin values its cooperation with China and wants to be regarded as a “convenient partner”. As a result, Russia incurred $165 million in lost profits annually.

In 2010, the Brazilian mining company Vale borrowed $1.23 billion from China to build 12 cargo ships for delivering iron ore to China. But the wish to save on Chinese transporters resulted in a ban, imposed in June by the Chinese authorities, on new Brazilian ships calling at Chinese ports. China finally gave Brazilian ships access to its ports after a long pause, but imposed a new ban on Vale vessels again in January to protect domestic companies. The Brazilian concern had to redirect its deliveries to the Philippines, thus losing profits.

Kapadia issues warnings to Indian companies that plan to take out loans from the unpredictable and harsh creditor. India’s Reliance Communications borrowed $1.9 billion from CDB in 2011 and another $1.18 billion last month. The Indian analyst believes the company should study the experience of Russia and Brazil and be ready for the additional conditions that Beijing might impose at any time – if the company pursues long-term cooperation with China.