What went wrong for gays in India? 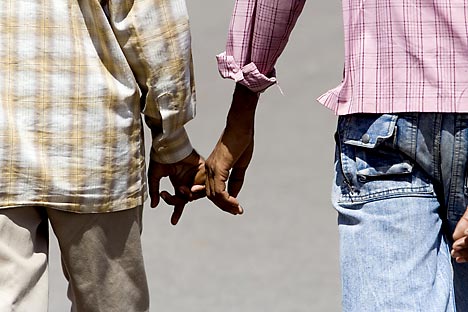 Except under the British, gays have never been persecuted in India so why the latent homophobia?

India’s attitude towards gay sex swings both ways – from ambivalent acceptance to downright denial. It’s typical of the way most Indians react towards, say, marriage – he can marry anyone he wants, but not my sister.

Three years ago the Delhi High Court repealed an 1860 colonial law and declared that gay sex between consenting adults was not a crime. The matter is with the Supreme Court where one ministry is opposing it while another says it is working with gays.

India may envision itself as a leading global power, but when you are only the 127th country to legalise homosexuality, it bespeaks a very low ranking on the development totem pole.

While the debate is being seen as India’s struggle to come to terms with its prudishness, the fact is that it is another instance of India getting rid of its colonial baggage.

Homosexuals – or for that matter, prostitutes – were never persecuted in classical India, but in fact had their own place in society. (Attesting to the liberal days India enjoyed during the Mauryan Empire 2300 years ago, the Greek ambassador Megasthenes wrote: “The Superintendent of Prostitution looked after public women, controlled their charges and expenditures, and appropriated their earnings for two days of each month.”)

That changed when the British colonialists arrived. The 1860 law was the result of a repressive Victorian moral code. It was the Englishman Thomas Macaulay who, while drawing up a civil code to supplant India’s ancient laws, decided that “whoever voluntarily has carnal intercourse against the order of nature with any man, woman or animal shall be punished with imprisonment”.

Macaulay’s words and actions were dictated by his Victorian mores, but it is a measure of how well he did his job that many Macaulayputras, or the self-serving sons of Macaulay, continue to cling on to such cobwebs on one pretext or the other.

It took India’s attorney general G. Vahnavati to expose that position, at the UN Human Rights Council. In 2008, Vahnavati told the Council: “Around the early 19th century, you probably know that in England they frowned on homosexuality, and therefore there are historical reports that various people came to India to take advantage of its more liberal atmosphere with regard to different kinds of sexual conduct.

“As a result, in 1860 when we got the Indian Penal Code, which was drafted by Macaulay, they inserted Section 377 which brought in the concept of ‘sexual offences against the order of nature’.

An integral part of India

While the West has victimised homosexuals and pursuers of alternative sexuality, and Islamic laws too prescribe harsh punishment for gays, India, in keeping with its liberal heritage, has always been a haven for homosexuals.

Vatsyayana’s Kama Sutra, the erotica classic written between 400 BCE and 200 CE, devotes a whole chapter to homosexual sex. The sage writes, “It is to be engaged in and enjoyed for its own sake as one of the arts.” The Kama Sutra categorises men who desire other men as of the “third nature” and refers to long-term unions between men.

Even more ancient texts like the Rig Veda (at least 5000 BCE) and temple sculptures depict sexual acts between women as revelations of a feminine world where sexuality was based on pleasure and fertility.

The Manu Smriti, a book of pretty conservative Hindu laws, merely prescribes ritual bathing and application of warm cow urine and dung for a person who has had sexual intercourse with anyone other than a woman.

In contrast, homosexuals and lesbians in medieval Europe were subject to unspeakable tortures. Most were burned at the stake; and they were the lucky ones. Others were handed over to specially trained executioners sent by the Pope. These unfortunate victims had their body parts sliced off bit by bit until only the brain and torso were left, and the person suffered a slow, painful death over a period of several days.

Author Alka Pande says alternate sexuality was an intrinsic part of ancient India. In her book The Androgyne: Probing the Gender Within, she says, "Right from literature to mythology and religion, homosexuality in ancient India is considered to be the ultimate and acceptable form of the sacred kind.”

"What else explains the fact that the pivotal character of the world’s longest and oldest epic, The Mahabharata, is Shikandi, a hermaphrodite, who plays a key role in the victory of good over evil. In the same text, Arjuna, ancient India’s most celebrated archer and warrior, disguises himself as a eunuch during the last year of his exile.”

In Same Sex Love in India, Ruth Vanita argues that the relative tolerance, the gray area between simple acceptance and outright rejection of homosexual attraction, can be primarily attributed to the Hindu concept of rebirth. Instead of condemning the couple, others can explain their mutual attraction as involuntary, because it is caused by attachment in a previous birth. This attachment is presumed to have the character of an "unfinished business", which needed to be brought to a resolution in the present birth.

Indeed, in 1987 when two policewomen in the state of Madhya Pradesh in central India got married, the locals rationalised that one of them must have been a man in a previous birth and the couple prematurely separated.

The comparatively liberal nature of Hinduism and the diverse array of philosophies available to its adherents have clearly played a part in the acceptance of homosexuals. While most societies have classified human beings into either male or female, Hindu society accepts their androgynous nature as well. This stems from the divine concept of ‘Ardhanarishvara’ – literally the Lord Who is Half Woman. Of course, it was a philosophical rather than social concept, but the message went out that homosexuality was acceptable in India.

Even the arrival of Islam did not vitiate the atmosphere for homosexuals. While women were confined to purdah and lost the preeminent role they enjoyed in pre-Muslim India, curiously, homosexuals and eunuchs thrived. For instance, Babur, who founded the Mughal dynasty in the 16th century, writes in his astonishingly frank autobiography Baburnama, about his indifference towards his wife and his infatuation for a “rosy-lipped” youth.

This ‘lack of morals’ was even cited as one of the justifications for the colonisation of India so the vast country could be brought up to par with “European values”.

Last month when the Supreme Court asked about the population of gays in India, the government came up with a figure of 2.5 million. God alone knows where they came up with that number because no official survey of homosexuals has been conducted in India.

So how many Indians are gay and lesbian? It may never be satisfactorily answered because even in highly developed countries people tend to hide their alternate sexualities.

It is a fact that in closed as well as Islamic societies few will openly admit to be gay (In 2007, Iranian Prime Minister Mahmoud Ahmadinejad told students at Columbia University that Iran had no homosexuals) whereas in more liberal ones like the Netherlands or Brazil, larger numbers will come forward.

For instance, in vibrant Rio de Janeiro 14.5 percent of the population is openly gay or bisexual and in most Europeans countries the figure is around 4 percent.

Even if we take the lower figure, then India has around 50 million gays and lesbians. This may be – no pun intended – a dipstick survey, but it suggests there are enough numbers to form a sizeable vote bank, which is exactly what works in India. A show of strength alone can improve the pathetic state of India’s homosexuals.

Right now, the old guard is fighting a rearguard action, which borders on the absurd. When the Supreme Court showed displeasure at the government solicitor describing gay sex as “highly immoral”, the Home Ministry jumped in and said because of a communication error the solicitor had read from the wrong file. Really? Does the government have two sets of files – one with homophobic rants?

It is interesting that while a few isolated nationalist leaders, Christian priests and the Muslim clergy are seeking to renew the ban on homosexuals, they are finding tacit support from the children of Macaulay who want to maintain status quo ante at all costs. There are few stranger bedfellows.