A new way to get what you want 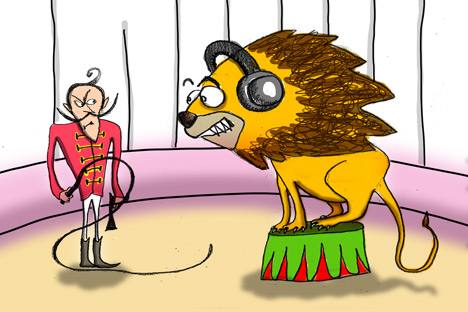 Can Russia develop a culture of professional lobbyists – and is it even a good idea?

During a meeting of the Presidential Anti-Corruption Council on March 13, Dmitry Medvedev announced that Russia had to put lobbying onto a solid legal footing. According to the Kremlin’s website, President Medvedev told the Ministries of Economic Development and Justice to start a public discussion and, based on its results and foreign experience and recommendations, put forward formal proposals to set up an institute of lobbying by Dec. 1. Medvedev also told the Ministry of Economic Development to conduct a seminar on organizing and legally regulating lobby activity by Aug. 1.

The main aim of these moves is to combat corruption, but after the meeting, head of the presidential administration Sergei Ivanov went further. Speaking on Russian television, Ivanov explained that the measure, which was contained in the 2012-2013 National Anti-Corruption Plan also signed by the president on March 13, should actually help to improve the country’s investment climate.

Ivanov noted that he had advocated “civilized lobbying” as long ago as 1999 and that “lobbying and corruption are very different things.” In the United States, he said, “professional lobbying is flourishing, but it is civilized, while in Russia lobbying and bribery are very closely associated with each other. That is the case, unfortunately, but we must approach it seriously so that we can create a national lobby institute. That is normal, and there is no need to get worried about it.”

Lobbying, Ivanov went on, is an institution that helps put pressure on the authorities in an open manner and promote the interests of private persons and corporate structures in the organs of state power with the aim of finding advantageous solutions. As an example of open and honest lobbying of small business groups, Ivanov pointed to how car manufacturers and dealers wanted to scrap the double Value-Added Tax levied on the sale of second-hand cars; it took the Car Manufacturers Committee of the Association of European Business two years to achieve this goal.

So while lobbying does exist in Russia and chalks up some successes, as always it remains to be seen whether a government initiative will actually achieve its aim, in this case setting up a national lobby institute to help fight corruption. Russia has a battery of structures and institutions with names identical or similar to those in Western democracies, but which in fact function very differently. The reason is simple: Despite all the headlines, by and large people in developed democracies abide by the law, and deviations from the rules and regulations are the exception rather than the rule, while in low-trust societies like Russia, the opposite is usually the case.

It is also typical of Russia that it is looking for its model to the United States, despite the fact that the vastly greater extent of lobbying there compared to European and other countries makes it yet another example of American exceptionalism. Lobbying is highly developed in the United States, with armies of former Congressmen, lawyers and political operatives trying to achieve favorable outcomes in legislation and regulation for their corporate, non-governmental and other clients at the federal, state and municipal levels. But since lobbying is very much a product of America’s unique political structure and culture, how far its approach can be applied in Russia is questionable from the outset.

On the other hand, lobbying in Russia is not the hot-button issue that it is in the United States, although other aspects of public affairs, especially public relations, do have a poor image here. In Russian, “lobbying” means asserting or advocating one’s own interests, but as Ivanov said, the distinction between lobbying and corruption in Russia is blurred. The respected Russian daily Nezavisimaya Gazeta, for instance, publishes regular surveys of the country’s most influential lobbyists, by which it means “civilized lobbyists” – it excludes those who bribe bureaucrats or members of parliament. As always, in its most recent list, published on Feb. 27, professional lobbyists in the usual western or American sense are conspicuous by their absence. Instead, the list is dominated by “first persons” from federal and regional government who managed to get their projects approved, along with CEOs of major companies.

Western opponents of lobbying would recognize this view of the practice as a cosy little club of the powers that be, which excludes the public. It was best summarized in the episode Bed of Nails of the classic BBC series Yes, Minister:

Proponents of lobbying, especially in its American form, on the other hand, argue that the sheer size of the lobbying industry and the laws and rules which govern it actually help protect democracy and especially minorities from the “tyranny of the majority.”

In Russia, where democracy is still in an embryonic stage and the broadcast media in particular are under much greater government control than in the West and cannot check government, regulating lobbying and fighting corruption are not just about formal institutions, but about everyone playing by the rules.