How to balance between freedom and commerce? 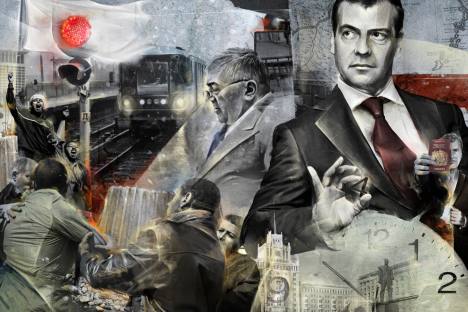 Graphic designer Alexei Kurbatov had no professional training in the field. Instead, he chose to start work as a designer at a printing shop early on. Later he decided to strike out on his own as an illustrator. He told to RBTH about his success.

In the spring of 2009, I decided to make drawing my life’s work and bought 20 of the most popular Russian magazines. When I realized that all these magazines were about cars, clutches, shampoos and fancy dog collars, I concluded that I had no business there unless I managed to carve out a niche for myself, which I set about doing. So, in a way, I owe my career to the wretched state of Russian magazine illustrations three years ago.

View the gallery: Balancing between freedom and commerce

When your portfolio consists not of commissioned works but works you have done on your own, you are tempted to think that it is normal to draw just what you like. I thought that, if they asked me to do some work for them, they wanted to hear me and show my work to others. In reality, the task of any illustrator has always been just one: to help sell the product, no matter how cynical that might sound. When a waiter brings you a steak, you enjoy everything at once, the plate, the piece of meat and the service. The same is true of a book or a magazine.

As I immersed myself in the profession, I realized that there were many good draftsmen but hardly any demand for their work. Most Russian magazines forego quality graphics because they are expensive. And the reader seldom asks why a 300-page magazine contains only photographs and not a single drawing.

The magazine Snob has been published since fall 2008 by the Zhivi media group founded by Mikhail Prokhorov and Vladimir Yakovlev. The magazine carries independent reviews of events, documentary stories and essays, literary works and extracts, art photographs, etc. It is aimed at Russian-speakers living in Moscow, New York and London.

The only exception from the rule is, perhaps, Snob magazine, which is why I like it. That project fulfils the book publisher functions of combining first-class texts and wonderful design. It is impossible in present-day Russia to present a successful, interesting, well-written and well-illustrated book for 160 rubles. I have cooperated with Snob for three years, enjoying absolute freedom. I have made more than 100 illustrations for them, deriving immense pleasure from the work.

People in this country think of an artist as someone highly spiritual and exalted. If he devotes most of his time to something down- to-earth, people tend to wonder whether he is an artist at all.

When it was proposed that I make drawings for the Lenta.ru agency, I had only a vague idea of what it was all about: throughout the following year, I was asked to portray six top news items of the week. Most of the news was negative: terrorist acts, bribe-taking, war, fraud and theft… The only exceptions were obituaries and football cup triumphs. It was not really about illustrations. It was the dust jacket designed to intrigue readers and make them want to know more about the key things. It was pure commerce. I realized that I had to perform certain artistic tasks in a systemic way and that I had to learn. When they massacred schoolchildren in Mexico, I had to make a drawing without blood. When Gaddafi was caught and killed, I had to portray this without cruelty. I constantly had to interpret the news, cutting corners and sometimes adding spice to the message. In an illustration with a subtle story and mood, I wanted to inject a bit of irony. One needs a sense of proportion and tact in order visually to combine the genocide of Armenians and the award of an Oscar Prize and, in-between, portray a ridiculed presidential candidate.

In addition to illustrator Alexei Kurbatov, there are other Russians of that name who have made their mark as a pianist, photographer and cyclist, respectively: each has his own story. Another person of that name was famous as finance manager during Peter the Great’s time (18th century). Who is next?

I am grateful to the commercial tasks for these lessons. As for spirituality, there has to be, somewhere high up, your own little flag indicating that it is you and that you are doing it with a sense of inner freedom. These works are a counterweight to an omnivorous approach, when you grab any order that comes along to make money. If you take that position, you might end up losing all the rest. For me, portraits of remarkable people are like a breath of fresh air. My personal tasks also include great attention to detail, building a bridge to reality. A picture should on no account be invented. Nor should it be something you have spied on. It has to evoke a response from the reader. This is perhaps the most challenging task I face every time.

Related: The lines have a will of their own

Finally, I would like to make this observation: anyone new to the profession is always vulnerable and inexperienced but I think one should retain that feeling all one’s life in order to do this sort of work. Let me explain… When they say ambition is good, I recall the still-lifes of the Young Dutch known throughout the world. But who would be able to name even two or three of the authors whose canvases adorn national museums? I think the author must fully submit himself to his work and not think about his name being remembered. Only then will he be able to learn throughout his life. Initially, it might seem like slavery, a renunciation of one’s identity, but for me this is real freedom.