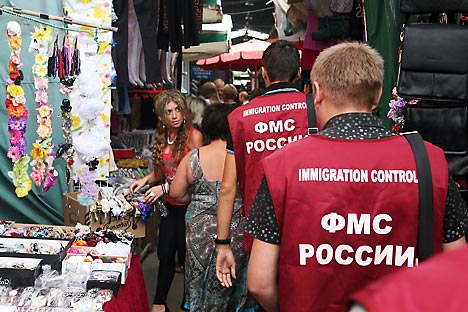 The experts said the government should boost its existing immigration funding to the Federal Migration Service (FMS) by 15 percent. The amount should be spent on programs like improving immigration control, fingerprinting, simplifying procedures for

Russian experts have published an immigration roadmap that requires the government to spend more money, as the country’s projected population decline looms large. In a policy paper published on Monday, the experts said a new financial infusion would allow the government not just to attract highly qualified foreign workers, but also to increase internal labor mobility for Russians. Part of the funding, the experts say, would go to reform Russia’s broken quota system, while the rest will go to improving Russia's image as an attractive country for migration.

To achieve significant progress in the country's worsening demographic situation, the Russian government would need to spend 86 billion rubles ($2.95 billion) on a new immigration policy, according to a new roadmap on immigration. A tripartite commission that includes representatives of trade union and government officials last week revised the roadmap, which was initially developed as part of the immigration program by the Federal Migration Services (FMS) with help from Strategy-2020 experts. Members of the commission said in their report that the intent was to provide a framework within which the government could ease demographic problems by generously funding a raft of population-boosting measures.

In addition to a gradually declining population, a report published by the States Statistics Services (Rosstat) on Monday showed that Russia’s workforce is ageing. The average age of an industrial worker, which was 39.6 years in 2005, has increased to 39.9 years in 2010, the report said. The decreasing number of their own nationals is forcing Russian leaders to explore ways of mitigating disturbing demographic consequences, while ensuring a new model for Russia's economic growth. The current roadmap, the authors claimed, will provide some answers.

Much of the newly recommended funding should go toward combating illegal immigration, which has become a serious problem for the government already battling a demographic crisis. The experts said the government should boost its existing immigration funding to the Federal Migration Service (FMS) by 15 percent. The amount should be spent on programs like improving immigration control, fingerprinting, simplifying procedures for issuing migration cards and the creation of migrant detention centers, they said.

Almost 14 million foreigners and stateless people legally arrived in Russia last year, according to the FMS. Every year, up to five million foreigners work in the country without work permits, said the agency, telling Russia Profile that only 1.7 million work permits were issued last year. However, the authors of the new immigration policy believe that "the country needs immigrants." Without the flood of immigrants, especially from the former Soviet States, the Russian headcount would have been seven million people less, said the experts. This has prompted the experts to earmark an additional 14 billion rubles ($480.5 million) to spend on adaptation and integration programs for migrants, including the creation of support centers for immigrants, language learning courses and courses on Russian history and culture.

The new policy also spelled out a fast track plan for attracting highly skilled foreign workers, as well as stricter procedures for hiring foreign employees by Russian companies. According to the experts, the FMS should receive an additional four billion rubles ($137.2 million) to create a special division responsible for attracting foreign specialists. The agency must also come up with measures that will motivate entrepreneurs and investors to move to Russia, including luring them with temporary and full-time residence permits as well as making it easier for them to obtain Russian citizenship.

The experts see the absence of a well-defined mechanism for determining the country’s skilled-labor requirement as one of the drawbacks of the previous immigration policies. To address such problems, including eliminating the horse-and-buggy quota system, experts said the government should spend 270 million rubles ($9.2 million) to “dramatically revise the old policy” by introducing new mechanisms for assessing skilled workers. In addition, the policymakers suggested the government allocate 200 million rubles ($6.8 million) to registered private businesses to help them “provide services for attracting and recruiting qualified workers.”

To attract enough qualified foreign teachers to Russia the experts want the government to spend another 2.5 billion rubles ($85.8 million). Another one billion rubles ($34.2 million) is to be spent as grants for Russian citizens receiving a professional education abroad in order to lure them back to the country. And on top of that, the experts said about 200 million rubles ($6.8 million) would be needed to promote Russia's image as "a country attractive to highly skilled migrants."

Another set of money-gobbling proposals concern encouraging internal labor migration in Russia, which they said should cost the government up to seven billion rubles ($239.8 million). The lion’s share of that amount will be spent to relocate people who live in more severe climatic conditions to other areas of the country, the experts said. A good part of the money will also be spent on supporting entrepreneurs who create housing and social infrastructure for internal labor migrants. The experts also recommend that the government spend ten billion rubles ($342.6 million) to resettle compatriots living abroad.