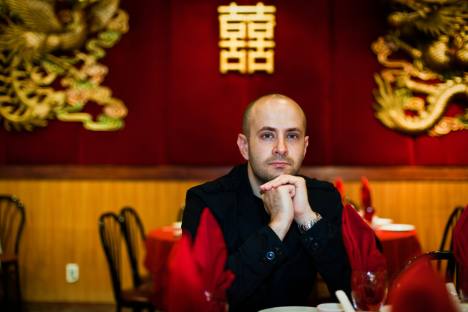 Yevgeniy Fiks, a conceptual artist and painter influenced by the creators of the vibrant, political movement called Sots Art, examines historical ironies and absurdities that shed new light on the inconstancy of the Cold War.

In his current show in Washington D.C., Fiks reproduces digital prints of 18 masterpieces, from Raphael to Velazquez, that Andrew Mellon bought from the State Hermitage Museum. By 1932, these stop-you-in-your-tracks paintings were the core collection of the National Gallery of Art (NGA).

As a tongue-in-cheek tribute to the unprecedented purchase that helped to fund Soviet industrialization, Fiks placed the prints of these masterpieces on silver metal plates with the title “Summary of the Fulfillment of the First Five-year Plan for the Development of the National Economy of the U.S.S.R.”

Yet in the same show, he also presents lush oil paintings of begonias that seem to clash, albeit exquisitely, with the conceptualized prints. Titled “Kimjongilias, a.k.a. Flower Paintings,” the large-scale, lyrical works refer to the flower festivals in North Korea in honor of the late leader, Kim Jong-il.

“What I really like about this exhibit is that someone could walk into the gallery and see two different artists. It’s the historical theme that connects them,” said Dianne Beal, the curator and dealer of Russian art who recently opened Blue Square. “This new series of prints on metal are entertaining, intellectual and aesthetically pleasing, which sums up the work I like to show.”

Adjustment to a new life

Related: Lights from the underground

Fiks immigrated to New York with his parents when he was 21 years old. He recalls this time in the mid-1990s as a period of significant changes for him, when everything was not only new, but not entirely understandable because of a lack of context.

“There was a long, long adjustment period,” he said. Before coming to the United States, Fiks trained as a painter at one of Russia’s finest art schools, which has the formidable title of The College in Memory of the 1905 Revolution. Afterward, he studied at the V.I. Surikov Institute in Moscow.

“When I came here, American contemporary art was not tangible for me. I couldn't understand what gave birth to abstract expressionism and pop art. Everything seemed flat. …But over the years I began to understand what was going on,” he said. These ambiguities about history and perspective would later fuel his work; Fiks continued his studies, receiving a BFA at Brooklyn College and an MFA from the School of Visual Arts in New York.

The Magnitogorsk Tour at the NGA

Fiks is taking on a new role as a radical tour guide. On Saturday March 24th, the artist will conduct his performance/tour of the NGA at 3:30 p.m.

The Alba Madonna is among the most significant Raphael paintings in the United States. The round painting, with its classical and Florentine influences, was created in 1510.

Related: The landscape of memory

But when Fiks, wearing his art historian/tour guide caps, walks up to the Alba Madonna during the NGA tour, he won’t say much about the painting because he wants visitors to think about something else. Fiks walks you through an irony of history when industrialist Mellon bought the Alba Madonna for more than $1 million—a lot of money in the 1930s-- from the Hermitage. Mellon also bought 20 other seminal works.

“I was really interested in documenting this symbiotic, pre-Cold War relationship,” Fiks said. “This idea of being chained to one another. How Mellon helped the Soviets to industrialize themselves while at the same time they bought American equipment and hired American engineers.”

Fiks said he likes to invade what people know and are comfortable with, especially when it comes to art and history.

View the gallery: The radical history of Yevgeny Fiks

His exhibit from 2009, “Songs of Russia,” involved a series of oil paintings that utilized images from Hollywood films about Russia made during World War II. The films were made to change the attitude of Americans toward the Soviet Union. The show reflected on a time, between Stalin’s Terror and 1950s McCarthyism, when the United States wanted Russia to look good.

The NGA tour examines another forgotten chapter in the Russian and American relationship. “I want to make an intervention with the museum,” he said. “It’s about me trying to perform this radical, inconvenient history.”

To attend the unofficial Magnitogorsk Guide to the National Gallery of Art, please send all questions on this e-mail: art@galeriebluesquare.com.