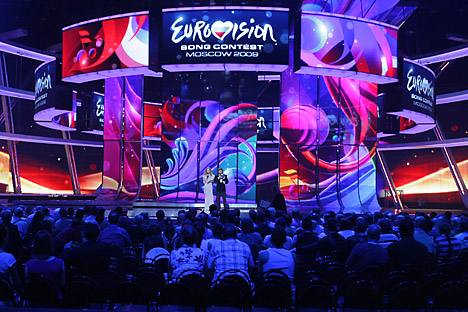 A short history of Russia’s love-hate relationship with Eurovision.

It’s no secret that Eurovision is a giant game of roulette: the criteria for winning are so numerous and the tastes of the audience so variable that often countries and participants have to rely only on luck. Russia, for all 17 years of its participation, has presented a real kaleidoscope of entertainers at the competition, banking on beauty, talent, and sometimes even on nothing.

Russia began participating in the Eurovision contest in 1994 and to this day, the Russian selection committee calls that year’s performance by singer Maria Katz, under the pseudonym Youddiph, a model for Russian contestants.

Despite a brilliant performance, noted by the contest’s jury, Youddiph took ninth place, and Russia’s next three contestants (Philipp Kirkorov, Alexei Kasinsky, and Alla Pugacheva) sent the country completely to Eurovision “outsider” status and stripped the country of the right to participate in the competition in 1998. Russian TV channels further exacerbated the situation by declaring a boycott of the contest, and thus depriving the country of Eurovision 1999. But Russia’s return to the European scene in 2000 was a triumph: at the competition in Stockholm, 17-year-old singer Alsou took second place with the song “Solo.”

For two years following Alsou’s triumph, there were no great ups or downs. At Eurovision 2001 in Copenhagen, pop-rock band Mumiy Troll took 12th place with the song “Lady Alpine Blue,” and in 2002 the group Prime Minister came in 10th. More successful was the 2003 entry, when Moscow sent to the contest the female duo t.A.T.u., who were popular in Europe and Asia and promoted the image of different sexual orientations. The girls took third place.

In 2005, Eurovision turned 50 and Russia marked its 10th year participating in the event. One year later, Russia sent the sexy young singer Dima Bilan, famous for his song, “I’m a Night Hooligan,” which he perfomed wearing a wife beater.

In preparation for Eurovision 2008, the Russians went all out – sending Dima Bilan back to the competition with figure skater Yevgeny Plushenko and Hungarian violinist Edvin Marton.

Ahead of the contest, a tearful video was shot for the song “Believe Me,” featuring a gravely ill boy, whose lung surgery the performers all helped pay for. The boy, of course, survived.

According to music critic Artemy Troitsky, over time, the style of the Russian contestants’ songs has acquired more and more of a folk tinge. Against this background, it’s not surprising that in the Eurovision 2012 contest, to be held in Azerbaijan, Russia will be represented by the Buranovskie Babushki, a folk collective from the Malopurginsky Region of Udmurtia that rehashes hits by Russian and foreign performers into the Udmurt language. Most of the group’s members are over 70 years old, and yet the song they’ve come up with for the competition is called, “Party for Everybody.”