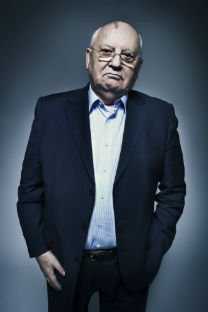 When today we hear about BRIC and multipolarity, hardly anyone knows about the Chinese or Indian dimensions of Gorbachev's foreign policy.

Thirty years ago, on March 24, 1982, Leonid Brezhnev made a speech in Tashkent that would set in motion the process of rapprochement between Moscow and Beijing. The general secretary, who had only a few months to live, had by then succumbed to senility and did not fully understand the implications of his Tashkent gesture. He would sign his name on any paper placed before him by his advisers, who in turn vied for influence over policy with ranking party, government and military officials, some of whom wanted to reach out to China.

In this case, the China-optimists won the day. We know why now: The breakdown of detente, U.S. sanctions and U.S. President Ronald Reagan's militant rhetoric shook the Kremlin leadership into trying to break out of international isolation by mending fences with China after a bitter 20-year feud.

Read more: A farewell to the nuclear triumph

In the 1960s, former Communist allies the Soviet Union and China quarreled over ideology, and in the 1970s they built up forces at their border. Chinese leader Mao Zedong sought safety from the Soviet "social imperialists" in closer alignment with the United States. Brezhnev denounced the "perfidious" Chinese to U.S. President Richard Nixon, warning that China was as ungrateful as it was unreliable. The Soviets, he intimated, had learned the hard way.

But the fears of old gave way to hopes of a better relationship: "The Chinese never befriend anyone for a long time," was how a top Soviet expert on China, Mikhail Kapitsa, put it several weeks after Tashkent.

Chinese reformist leader Deng Xiaoping picked up on the Tashkent signal and authorized secret negotiations with Moscow. This was a tactical maneuver at first. Deng was annoyed that Reagan was selling arms to Taiwan while holding back on technology transfers to China despite the promise of a partnership. "Loud thunder with little raindrops," the Chinese called it. But the Chinese-Soviet rapprochement developed a dynamic of its own, culminating in full normalization of ties in May 1989.

Soviet leader Mikhail Gorbachev played the key role in this process. His biggest contribution to a better relationship with Beijing was his willingness to treat China with respect, as a great power. "We have to understand the Chinese. They have a right to become a great power, we should not call it chauvinism," Gorbachev would tell his Politburo colleagues.

Read more: Celebrating the 25th anniversary of the Delhi Declaration

Gorbachev looked ahead. It was he, not Vladimir Putin, as many people think, who pioneered the idea of a "strategic triangle" that would bring together China, India and the Soviet Union. The concept behind the "triangle" was from the outset anti-American and one of Gorbachev's early ideas for winning the Cold War.

He was later distracted by an improving Soviet-U.S. relationship and by naive hopes of building what he called a "Common European Home." Also, India and China, divided by a history of antagonisms, were not easily drawn to the prospect of a — God forbid — Soviet-led "triangle."

Yet Gorbachev peddled the idea with remarkable tenacity and by 1988 saw Brazil joining the program in documents, which, if declassified earlier, would have given Gorbachev, rather than Goldman Sachs economist Jim O'Neill, the authorship of the term BRIC.

Despite his widely advertised endorsement of universal values, Gorbachev declined in June 1989 to condemn the Tiananmen massacre in China. Speaking at the Politburo, he explained, pragmatically: "We must be realists. They, like us, have to hold on. Three thousand [students killed]. … So what?"

Most important, U.S. sanctions against China in the wake of the crackdown gave a unique opening to the Soviets to build up the "triangle." The United States, Gorbachev told Indian Prime Minister Rajiv Gandhi, wished them all ill — something "even worse" than Tiananmen for the Soviet Union, India and China.

When today we hear about BRIC and multipolarity, few think of Brezhnev's pathetic performance at Tashkent in 1982, and hardly anyone knows about the Chinese or Indian dimensions of Gorbachev's foreign policy. Who would expect that Gorbachev, the gravedigger of one bloc, was the prophet of another?

Seeds were sown then that would lead to the alignment of the up-and-coming powers at the United States' expense. Russia has no hope today of leading in this arrangement as the Soviet leaders had anticipated in the 1980s. Whether China is willing to lead remains to be seen. Even if it does, would Russia, India or Brazil be willing to follow China's lead?

Then there is the danger that each of the aspiring members of the BRIC club will opt to sacrifice common interests for bilateral advantages vis-a-vis the United States.

Consider China. Kapitsa's tried maxim — "The Chinese never befriend anyone for a long time" — rings even truer, and it applies just as well to Russia now as to the United States then.

The Kremlin, publicly flamboyant about China, is for its part secretly apprehensive of the southern neighbor, and it continues to wage a completely hopeless battle for influence over countries like Mongolia, North Korea and those in Central Asia.

India and China boast of growing economic ties, but old wounds of a border war fought 50 years ago continue to poison this relationship just as they did when Gorbachev first brought up the "triangle."

As for Brazil — and, more recently, South Africa — their involvement in the old love-hate triangle of Russia, India and China continues to be more exotic than substantial. The more the merrier, perhaps. On the other hand, the "triangle" of old has enough internal contradictions even without being further weakened by far-flung partnerships.

Gorbachev never understood what his prospective partners in the "triangle" were supposed to have in common – save for a vague sense of anti-Americanism. Today's BRIC needs a better underlying rationale if it is not to end up as a pipe dream of a Gorbachev variety.

Sergey Radchenko is lecturer in the history of Asian-American relations at the University of Nottingham Ningbo China. He is the author of "Two Suns in the Heavens: the Sino-Soviet Struggle for Supremacy, 1962-67."