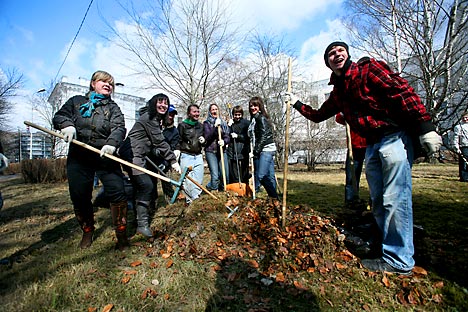 When spring does arrive, there is a renewed energy in the air. City administrations invite volunteers to help clean up the streets on what is called a “Subotnik,” a spring cleaning Saturday. Source: ITAR-TASS

After a long and seemingly endless winter, the hint of spring is enough to lift the hearts of the residents in Russia’s Far East. Lovers are out on the prowl, students find the “spring excuse” not to study and a spirit of gaiety and celebration pervades the place.

Another long winter just refuses to go away in the remote Trans-Siberian regions of Russia.  It’s late March, but Yuzhno-Sakhalinsk, the capital of the oil-rich Sakhalin Region, is still witnessing lows of minus 15 degrees Celsius. While it warms up during the daytime, an outsider sees very few signs that spring is in the air.

Maslenitsa and Women’s Day bring a false sense of spring in the distant outposts of the country as it takes almost two more months before the Russian Far East experiences what is considered spring by European or North American standards. There are no chirping birds and blue skies and one can forget about seeing leaves on the trees for a very long time. The snow keeps falling right through April, a month of transition when the winter sunshine in the Russian Far East gives way to gloomy skies.

Every hint of warmer weather, however, lifts the spirits of the Sakhalin faithful. Each time the sun finds its way past the late March and April clouds, jubilant Far Eastern Russians celebrate the arrival of spring. Students tend to sink into languor and are not inclined to study for their exams, using what is called the ‘typical spring excuse.’ For those who are single, spring is a great excuse to go for an evening walk to look for potential boyfriends or girlfriends.  Girls usually walk in pairs near the main parks and squares in search of a new love. The implied message is “we are free and are looking.” Needless to say single young men have a better chance of getting a new partner if they also walk in pairs.

It really begins to feel like spring in the Russian Far East from late April, but there have been instances of snowfall even in June! As the weather gets warmer, it brings its own string of problems. For starters, the snow starts to melt during the day and there is nothing worse for an office-goer in formal attire than to get splashed with muddy water by a speeding vehicle. Since the temperatures fall below zero at night, the water freezes at night and the sidewalks once again become slippery. Injury tends to follow insult in the spring! There is also the looming danger of icicles hanging off buildings. It’s not uncommon to hear about people ending up in hospital after being hit by a slab of ice. There are rarer stories of sharp icicles piercing people to death.

Emergency ministry officials in Sakhalin are particularly busy during the spring when they get distress calls from ice fishermen who end up stranded on ice floes drifting towards the Pacific Ocean. There is also a danger of avalanches on the island’s highways. Those that live on the fringes of forests have to deal with hungry bears, waking up from hibernation. Sakhalin’s Brown Bears have a reputation for aggression that can only be matched by their cousins on the Shantar Archipelago, a group of islands on the Sea of Okhotsk, near Khabarovsk. One spring, officials and passengers at the Yuzhno-Sakhalinsk Airport were shocked to see a bear and her cubs walking on the main runway! The only thing more dangerous than a hungry bear in spring is a hungry bear with her cubs during the season. Forest officials brought the situation under control, but the resident Muscovites couldn’t help but chuckle about the situation that helped reinforce their stereotypes about the ‘Wild Far East.’ People living in the suburbs of Khabarovsk have an even more dangerous neighbour lurking in the nearby forests: the world’s largest tigers!

The unpredictable spring weather can play spoilsport, but the days get longer and Far Easterners celebrate the fact that the sun sets late in the evening. After all, there’s more daylight after office hours to set up the flower beds in the dacha (summer cottages). Although Russians tend to hate the rain, the first rainfall of spring is an event that is celebrated with as much gusto as the arrival of the monsoon in South and Southeast Asia. Children run outside to savour it and get drenched by the first showers – the first real sign that spring has arrived. It’s time to put away the skis and take out the bicycles and time to open the garages and go on long drives. Sweaters replace thick coats, but it’s always handy to keep warm clothes in case of a sudden cold spell from Magadan or some other northern region.

When spring does arrive, there is a renewed energy in the air. City administrations invite volunteers to help clean up the streets on what is called a “Subotnik,” a spring cleaning Saturday. This is when tonnes of vodka and beer bottles, chocolate and potato chip wrappers and assorted items of junk, which emerge when the snow melt, are removed from the streets. The sight of green grass after nearly six months also gives many people a moral lift.

Before the birds return from the south, many take a ceremonial dip in still-cold rivers, lakes and the sea, which are just free of their ice covers. Although the waters are just a few degrees above freezing point, this is a safer alternative than taking a dip in the mid-winter by drilling a hole on the ice. The spring bath is usually followed by picnics and barbeques in the forests, which still have remnants of the long winter. Spring is also the best time to go white water rafting. The only people sad to see the winter go are the skiing and snow-boarding enthusiasts, for whom it’s an agonizingly long wait till the snows set in again.

The yearly renaissance finally comes after a long, much-dreaded and cold Russian winter. When the snow finally melts completely, adults and children alike are in the best of spirits, bursting with the excitement of the impending May Holidays and summer vacations.

Ajay Kamalakaran was the editor of the Sakhalin Times from 2003-2007.