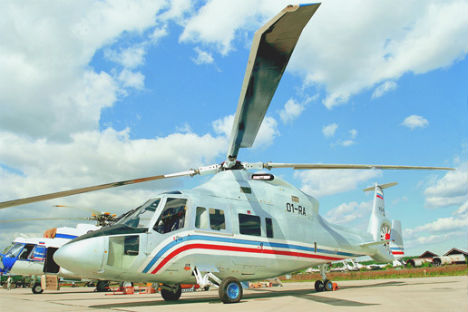 Russian Helicopters' chief executive, Dmitry Petrov, can pilote windmill.However it's hardly a bigger challenge than those that Petrov faces in his daily work.

Readers of Britain's Times might have been astonished when they opened the newspaper one April morning last year and saw a full-page advertisement of a helicopter flying over Buckingham Palace and carrying a huge white gift box tied up with a white ribbon.

It was Russian Helicopters, a state-owned defense contractor, that placed the advertisement in an effort to congratulate the royal heir on his wedding day.

Russian Helicopters' chief executive, Dmitry Petrov, said such a decision was made because "things just came together" — the wedding, a helicopter exhibition in London, in which his company participated, and company plans to proceed with an initial public offering on the London Stock Exchange last year.

1984-93 – Armed forces of the Soviet Union and Russia, served in various positions

Best weekend getaway: With the family: in winter, skating or skiing; in summer, outdoor recreation near the water.

He said Russian Helicopters didn't receive any feedback directly from the royal family, but he hoped that William appreciated the idea.

"I know that he saw the advertisement. … I think he liked it," Petrov said.

Petrov's love of flying is evidenced by the toy models of whirlybirds on the tables in his office. Despite his calm demeanor as a former military man, Petrov starts smiling and gets emotional while talking about piloting, which he started learning a couple of years ago and compares to watching a 3-D movie.

"It's a feeling of three-dimensionality that you don't have while driving a car. The difference is like between 2-D and 3-D," Petrov said.

"It's difficult for the first 15 hours, almost impossible. You want to stop every five minutes and get off the helicopter. But then you get the needed skills and start to enjoy it."

Piloting a helicopter, however, is hardly a bigger challenge than those that Petrov faces in his daily work.

Petrov, who joined Russian Helicopters in 2010 following a stint at Oboronprom, where he oversaw the helicopter-manufacturing industry, had his work cut out for him as he sought to reap dividends from a recent consolidation of all the state's helicopter assets into Russian Helicopters. The creation of the holding was supposed to increase competitiveness for the state-owned industry, which was reduced to ruins in the 1990s after the Soviet collapse.

Uniting the country's production facilities — including those in Rostov-on-Don, Kazan, the Far East and the Buryatia republic — into one holding has helped ensure that the companies did "not die separately," Petrov said.

It also allowed financial, scientific and human resources to be concentrated in one place and strengthened Russian Helicopters' position as the world's third-biggest manufacturer after U.S.-based Sikorsky and French Eurocopter, he said.

The U.S. Defense Department picked the Russian-made flying machines over those by Sikorsky last year for use by the Afghanistan army, purchasing a total of  21 Mi-17s.

Although the move prompted the U.S. helicopter giant to complain about discrimination, Petrov remained unfazed, calling the situation "the usual competition."

Petrov said Russian Helicopters has ambitious plans for growth this year, targeting the production of more than 300 helicopters compared with 265 in 2011.

Among his personal goals for 2012 is passing an exam to finally get his helicopter pilot's license, which he said he hasn't been able to do earlier because of time constraints.

Although Petrov is unlikely to use the document more often than his driver's license, he said in an interview with The Moscow Times that he would like to swap his car for a helicopter to get to the office — if aviation regulations are changed to allow city overflights one day.

This interview has been edited for length and clarity.

Why isn't it common among senior officials in Russia to use helicopters to get to work?

It's a very expensive means of transportation. It's more expensive than a jet because a helicopter's construction is more complicated and a client always pays for the option of  vertically taking off and landing at any place.

But the major hindrance is current legislation, which bans flights above big cities like Moscow and St. Petersburg. The infrastructure is weak as well. There are a few helicopter landing pads in Moscow, but they are intended for law enforcement agencies or hospitals.

The first thing to do now is develop helicopter connections between Moscow and St. Petersburg for firefighting, ambulance services and business flights. And that's what we intend to do in the near future in cooperation with domestic carriers.

But private flights might be possible in the long term if officials move their offices out to enclaves beyond the Moscow Ring Road. With amended legislation and the gradual development of helicopter services, flights are likely to become more affordable.

Why did the U.S. Defense Department purchase Russian-made equipment to be used by the Afghanistan army instead of supplying U.S.-made helicopters?

The Americans are widely known for their patriotism, but when it comes to military expenses, they spend money wisely. Russian-made helicopters have a number of advantages, including reliability, efficiency and the ability to work under any conditions — including strong wind, high humidity and mountainous terrain. Given all these qualities, the equipment has a competitive price.

Another reason is that Afghanistan has the proper infrastructure to use Russian-made helicopters. Service personnel and pilots are acquainted with our equipment, which they have used for training, so it won't take them long to master these helicopters.

What challenges do you face while selling abroad?

The major challenge is after-sale services. But we are probably luckier than other manufacturers because we don't have to start from scratch thanks to a rich Soviet legacy. Maintenance facilities have been preserved in many countries in Western Europe, Africa, Latin America, the Middle East, Central Asia and former Soviet countries, and we use them as a base to build service centers with our foreign partners.

We hope to approach the standards of our nearest rivals — Sikorsky and Eurocopter — by increasing the speed and quality of our equipments' after-sale services.

We're also in talks to open a service center in South Africa.

How do you deal with corruption?

It's not an issue for us because we have a serious bonus system that allows the front-office specialists — those who work with clients directly and theoretically have a chance to take bribes — not to give in to temptation. In fact, taking bribes makes no sense for them because they get very good compensation for working effectively.

Who forms the core team of the industry? Does it attract young people, or does it rely on Soviet-era specialists?

When the company's consolidation was under way, we had two groups of employees — those under 25 and those above 50.

We faced a lack of people of the most productive age — 30 to 40 years old — because nobody wanted to work in the defense industry in the 1990s and early 2000s for reasons known to everyone: low pay and low prestige.

We are addressing these issues. We actively cooperate with universities that focus on our profession and hold an annual contest called Helicopters of the 21st Century for both students and young specialists.

Now we see positive signs in our HR statistics. People have started to approach us because the industry has become more attractive.

How does your military background help at your current job?

It helped me understand the nature of work with the armed forces, first in the Soviet Union and then in Russia. Now, when half of our orders come from defense agencies, it's easier for me to work with them and understand their interests.

It's also no secret that a military education makes people more disciplined. It has always helped me at work.