Trapped in a Nightmare 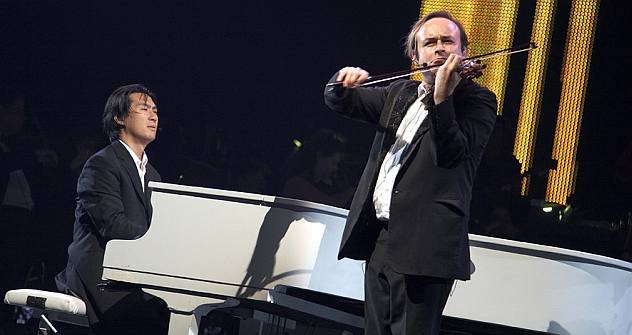 Aleksey Igudesman and Hyung-Ki Joo could have been successful traditional chamber musicians, but instead they combined their musical talents with their love for comedy.

Several years ago, a video began making the rounds on YouTube. In the video, a pianist and violinist play classical music… and manipulate it in ways even the most astute listeners never thought possible.

Russian violinist Aleksey Igudesman and British pianist Hyung-Ki Joo have been performing their show, entitled “A Little Nightmare Music” for eight years. They have performed in most major European cities, and now they are bringing their tour across the pond, to the Stern Auditiorium at Carnegie Hall on April 17.

Their concerts begin with the proper decorum – the two come on stage wearing full concert dress – but it doesn’t take long for the nightmare to begin. The pair mix Gloria Gaynor’s “I Will Survive” with phrases from Bach and Chopin, Igudesman playing like a Jewish fiddler and singing the lyrics with a heavy Russian accent. Unable to agree whether to play Mozart or the theme music to the 007 series, they end up playing both at the same time.

Their skits, filled with a mix of simple humor a child understands and witty references noticeable only by professional musicians, are crafted to make their concerts accessible to a wide audience. They call their show “A Little Nightmare Music” because it embraces the nightmares of a musician at a concert. “Very often, when we go to concerts and things go wrong, that inspires us,” said Joo. “When something goes wrong, you realize that that’s what makes people wake up and curious; there’s the sense of what’s going to happen next?” The two get inspiration from their own mistakes on stage – “in the end, our show is full of mistakes,” Joo says. “In fact, our show is just one giant mistake.”

Igudesman and Joo became friends as students and the prestigious Yehudi Menuhin School in the UK. After graduating, Igudesman went to the Vienna State Conservatoire while Joo came to New York to attend the Manhattan School of Music. But eventually Joo followed his friend to Vienna, and they have been collaborators since. Joo’s wife even calls Igudesman her husband’s “first wife” as the two spend so much time away from home on tour.

In late 2010, Igudesman and Joo brought their show to the Great Philharmonic Hall in St. Petersburg. It was the first time Igudesman had returned to his native city since leaving more than three decades ago – his family emigrated to Germany when he was six. At the performance, Igudesman took every opportunity as usual to shock the audience – which was made up mostly of older ladies expecting an evening of chamber music and waking up in what many of them likely considered a nightmare of their own. At the end of the concert, Igudesman spoke about how thrilled he was to come back to play in his hometown. Never one to pass by a chance to get a titter, he said in a serious tone, “I went back to my childhood home – or at least I think that’s where it was – and it had become a sex shop.”

Despite their antics, Igudesman and Joo are excellent musicians and likely could have made a career in mainstream classical music with a bit of luck. But for them, such a staid existence didn’t feel right; they loved theater and comedy – especially in the often-humorless classical music scene. When videos of their performances went viral, what they were doing resonated with many people, including several high-profile musicians such as Emanuel Ax and Gidon Kremer, who wanted to be a part of the fun, too. Fans were astonished and delighted to see a serious musician of such stature as Emanuel Ax on stage being shoved off the piano stool by Joo. The pair has not limited their collaborators to musicians either; they have done videos and concerts with Sir Roger Moore and made a show called “the Music Critic” with actor John Malkovich.

In addition to their musical comedy collaborations, both Igudesman and Joo have individual projects; Igudesman has worked with Hans Zimmer on several Hollywood film scores and Joo has given his own concerts as a pianist. But the two always come back to the Igudesman and Joo show. “When I’m working with Hans Zimmer for example, I always think, oh this is great, I can bring this back to our show,” said Igudesman. “A Little Nightmare Music” has evolved over the eight years that it has been on the road, but this fall, the pair will come out with something totally new, “And Now, Mozart” which will, fittingly, be premiered in Vienna. American fans hope to see its Carnegie Hall debut sometime soon.